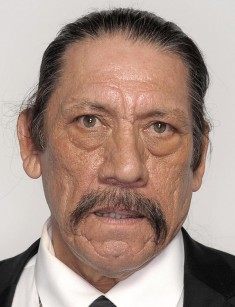 Danny Trejo is an American actor of the Spanish-Mexican origin, who has become popular due to the roles of the villains.

Trejo was born on the 16th of May, 1944 in Los Angeles (USA). The actor's parents are the housewife Alice Rivera and the builder Dan Trejo. The director Robert Rodriguez (Sin City, Kill Bill: Vol. 2, Four rooms) is a cousin of the actor. However, the brothers got acquainted before the shootings of the movie Desperate when Trejo was already fifty years old.

At the age of eight, Trejo began to smoke marijuana. By the words of the actor, his uncle acquainted him with the drugs. At the age of twelve years, Danny threatened his relative that if he stopped supplying him with "weed," he would report to the police. Since then the actors could have any drugs at his disposal.

On the streets of Los Angeles, Trejo learned to fight – the future actor even had a desire to become a professional boxer. But his great plans weren’t destined to happen – for the drug possession and the armed robberies Danny was put in the prison.

"At some point, I had to choose whether I’m going to become a drug dealer or a laborer. I have chosen the first and plunged into the world of crime", - the actor confesses.

The chronology of Trejo's imprisonments is rather controversial. According to one of the versions his detention term expired in 1972. By another version, the actor spent ten years from 1959 till 1969 in the camp for the minor offenders and six Californian prisons.

In prison, Trejo completed his studies at the school and later concentrated on the sport and training. At the age of twenty-two Danny even became the champion in boxing in the feather and middleweight.

After the actor was set free, he decided to be done with his past forever. He has joined the state twelve-step program of the rehabilitation of drug addicts. By Trejo’s own words, since then he never used drugs.

By chance the 40-year-old Trejo got to the movie set of the picture Runaway Train (1985) where he met Edward Bunker - the scriptwriter happened to serve a sentence in the same prison with Trejo.

Having remembered Danny’s boxing skills, Bunker offered the man $320 a day for the training of the actors Eric Roberts and Jon Voight for the scenes of prison boxing fight Without hesitations, Danny accepted this invitation. The director of the picture Andron Konchalovsky appreciated how selflessly Danny was training the actors and decided to make the Mexican the hero of one of the episodes.

Since then the actor with the expressive appearance and good physical shape was invited to the shootings in the movies and series – he was showered with the offers. Trejo was working on five-six projects during a year. At present, there are about 280 roles that he has performed and the personages which he has voiced over.

In 1993 on the movie set of Bound by Honor (shot by Taylor Hackford) the scene of the rebellion was shot in San Quentin State Prison where Trejo was serving his sentence. Danny was engaged in the movie as a consultant. Later the actor confessed:

"We shot the scene in the block C where I spent almost three years of my youth. I felt devastated".

The actor took part in the creation of 30 documentaries. Moreover, he participated in the video of Taiwanese musician Jay Chou for the song "DoubleBlade" and appeared in the cameo-role in a couple of tens of the series and shows.

It’s difficult to overestimate Trejo’s fame: he has become one of the characters of the series of American DMZ comics, a couple of computer games and even songs – the Mexican alternative rock band Plastilina Mosh and the Russian rapper Tony Raut dedicated the songs to the famous actor.

Trejo lives in his own house in San Fernando Valley. Together with his spouse Debbie Shreve Trejo has lived for 12 years. The couple has two children. In the summer of 2009, Trejo and Debbie filed for the divorce.

The actor owns Mexican restaurant of La Brea Avenue in Los Angeles, his coffee, and beer brands, and also the companies of the products and goods.

Trejo is 168 cm tall. The actor has many tattoos on his body. The most noticeable of his tattoos is a senorita on his breast.

The actor continues to take part in the feature movies and series and to take part in the TV shows and projects. At present, there are 15 movies on the postproduction stage with the participation of Trejo. Moreover, a couple of films will be released already in 2017. Danny will enrich his filmography with the participation in one more trash fighter under the title Machete Kills in Space about Machete Cortez. Though, the exact date of the picture’s release isn’t known yet.

The actor will produce the documentary biopic Inmate #1: The Rise of Danny Trejo. The director of the movie Brett Harvey who had shot the documentary Culture of the Use telling about the drugs. The premiere is set for autumn of 2018.

Recently Danny Trejo has concluded the contract for the participation in Man at Arms show, which the first series will be released at the beginning of June 2017. Within the program, Trejo will meet the historians, constructors, and master of martial arts to test all the types of the weapon.

Except for the shootings, Trejo is working on the creation of the trademark of the ice-cream and the opening of donuts-café at the northeast corner of Santa Monica Boulevard and Highland Avenue. 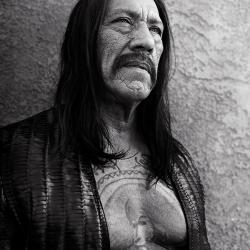