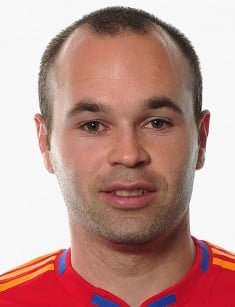 Andrés Iniesta is the soccer icon of the last 20 years, the outstanding player and record holder in the number of the Primera División titles. Contemporaries say his name with respect and often encourage the younger generation to follow his example. The player has won everything possible except for the FIFA Ballon d'Or.

Andrés Iniesta Luján was born in May 1984 in the Spanish province Albacete. His parents Maria and José Antonio worked as waiters in restaurants; the family had to save money. To buy a pair of boots, the father had to collect money for three months.

The boy was interested in sports but saw his activity only as a hobby; he could hardly imagine his social network pages would be full of photos and videos on professional soccer in the course of time. Iniesta played for a local team; sports scouts noticed him during one of the competitions.

At 12, Andrés left his native town Fuentealbilla for Catalonia where the best soccer youth academy La Masia was preparing players. This school is famous for its graduates: Xavi, Lionel Messi, Víctor Valdés, and Carles Puyol. It is the basic academy of Barcelona. The teenager was eager to play for Real Madrid, and he had such an opportunity, but the parents had the last work and chose Barcelona because its location was advantageous.

Throughout four years at the academy, Andrés reached the second team; he began to play in the third most important league Segunda Divisiоn B.

In 2001, Iniesta got to the national youth team and won the UEFA European Under-17 Championship. He also gained two victories in similar competitions in other categories. Serra Ferrer who managed the first eleven of the Catalonian team at that time invited the talented young man to the legendary Barcelona. According to the contract, Andrés got money and bought a house for his parents; his father quitted his job due to the new bank account.

Andrés debuted in the UEFA Champions League game. Since that time, his midfielder career has been connected with the blue and red team. Andrés protected Barcelona in more than 600 matches and scored more than 50 goals.

Statistically, Iniesta is the most title-winning player in Spain: he has seven Super Cups and five Cups, four Champions League victories, and three FIFA Club World Cups. The sportsman is the eight-time champion of Spain and two-time champion of Europe; he has been included in various symbolic teams.

In 2010, the player scored the decisive goal in the final game of the World Cup and brought the national team the first Cup in its history. Andrés joined the Red Fury four years earlier and debuted in the friendly game with Russia; he scored his first goal against England in 2007. Based on the results of the tournament, Iniesta was nominated for the Ballon d'Or. At the end of Euro-2012, the sportsman had another nomination and the four-time title “the player of the match.” Overall, Iniesta has played more than 120 games in the Spanish team.

In 2013, Barcelona extended the contract with Iniesta until 2018. After long negotiations, the club agreed to pay him €12 million annually. When the expiry date was close, the club had a qualitatively new agreement with Iniesta: it was life-long. Andrés has the right to quit at any moment if he announces his decision until April 30 of a year.

According to Eurosport.ru, the sportsman’s age and previous traumas made him a slow player: he rarely spent more than 15 minutes on the field. Considering his status as one of the top-paid players, Iniesta’s patriotism related to the Catalonian club is a kind of selfishness. The player’s perfectionism and the desire to finish his career beautifully do not give him the chance to be honest with himself.

Andrés met his future wife Anna Ortiz in 2008 at their friends’ party. Rumors had it that the shy player could not dare to come to the beauty for a long time and hesitated to propose because he was afraid she would say no. In comparison, the young woman fell in love immediately. The people close to the player describe the different situation: Andrés was determined while Anna was in awe of the star.

The young people did not make their relationship public, but journalists recognized the player’s lover: Ortiz always appeared in the stands when Barcelona played. Anna and Andrés married when the player’s team won Euro-2012, and Iniesta became the best player. There were 700 guests at the 1920s-styled wedding; the ceremony took place on the Mediterranean seaside, in the ancient Castillo de Tamarit.

In April 2011, the daughter Valeria was born. In March 2014, Anna miscarried. To support his beloved wife, Iniesta skipped a La Liga match. The midfielder brought his anguish and pain to the field: experts believed that Andrés was at his peak and showed the excellent game which made him a candidate for the Ballon d’Or.

In May 2015, the son Paolo Andrea was born. Again, the player’s spirits and family atmosphere influenced his results: Iniesta got Copa del Rey and won the Champions League. In spring 2017, Anna gave birth to the second daughter Siena.

Andrés does not have a model physics (his height is 171 cm.), but advertisers are always honored to create ads with the Barcelona player. Nike, Sony, Qatar Airways, and the broker company UFX collaborated with him.

In spring 2018, Iniesta broke another record: he played the 22nd quarterfinal game in the Champions League. The match with Roma was the 129th game of the midfielder in this league; he is the 6th player in the history on this indicator.

The 2018 World Cup is probably the last competition for Iniesta. In his interview with Le Figaro, the player expressed his hope to have enough strength to play in Russia.

Rumors have it that the Chinese club Tianjin Quanjian is waiting for the Barcelona midfielder. The contract is said to include an unusual paragraph: the player must advertise the wine produced by Bodega Iniesta – the company the Spanish player owns. The player plans to promote his products in China, and 2 million bottles have already been delivered there.

According to La Liga News.co.uk, Andrés has discussed the three-year contract with the Chinese Super League. The contract may be extended for a year; the total sum of the agreement will be $37 million.

The Lazio midfielder is the candidate for the position of the Barcelona captain. According to La Gazzetta Dello Sport, the club will have to pay minimum €30 million. 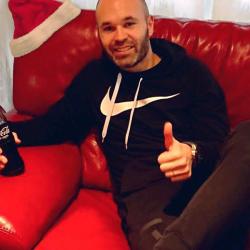