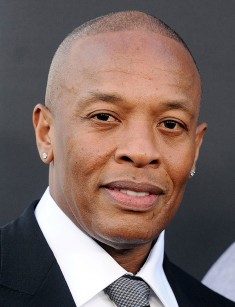 Dr. Dre (Andre Romelle Young) is an American rapper and producer. He became famous in the music industry for his collaboration with Snoop Dogg, Eminem, and Ice Cube. Young also developed a new music style: G-funk.

The future musician was born in Los Angeles on February 18, 1965. The rapper’s mother, Verna, was 16 years old at that time. After the boy was born, his parents married. The father, Theodore, gave his son the name “Romell” because he was a fan of the group The Romells.

Three years later, Verna and Theodore broke up because of some fundamental disagreement. Andre lived in a problem area; initially, he attended Vanguard Junior High School, but he transferred to Roosevelt Junior High School later: the mother did not want her son to go to the school with the high crime level.

While the young man was receiving his education, the mother was building the relationship with Warren Griffin whom she had met in Long Beach; the woman married him in a while. Dr. Dre had three sisters and a brother. Verna’s second son is the musician Warren G.

The rapper was changing one school after another. In 1979, the young man went to Centennial High School, but he was expelled for low academic performance. Thus, Andre had to attend Fremont High School. When he was a high-school student, he tried to find a job. When the young man was rejected in an airline company, he decided to devote himself to music.

At some point, the musician went to the club Eve After Dark where he had the opportunity to watch local DJs and rappers work. The young man was inspired. In this club, the fateful meeting with Antoine Carraby occurred; at the same time, the pseudonym “Dr. Dre” appeared.

Gradually, the artist was developing his music. Together with his colleague Ice Cube, Young recorded songs and cooperated with the label Ruthless Records. Soon, the duo decided to organize a rap group and invited Eazy-E, Arabian Prince, MC Ren, and DJ Yella. The musicians called their music “gangsta rap.”

The fame was not long in coming: the group offered the audience something different from what had been done before. Their songs contained swear words and tragic plots. The album Straight Outta Compton proved to be immensely popular; boys and teenagers were particularly fond of the song “Fuck the Police.”

Soon, Dr. Dre turned over a new leaf in his career and started working solo. The cooperation with the owner of Death Row Records brought good results. 1991 was marked with a new page in the rapper’s life: he and Snoop Dogg performed in a duo. The next year, the first solo album The Chronic was released.

The musician engaged himself in G-funk music that was becoming popular in the rap world. By 1995, the relationship with Death Row got tense, and Dr. Dre left the company to found the label Aftermath Entertainment.

Young planned to develop as a rapper, but he also paid much attention to his label. In 1998, thanks to the producer Jimmy Iovine, Dr. Dre began to patronize a talented guy from Detroit, Eminem.

In November 1999, the rapper’s second solo album, 2001, came out. The musician invited his friends including Snoop Dogg, Eminem, and Xzibit, to work on the album hits. “The Next Episode” was one of the album songs.

2001 was a bestseller and broke many records; it became platinum six times. Even the five-year gap between the musician’s two albums did not influence the number of sales. The hits “Forgot About Dre” and “Still D.R.E.” were released in this album.

In 2000, Young was pretty successful: he was named the producer of the year and received the Grammy Award.

20 years of work brought only two solo albums. Dr. Dre planned to have the third one, Detox, released; it would become the end of his career as a rapper. The producer shared some information about this work on MTV news: he was going to make the album conceptual. However, when the work was finished, no hits were presented: Young spent all his time interacting with young talents.

After much reflection, Dr. Dre decided to release the album in 2005, yet another delay followed. Eventually, the premiere was scheduled for 2009. DJ Khalil, Nottz, and Bernard “Focus” Edwards Jr. contributed in the album creation.

The story with Detox took much time and energy. In October 2009, the musician told journalists he had been working on this album for ten years. He changed the date of the release for 2010. Young’s friend, the musician The Game, claimed the album would be incredible and drive crazy millions of fans.

2010 came. There was no information about the new album of Dr. Dre. By the end of the year, fans welcomed the song “I Need a Doctor”; Eminem and Skylar Grey took part in the track recording. In 2011, the music video for this song was released.

Thanks to this work, the musician’s fans learned what caused the long pause in the man’s career: in 2001, Dr. Dre had an accident and went into a coma. Eminem was always there with the rapper and supported him. Nevertheless, Detox was never released.

There was no news about the rapper for a while. In August 2015, the third album Compton was officially presented. The album hits became the soundtrack for the movie Straight Outta Compton. Critics favored Dr. Dre’s new work. In 2016, the musician’s unreleased tracks came out.

When Dr. Dre turned 16, his girlfriend, Lisa Johnson, told him she was pregnant. The boy Curtis was born; he is known in the world of music as Hood Surgeon. The relationship with Johnson did not last for a long time.

In 1988, Young met Jenita Porter. The young woman gave birth to the second son, Andre Young Jr. However, he died at the age of 20; the media reported that heroin and morphine overdose was the cause of death.

In 1990, the man began to date Michel'le who presented the label Death Row Records. Their son Marcel was born soon, yet the relationship lasted only for six years: the musicians decided to break up.

Andre did not grieve alone for a long time. Soon, he proposed to Nicole Threatt. The next year after their marriage, their son Truice was born. In 2001, the daughter Truly was born.

Nowadays, Dr. Dre focuses on his family and producing activities.

According to the producer’s colleagues, Young spends days in the studio and creates new pieces of art for his supervisees. As for the solo career, Dr. Dre stopped considering it.