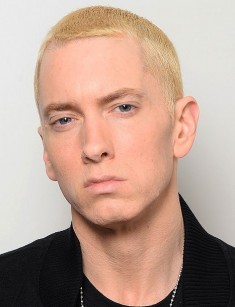 Rolling Stone called Eminem the king of hip-hop and placed him 83rd in the 100 greatest artists of the planet. The influential chart company Nielsen SoundScan named Eminem the leader of music sales in the 2000s. In ten years, his fans purchased 100 million copies of his albums: no singer has ever managed to achieve it.

The American rapper, producer, composer, and actor has won 15 Grammy and Academy Awards. MTV placed Eminem 9th in the top 10 MCs list and 13th in the 22 Greatest Voices.

Marshall Bruce Mathers III was born in the provincial St. Joseph, Missouri, on October 17. 1972. He was the only child of the singer Debbie Mathers who married at 15; her husband was eight years older. Eminem has Scottish, English, German, Swiss, and Polish roots.

When the boy was six months old, the father left the 18-year-old wife and his child. Since that time, Marshall never saw his father. To rise from poverty, Debbie moved from one state to another; she stayed in Detroit suburban area where black people lived. In this place, the future star went to school. Black peers regularly beat the while boy. In winter 1983, Marshall spent in a coma ten days after such a fight.

In the mid-1980s, the family came back to Kansas City where Eminem got close with his uncle Ronnie who was the fan of rap. In 1987, he gave his nephew the tape with the works of the rapper Tracy Lauren Marrow also known as Ice T. as a present.

Marrow’s music changed Marshall’s perception of rap dramatically. Eminem fell in love with the music style that he could dream of nothing else. The musician took part in battles and conquered the public admiration. Simultaneously, he had to deal with black MCs’ assaults: they claimed that rap was the Afro-American music and whites could not become rappers a priori.

Eminem’s friend and the group D-12 member Proof played the significant role in the musician’s career. The 17-year-old young man had a collection of his own works that he presented in nightclubs. At this time, he took the pseudonym “M&M” which later transformed into Eminem (“Em-and-Em”).

At 17, Eminem finished his school studies and devoted himself to music. To earn his living, the musician washed dishes in a restaurant and performed at night shows on a local radio channel.

In 1995, the rapper debuted in the group “Soul Intent” where Proof and DJ Butterfingers used to take part. Together with the group, Eminem recorded the album “Biterphobi” which became a rare thing: because of the lack of financing, only the limited number of copies came out. The track “Fucking Backstabber” was devoted to the Afro-American rapper Champtowny.

In 1996, Eminem had his debut solo album “Infinite” released. At that time, Detroit was full of rap music, so people did not notice this work. Because of this bad luck, Eminem got depressed: for two years, alcohol and drugs became the most important thing for him. The singer had to take carу of his wife and a year-old daughter; he could not even buy pampers for her. Eminem confessed that he was at the edge of committing suicide and looked for a “real” job.

The black rapper Dr. Dre, Eminem’s childhood icon, helped the musician come back to art: he found Marshall’s demo album and got interested in his works. In 1999, he made Eminem have the song “Slim Shady EP” rereleased; the track became a hit.

In the supper battle Rap Olympics in Los Angeles, Eminem got the second place. The alternative “white” rapper was awarded by the magazine “Word Up!” He also signed the agreement with Dr. Dre. The famous musician worked with his young colleague on his first full-fledged project “The Slim Shady LP” (1999) that turned Eminem into the global star.

The songs’ provocative lyrics became the subject of many arguments: some people believed that Eminem was showing the society’s ills, others were sure he was stirring up hatred to women, LGBT people, and humanity in general. Eminem admitted his words were shocking, but his actions were not; he did not want to become the second Tupac.

The album “The Marshall Mathers LP” is full of songs that raised many questions. The compositions “The Real Slim Shady” and “Stan” proved to be the best hits. Eminem performed the latter together with the singer Dido. The provocative music video was recorded. In one of the album songs, the rapper said unpleasant words about the mother, and she pressed charges against him. LGBT activists announced they would boycott Eminem’s nomination for the Grammy Award. However, the musician got three Grammys in 2001.

In the same year, Eminem joined the group D12 that had the album “Devil’s Night” released in 2002. The compositions “Fight Music” and “Purple Pills” became extremely popular.

In 2002, the music video “Without Me” and the album “The Eminem Show” appeared. The work gained the status of the diamond album; more than 20 million copies were sold all over the globe.

Because of the seven-year time-out, rumors had it that the musician had finished his career. Still, the rapper’s new albums “Relapse” and “Refill” gave his fans much joy in 2009. In the next year, the album “Recovery” came out; the song performed with Rihanna “Love the Way You Lie” was included there. This music video got 1 300 million views.

In 2013, Eminem worked on the eighth album “The Marshall Mathers LP 2” and presented it in November. The musician was giving concerts as well.

In the third single of the album “Rap God,” the rapper utters 1560 words in 6 minutes 4 seconds. Eminem is the first person in the history who had more than 78 million “likes” on Facebook.

In 2001, Eminem played a minor role in the movie “The Wash.” The real movie debut pertains to the 2002 movie “8 Mile” that the musician himself called semi-biographical. The movie is not the detailed picture of his life: it gives some ideas about the man’s teenage years in the figure of the poor rapper Jimmy Smith. The soundtrack for this movie “Lose Yourself” brought Eminem the Academy Award.

In the video game “50 Cent: Bulletproof,” the artist voiced the corrupted cop McVicar. Eminem appeared as a doll in the TV show “Crank Yankers” and web series “The Slim Shady Show.” Initially, the program was broadcast on TV; later, the DVD version came out.

Eminem took part in the tragicomedy “Funny People” by Judd Apatow; he also starred with Christina Aguilera in the series “Entourage” final episode “Lose Yourself” (the seventh season).

In 2012, the actor played in two documentaries: “Something from Nothing: The Art of Rap” and “How to Make Money Selling Drugs.” Two years later, the comedy action movie “The Interview” was released; Eminem played himself. The Internet sales brought Sony Pictures $40 million.

In October 2008, Eminem presented his autobiography “The Way I Am” where he honestly described how he fought poverty, drugs, depression, and fame. The mother Debbie Nelson also created the autobiography “My Son Marshall, My Son Eminem.”

Eminem has been married to Kimberly Anne Scott twice. They met at school. At some point, Kim and her twin sister lived at Eminem’s place because of her family problems. The young people were dating for ten years and married in 1999 when the rapper’s career started developing. The marriage lasted until 2001.

Five years later, Eminem and Kim married again. At this time, they lived only six months together. The couple divorced and agreed to bright up their daughter Hailie (born in 1995) together.

In 2002, the musician was dating the actress Brittany Murphy starring in “8 Mile.” The lovers tried to love together, but no marriage followed.

Eminem is a controversial person who has been involved in dozens of scandals 90% of which are connected with his songs’ lyrics, not actual situations.

In 1999, the rapper’s mother Debbie Nelson had a conflict with her son: she was upset that Eminem represented her as the insane alcohol and drug abuser. Debbie demanded the $10 million compensation for the moral damage caused by the song “My Name Is,” but the court denied her request.

In 2001, the world was watching the conflict between Eminem and Mariah Carey: the rapper claimed had had the intimate relationship with the diva, and she demanded attention while Mariah denied the affair. In his song “Superman,” the musician devoted several unpleasant lines to the singer. He also mentioned Carey in his track “Bagpipes From Baghdad.”

In one of his songs, Eminem was offensive to Christina Aguilera, although they used to be on friendly terms.

Eminem’s ex-wife also got under his aggressive art attack: when they were married, the rapper often “murdered” her. After the divorce, the musician beat Kim’s new boyfriend with a gun and got the two-year suspended sentence.

In 2009, the MTV Movie Awards scandal with the rapper took place. Sacha Baron Cohen dressed like Bruno (the gay TV presenter) soared above the scene, the angel wings behind his back, and “accidentally” landed on Eminem’s head. The rapper left the event, swearing; as it turned out, the incident was planned, but Eminem did not know about the half-naked Baron Cohen.

In spring 2017, Eminem’s fans were pleased by the news about the upcoming album. Fans scrutinized the Instagram photo of Paul Rosenberg, Shady Records CEO, and Eminem; they saw the words “April 9” on the musician’s hand and decided it was a hint to the new album release date.

Eminem’s daughter, 21-year-old Hailie Jade Scott has her own Instagram page and posts interesting photos there. The rapper’s only child is not going to follow in the footsteps of her parent and has not chosen her career yet. Many people expect her to become a model, but the young woman takes her time. She graduated from school with honors and entered the University of Michigan. 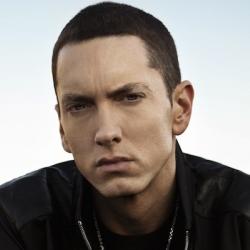