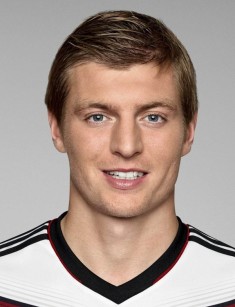 Number 8 in Real Madrid, the German national team midfielder at the FIFA World Cup 2014, Toni Kroos is at the peak of his sports career. He is one of the best playmakers whose passes almost always bring good results and finish with goals to opponent’s gates. The German player is also a family man who tries to pay attention to his beloved wife and children and spend as much time as possible with them.

Toni Kroos was born in East Germany, the university town Greifswald, on January 4, 1990. The future soccer player’s family is close to sports: the mother Birgit Kämmer was a professional badminton player who started teaching biology after she finished her sports career. The father Roland Kroos used to be a wrestler and changed his occupation to train young soccer players.

Toni’s younger brother Felix is also engaged in soccer, although his career is not as successful as that of his brother. Similar to Toni, Felix is a midfielder; he plays in the German League for Union Berlin.

The star midfielder was not a good student: the boy did not have enough time to play soccer and do his homework.

When the boy had to choose, he preferred to concentrate on soccer practice. Toni played for the school team. Initially, he was not considered a promising player.

Roland Kroos trained both sons. Eventually, the young man became a professional player thanks to his determination, hard work, and the father’s assistance. He turned into a popular player, and many world’s clubs would gladly have him.

The local amateurish club Greifswald was the future star’s first team. In a while, the young sportsman transferred to Hansa where his father was the coach. Toni was included in the national youth team and protected his country’s honor as a midfielder.

In this team, the Bundesliga clubs’ agents noticed the young player. Kroos chose Bayern Munich and signed the contract in 2006. The 17-year-old player became the youngest team member.

In 2007, the midfielder debuted in the game against Energie Cottbus. In this match, he assisted two times; overall, he played well. The season was successful for the team: the club won the championship and DFB-Pokal (the German Cup).

In the next season, Bayer Leverkusen loaned the sportsman which was necessary to master the player’s skills and apply his abilities to practice. In this team, Toni scored his first Bundesliga goal. Unfortunately, the season was not favorable for the team, although later things improved. At that time, the former Bavaria mentor Jupp Heynckes became the club’s head coach, and Toni Kroos became the team leader.

It was not surprising that Kroos came back to Bavaria after the achievements in the new season. The sportsman played in Bavaria until 2014. Simultaneously, he joined the national team in 2010.

During FIFA World Cup 2014, Kroos was particularly resultative. In the game with Brazil, the German team defeated the opponent bitterly: the score was 7:1. The midfielder scored two goals and assisted effectively.

2014 brought many accomplishments. Toni Kroos was the UEFA and FIFA Team of the Year member; fans named him the best player, and the sportsman got the title of the IFFHS World's Best Playmaker.

In 2014, there was a turning point in the player’s career: he transferred to Real Madrid. According to unofficial sources, the transfer cost was about €25-30 million, and Kroos’s salary was €12 million annually.

The midfielder was happy to join the legendary team of the present days and become Cristiano Ronaldo’s teammate. In one of his interviews, Kroos confessed he finished his career in Bundesliga and could not imagine he would ever return to Bavaria.

In 2016, there were many rumors that the midfielder might transfer to Juventus. The club also considered Ivan Rakitić and Marco Verratti. Juventus was ready to pay the recording sum, €60 million, to have the halfback. Still, the transfer did not take place, and Toni stayed in Real; his salary increased twice as much.

According to statistics, Toni Kroos is one of the best playmakers all over the globe; his trademark is the resultative and accurate passes to his teammates. The player’s right-foot kick is strong and exact.

Kroos is a conservative player and never changes his habits. He wears the same pair of boots to save good luck. Since 2007, the sportsman has never been given a red card and had no severe violation of rules cases; one could hardly say he is hot-tempered and unstable.

The halfback has been in love with one and the same woman, the beauty Jessica Farber. The young woman works in the sphere of tourism; unlike famous sportsmen’s wives, she is not a public figure.

There are the tattoos with the time of birth and names of the player’s children on his arm. On the Internet, rumors have it that Jessica has the first child’s name on her arm.

The player is a charity work activist: he organized the charity fund to help sick children.

In the 2017-2018 season, Real Madrid won the UEFA Champions League again. At the beginning of the season, Toni had an injury, just like his colleague Luka Modrić. He could have to miss the decisive matches but managed to recover by the final game.

Zinedine Zidane, the former head coach, emphasized that Toni Kroos was an ideal member of the team and had great potential.

At the FIFA World Cup 2018, Kroos played in the national team. The player said some pleasant words about Russia: the midfielder said he expected the best results from the championship organizers and also believed his national team would perform excellently.

As the sportsman guesstimated, should his career continue in one of the Russian soccer clubs, he would view it calmly.

The tall, handsome player (the midfielder’s height is 182 cm., and his weight is 78 kg. according to some sources) is considered to be one of the most stylish sportsmen in the tournament; his haircut has contributed to this “achievement.” 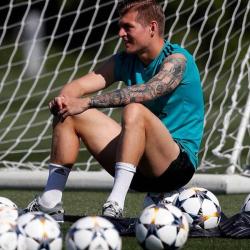