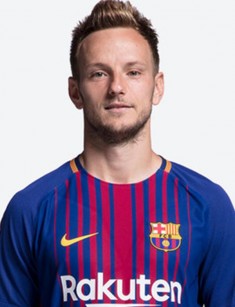 The famous Croatian national team member Ivan Rakitić nicknamed “The Rocket” in the Croatian press could have failed to enter the team. The player’s parents had to leave their home country because of the war, and Ivan was born in Switzerland. In this country, his talent developed, so he had the chance to join Spanish clubs Sevilla and Barcelona. Still, as the sportsman finished supporting the Swiss at youth championships, the 19-year-old midfielder debuted in his motherland’s national team. Rakitić’s choice was the tribute to his parents who had sanctified a lot for their son’s soccer career.

Ivan was born on March 10, 1988, into the family of a soccer player: his father Luka Rakitić used to play in the Bosnian club Čelik Zenica in his youth. Because of the difficult economic situation in Yugoslavia and the Yugoslav Wars, the man dreamed of fleeing abroad. His elder brother lived in Switzerland, and the soccer player decided to visit him. In Switzerland, the team of the small town Möhlin invited the sportsman, promised to find him a regular job, and help with the documents necessary for the whole family to move. Although the team could not climb higher than the fourth division, the man accepted the offer.

As Ivan’s father finished the soccer career, he found a construction job after his son was born. When the elder boy Dejan and Ivan grew up a little, the mother got hired by a local factory producing socks. Rakitić called this time peaceful and calm, although the family had little money. The boy had only one uniform, and his parents had to save on their nourishment to buy their son a pair of boots.

At seven, Ivan visited the father’s home village Sikirevci situated in the eastern part of the country; the house where Ivan Rakitić’s grandparents from the paternal line used to live was preserved. The village was destroyed by military operations; the child was shocked to see those gloomy landscapes. The relatives used to avoid talking about the war, but they had to tell the children the truth about what had happened in their country and why they had had to leave.

At eight, Ivan’s father took the boy to the match between the Swiss club Grasshopper and Croatian Dinamo Zagreb where Luka’s friend and former teammate Goran Jurić played. The Croatian team defeated the Swiss and scored five goals. A decade later, the emotions evoked by that game helped Rakitić choose his national team.

Ivan began to play soccer at four. For three years, the parents took their son to the Möhlin-Riburg team school. At seven, the boy entered the Basel youth club; at 14, he debuted in the junior team and became the Basel U-16 team captain two years later. When the young man turned 17, he was offered to play for the club’s adult team.

Rakitić debuted for the Swiss team at the end of summer 2005. He appeared on the field in the UEFA Europa League qualifying match and played against the Bosnian club Široki Brijeg. Basel managed to defeat its opponent in both qualifying games and made it up to the quarterfinal where Middlesbrough won. Despite the successful session, Rakitić did not play more in the League in the 2005-2006 season; he also took part in a single match for the national team.

In contrast, the coach Christian Gross involved the new player in many games. As the first eleven member, Rakitić participated in 33 Swiss Super League matches. The midfielder scored the recording 11 goals. The statistics gave him the chance to become the best young player in the national championship.

The player spent the next four years in Schalke 04. After the Brazilian halfback Lincoln left the team, the German club bought Rakitić for € 5 million. The sportsman played in the new team a month and a half after the transfer: he stepped in for one of his teammates at the 70th minute against Stuttgart; at the 75th minute, he scored his first goal.

In the first season, Rakitić injured his ankle and missed seven games. Overall, the sportsman played 97 matches for the club and scored 12 goals some of which led Schalke 04 as high as the Champions League quarterfinal. In spite of this, the player’s cost lowered after the Schalke 04 performance; in 2011, Sevilla bought Rakitić for € 2,5 million.

The player’s career in Sevilla was ambiguous. During his second game when Sevilla played against Racing at the Primera, Rakitić scored “an own goal.” He made it up in the next match against Hércules when he scored the debuting goal. The sportsman had a bad injury: a fracture in his foot. It took him four months to recover; he had to miss the championship final game and the summer camp.

The season 2013/2014 brought the breakthrough: the coach of Sevilla gave him the position of the team’s captain. Ivan’s two goals to Real Madrid and the series of successful matches made him the best player of the Spanish championship. There was a penalty series in the game with Benfica; the Spanish wrenched the victory out of the Portuguese team’s hands.

Fans’ strong emotions were intensified by Rakitić’s action: holding the legendary Cup, the Sevilla captain kissed the center defender Daniel Carriço. Although Ivan had a year-old daughter and explained his behavior, there were many rumors about the sportsman’s orientation. However, they were not confirmed.

After the success in Sevilla, Liverpool and Barcelona took an interest in the player. Eventually, the Catalonians signed the contract; the transfer cost was € 18 million. Ivan debuted in the game against Elche in La Liga and scored the first goal to Levante’s gate.

Ivan’s number in Barcelona is four. Rakitić has played four seasons for the team and won 11 trophies. Denis Suárez, Andrés Iniesta, Sergio Busquets, and other famous midfielders play together with him. According to Sport Express, Rakitić’s salary in Barcelona was € 7 million in 2015.

Ivan is married: the world’s soccer star met Raquel Mauri when she worked and offered him a drink at the Spanish hotel bar. At that time, the player was going to sign the contract with Sevilla. However, the communication was almost impossible: Rakitić did not speak Spanish while Raquel could not speak the languages Ivan could.

This challenge did not stop Ivan: he stayed at the hotel for three months, gradually learned Spanish, and tried to court the young woman. The couple married in 2015, two years after their first daughter Althea was born. In 2016, the second daughter Adara was born. Raquel posts family photos on her Instagram page.

Ivan Rakitić’s height is 184 cm.; his weight is 78 kg. Together with Filip Bradarić, Milan Badelj, and the captain Luka Modrić, Ivan is one of the tallest players in the Croatian national team.

Ivan Rakitić often comments on his colleagues’ performance. He has often admitted his teammate Lionel Messi’s playing. Before the game between Argentina and Croatia at the FIFA World Cup 2018, he said that his team had its own “Messi” – that is how he called the midfielder Luka Modrić.

In spring 2018, Barcelona won the trophies of two national tournaments: La Liga and Copa del Rey. However, the Catalonians could not gain the Championships League: Roma defeated Barcelona at the quarterfinal match. In addition, Rakitić broke a finger and had an operation. By the decisive game for the country’s Cup, the player recovered.

Ivan Rakitić was the first eleven member at the first game of the Croatian national team at the FIFA World Cup 2018 in Russia. At the 30th minute, he was shown a yellow card. After the tournament, Ivan will come back to Barcelona; his contract expires in 2021. 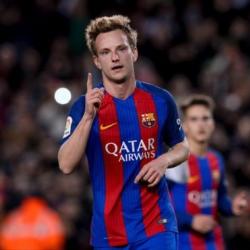