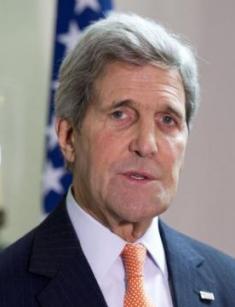 John Kerry is an influential American politician who served as the United States Senator from Massachusetts for almost 30 years and held the position of the Secretary of State of the United States from 2013 to 2017. He became widely known to the public all over the world since 2014. Then, he took a tough anti-Russian position due to the internal Ukrainian conflict and stood out by the general instability in the US policy on the Middle East.

The assessment of Kerry's activity is controversially evaluated not only in the USA but around the whole globe. Some consider him an experienced player in the American political team, while others, on the contrary, see him as an indecisive state official. "Chameleon," they call him, the man, who has never shown an established position in any controversial issue throughout his entire career.

John Forbes Kerry was born on December 11, 1943, in the family of Richard John Kerry, a Foreign Service officer and lawyer, and Rosemary Isabel Forbes, a nurse at the military hospital and social activist, a representative of the wealthy Forbes dynasty. The politician's parents were Catholics and belonged to the middle class, but due to the support of wealthy relatives, they were able to give their children a privileged education in prestigious educational institutions.

Because of his father's diplomatic career, the Kerry family often changed their place of residence first in Europe, then in America. So in his school years, young John was forced to change seven schools, which did not have a negative impact on his academic performance. At St. Paul's school, which was the home of the future politician from 1957 to 1962, he was one of the most talented and gifted students with a held-back and serious character. It was during this period that the boy showed the first signs of interest in politics. It prompted Kerry to organize a school political club. During the meetings, members of the club discussed "current" social problems in the conditions of the prolonged Cold War, the consequences of which complicated people's lives.

Having shown his remarkable talent in public speaking, the future United States Secretary of State was elected a member of the editorial staff of the student newspaper Pelican. It played a huge hand in building his ambitions in the political direction.

After graduating from school, John Kerry entered Yale University, where he joined the Yale Political Union. A year later, he became the Chairman of the Union, which allowed him to get a job during the election campaign of the future American President John F. Kennedy.

In 1966, Kerry volunteered for the US air force – he served in Vietnam and was the commander of the "speedboat," equipped with heavy weapons. Even in those years, he had a clear anti-war position. But he still boldly and professionally carried out their combat missions, for which he was awarded three medals of The Purple Heart, and received a Bronze and Silver stars. After a recorded third injury during the military operation, Kerry was honorably demobilized to participate in the congressional election campaign.

John Kerry's political biography dates back to 1971. Then he became famous all over America for his persuasive anti-war speeches about the Vietnam war. In his opinion, the war was dominated by the criminal nature of military actions taken by American troops. But it didn't help the aspiring politician to secure a place in the Congress. That is why he decided to master the law and to prove himself in the legal field.

He graduated from Boston Law School and then got a job in a Massachusetts law firm. Having shown his professionalism as a Prosecutor, John Kerry in 1977 received the position of First Assistant District Attorney and then established a private law firm. Despite his successful work in the field of law, the future US Secretary of State continued to be interested in politics, which prompted him to participate in the elections for Deputy Governor in 1982, in which he won a landslide victory.

John Kerry's finest hour in politics came in 1984 when he was elected Senator of Massachusetts, the post he held for almost 30 years. Senator Kerry's achievements are highly appreciated both in society and among colleagues. He is the author and initiator of several dozens of essential acts of the Congress, which are devoted to the problems of health, education, small business, terrorism, military direction. Also, thanks to the perseverance of this Senator, Washington has restored economic relations with Vietnam.

Kerry's political views on US domestic policy have always been liberal. He has consistently opposed the privatization of the social security and death penalty program, promoted the right of sexual minorities to enter into civil marriages, supported legislative control over arms and trade relations, and actively participated in international discussions about taking action in the fight against global warming.

The American Secretary of State became widely known in his post because of his tough anti-Russian position which he began to express in the wake of the conflict in Ukraine. He diligently supports the new Ukrainian government, which by a bloody coup found itself at the helm of the country, considering Russia "aggressor," which infringed upon the territorial integrity of Ukraine. The diplomat believes that it is the Russian military officers who run rampant in the Ukrainian South-East, calling their activities a carefully planned operation of the Russian special services. Kerry fully justifies the actions of the Ukrainian army in Donbass, as a result of which several thousand civilians were killed. That is why he supports the allocation of American military assistance to Kiev.

The head of American foreign policy supports the sanctions imposed by the US and 28 EU countries against Russia. However, according to him, they did not bring the expected result, but only worsened the economic situation in Europe. At the same time, he continues to insist on Russia's fulfillment of its obligations to implement The Package of Measures for the Implementation of the Minsk Agreements (Minsk II), which can become the only way to stop the war in Donbass.

Despite this, John Kerry considers Moscow a crucial political ally in a wide range of global problems. Therefore, he believes that the United States must undoubtedly bring back relations with Russia to a high level.

The US Secretary of State was married twice. His first choice was Julia Thorne, who after 14 years of marriage could not stand living with a politician and filed for divorce, because she fell into a severe depression out of loneliness. Julia gave birth to their two daughters, Alexandra and Vanessa, who to this day continue to support their father's activities actively.

John Kerry's second wife was Teresa Heinz, the widow of the founder of a major food brand Heinz. They married in 1995 and for more than 20 years have been leading a happy family life. An important place in it is occupied by their five children from their first marriages (two daughters of John and three sons of Teresa).

In his spare time, US Secretary of State John Kerry enjoys extreme sports – surfing, windsurfing, and is known as an avid hunter and cyclist. Besides, he loves to play bass and is a fan of rock bands the Beatles and The Rolling Stones.

John Forbes Kerry has a net worth of $103 million. According to estimates of the general financial position of the former US Secretary of State, John Kerry's personal property totals almost $2 million. He also owns four big businesses inherited from the Forbes dynasty. At the same time, his wife inherited more than $3 billion from her first husband, which she owns separately from John Kerry. It was taken into account in their marriage contract.