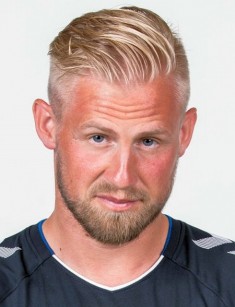 The goalkeeper of the Denmark national team has always been haunted by the words: “He’s the son of that player.” Since his childhood, the sportsman has been trying to emerge from the shadows of his father’s fame. It is interesting that Kasper is not even the fan of Peter Schmeichel’s style: the goalkeeper admires Eric Cantona’s and Manuel Neuer’s playing.

Kasper jokes that he will have to protect the gate for about 40 years so that fans will begin to see him as a separate player.

Kasper Peter Schmeichel comes from Copenhagen. The boy was born in November 1986. At four, the family moved to England where his father played. At seven, the boy started playing soccer, but he was interested in the game as an amateur.

Even when Schmeichel went to the sports college, he appeared on the soccer field only to play for his faculty. Initially, Kasper was a forward. He became a goalkeeper by accident: he stepped in for his father during the match celebrating the 10-year anniversary of Denmark’s victory in the UEFA European Championship. Peter wanted to play on the field, but there was no other goalkeeper in the team. Thus, Kasper who had been among the viewers performed this function.

As soon as the coach of Brøndby Lars Olsen saw Schmeichel Jr. playing, he was fascinated and immediately offered the young man to practice. Peter supported Kasper’s decision to accept the offer from Manchester City academy.

Kasper’s sports career was somehow similar to that of his father’s: he also changed several clubs. While coaches and owners of Manchester City were replacing each other, the Danish player was loaned by second- and third-division clubs.

Throughout his career, Kasper used to play for the Scottish Falkirk and Darlington, Welsh Cardiff City and Coventry; he also saved Bury from leaving the second league. However, there was very little practice: only eight matches during seven seasons in Manchester City. As Kasper believed, one could not learn something sitting on a bench, and four hundred games for outside clubs were just the manifestation of his desire to practice.

Schmeichel said that his passion for the game would change for hatred sometimes. The star father thought that Manchester City was destroying his son’s career; he added he would agree to play in any division on condition he would be allowed to appear on the field. Thus, Kasper gladly accepted Sven-Göran Eriksson’s invitation to Notts County.

In the oldest club, the goalkeeper signed the four-year agreement; his salary would be € 1,4 million annually. Still, there was no room for action: the new owner of the club could not allow paying that money to Schmeichel, and the contract was terminated. Kasper received the DVD with the best matches of the team.

Later, Schmeichel played a season in Leeds whose administration informed the player he was not wanted there. In 2011, the player transferred to Leicester City, the then member of EFL Championship. Based on the results of the first season, Schmeichel became the best player in the team.

In 2014, Leicester came back to the Premier League, and the new goalkeeper contributed to this achievement. Two years later, the team caused the sensation: it won the first victory in the English Premier League in its history.

In the final game, the goalkeeper remembered his forward’s experience, crossed the opponent’s penalty line, and scored with his head. After that, critics and media started saying that Kasper managed to get rid of his father’s pressing authority and showed his talent independently.

After the triumph game, the goalkeeper admitted he had learned the lesson of the sports fate. It was important for the sportsman that he had his father’s example. Besides, Paul Scholes, David Beckham, and Eric Cantona inspired the sportsman.

Schmeichel noticed that Leicester’s victory was close: the team created the special atmosphere where members were close and put the family at the center; it was rare for soccer.”

Given that the club’s administration was looking for real people, not players, who would trust each other, it was impossible to fail. However, the star family members were still compared. For instance, experts believe that Schmeichel Jr. has smaller sizes (his height is 189 cm., and his weight is 89 kg.) than his father, but he is bouncier and moves at the gate line faster than Peter.

While Peter’s trademark was the right choice of the position and he could catch a ball by stretching his arms and legs, Kasper relied on saves. Eventually, save jumps led the goalkeeper to the arm trauma during the Champions League game against Copenhagen.

The penalty series at the FIFA World Cup 2018 demonstrated that Kasper Schmeichel’s reaction was splendid. In the 1/8 game, Denmark and Croatia could not defeat each other in the playing and extra time. As the after-match penalty series followed, Kasper almost always predicted where his opponent was going to hit. In comparison, when Peter played, it was also difficult for his opponent to score a goal point blank.

Besides, Peter was notable for his unique charisma and ability to control his teammates. Kasper will have to gain this. However, experts admit Kasper’s feet move excellently.

Schmeichel Jr. did not become the main goalkeeper of his national team at once; he had to miss Euro-2016, and he also did everything to take part in the FIFA World Cup-2018 personally. Denmark made it through the group matches and won Ireland. Before going to Moscow, the team’s best result was the quarterfinal and eighth place in 1998 when Peter Schmeichel was the goalkeeper.

Kasper has been married to Stine Gyldenbrand. The young woman did not stop working: she is a midwife. There are two children in the family: the son Max and the daughter Isabella.

Together with his wife, Schmeichel founded a charity fund for women in Africa in 2012.

In 2017, the goalkeeper joined Juan Mata’s project “Common Goal”; he donates 1% of his earnings to children’s soccer development. On his Instagram and Twitter pages, the goalkeeper encourages people to give money to charity.

The Denmark national team’s leader respects his teammate Christian Eriksen and considers him to be a genius and best player he has ever dealt with. He believes his national team stands out for its pragmatic playing style and adaptability.

At some moment, Kasper Schmeichel has surpassed his father. In 2017, he became the first Champions League goalkeeper who successfully saved penalties in two games with one and the same team, Sevilla.

Besides, Kasper broke Peter’s record for the longest shutout series in the national team matches: 571 minutes against his father’s 470.

Whoscored.com named the Danish player the best goalkeeper of the English Premier League 2018. Manchester United fans expect Kasper to follow in the footsteps of his father and protect his team’s gate in the Old Trafford Stadium. Real Madrid has shown the interest in the player.

In the World Cup 2018 last game, Kasper Schmeichel was named the best player of the match. During the extra time, he saved the Croatian midfielder Luka Modrić’s penalty and also did two saves in the after-match penalty series. 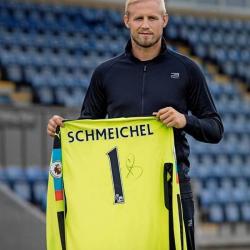