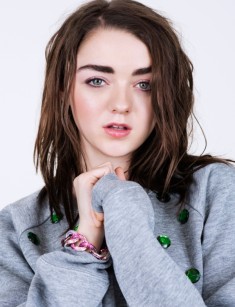 She started her acting career at the age of 13 and came a long way with her heroine, growing up and changing on the screen. Maisie Williams is an actress who has been delighting fans of Game of Thrones for seven seasons.

Maisie was born on April 15, 1997, in England. She lived in Bristol for the first years of her life. She is the youngest of four children in their family. The girl's mother worked at the university.

Maisie was very young when her parents divorced. The mother soon remarried and moved to Somerset County, where the stepfather of the future actress lived. The girl graduated from primary school there, then went to Norton Hill School and College. In college, she studied dance and Performing Arts.

She took a great interest in Performing Arts from childhood and was so obsessed with dancing that she persuaded her mother to send her to the profession-oriented school of Norton Hill. Teachers of the school were sure that Margaret Williams would become a great dancer because she had a talent. By the way, Margaret is the real name of the actress, and Maisie is a nickname which she took from favorite comics.

Studying at the dance school was her "golden ticket" to cinematography. She participated in a Talent Competition held in Paris. Producers noticed her there, and the teenage girl soon had her own agent. She began attending auditions actively.

The first test for Maisie Williams was the casting for the second season of Nanny McPhee. The girl successfully auditioned and reached the final. No one expected such good results from the participant without a theatre education, but in the finals, she lost to Lil Woods.

The beginning actress did not lose her confidence after the failure, on the contrary, it was a stimulus to come to the casting for Game of Thrones. Maisie auditioned for the role of Arya. Arya Stark is one of five children of a noble family. Richard Madden, Isaac Hempstead Wright, Sophie Turner and Art Parkinson played the heroine’s brothers and sisters. Kit Harington performed the role of the half-brother bastard.

The actress had to go through five stages. The girl was so persuasive and impressed the producers so much that they approved her at the very beginning. Arya Stark turned out to be lively and convincing. She mesmerized millions of viewers. Maisie Williams won several prestigious awards for this role.

Popularity did not spoil the girl's temper and did not affect her ability to work. The actress did her best on the set, lived the life of her character and grew up with her, improving her acting skills. Although the actress gradually began to develop quicker than her on-screen character, Maisie’s body measurements allow the actress to continue playing the role of a teenager. Maisie Williams’s height is 152 cm, but fans and the press do not precisely know her weight, different sources ranger the weight of the actress from 40 to 51 kg.

Maisie’s heroine became more and more skilled over time. At first, she played a tomboyish young girl, but the tragic events forced Arya to become an outlaw, skilled fighter, a professional killer and even a member of the ancient order. These were not the only difficulties when she portrayed Arya Stark.

According to the plot, the girl became blind, and the actress had to wear thick contact lenses. Maisie Williams admitted that it was painful to wear 22-millimeter contact lenses, but they look murky and very convincing. The actress saw practically nothing, which, however, only helped Maisie to play the blind girl.

The actress’s first heroine helped Maisie’s personal development. Arya Stark is a rebel by nature and a tomboy. Maisie turned into a tomboyish girl having played in Game of Thrones for several seasons. These character traits helped the actress to play a troubled teenager convincingly in the movies Gold and Heatstroke.

Maisie Williams also starred in the films The Secret of Crickley Hall, The Falling, Cyberbully. In 2015, the ninth season of the series Doctor Who was released, and Maisie Williams played Ashildr. Her character returned several times.

Ashildr appeared as a simple girl from the village of Vikings in the episode "The Girl Who Died" of the Twelfth Doctor. As a result of the alien intervention, the Viking girl became immortal, which allowed the writers to create the intertwined storylines of the heroine and the Doctor.

The last episode was "The Woman Who Lived," which already showed the life of Ashildr in medieval England. The main problem of the immortal Ashildr was that the girl's human memory could not remember the heroine's endless life.

Maisie Williams did not only play in these two episodes. Ashildr, who took on a new name "Me," appeared both in stories related to historical events, and in the modern world and even in the future, Maisie’s heroine also met the end of time.

The plot twist gave Ashildr and Clara (Jenna Coleman) the time machine. Thus fans can hope to watch Doctor Who spin-off, which will be devoted to the adventures of these two heroines.

The girl portrays different on-screen characters, each time proving to herself and the audience that she is not an actress who always plays one role.

The personal life of the young actress is the series Game of Thrones, where she spends most of the time. She graduated from high school as external students due to a busy schedule.

One day, Maisie Williams mentioned that she had a friend. But she did not think about serious relationships yet. Even when hackers cracked Maisie Williams’s accounts in 2016, they could not shed light on the personal life of the actress. Hackers posted photos where Maisie with two girls swam in the lake wearing only swimming trunks. The actress did not comment on these photos.

The actress spends her rare free time sewing and thinking about the career of a fashion designer in the future. Besides, Maisie Williams, like most of her peers, posts photos on Instagram and promotes her account there. Nowadays, the actress has seven and a half million subscribers.

The young actress is also concerned with environmental issues. In December 2016, the actress became a participant of the protest against dolphins hunting and animals shows. As an activist of the Dolphin Project, Maisie Williams came to the island of Taiji in Japan, where a dolphin hunting took place and called to leave the animals in their natural habitat.

Nowadays Maisie Williams is filming for a new popular franchise. The young actress will play in the fantastic horror film The New Mutants. The action takes place in the universe of the X-Men films. The movie The New Mutants will be the eleventh film of the series in this universe. The film will premiere on April 12, 2018.

The actress’s heroine with the group of children with superpowers is held in a secret facility against their will. Maisie Williams will play the role of Rahne Sinclair who is a mutant also named Wolfsbane. Anya Taylor-Joy, Charlie Heaton, and Alice Braga will perform other title characters. This film introduces five new mutant characters to the movie franchise.

The Russian-language trailer of the new film was released in October 2017 on YouTube channel 20th Century Fox Russia. 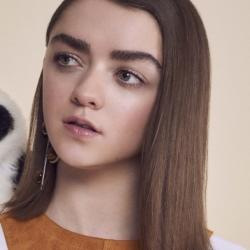