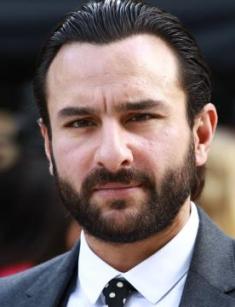 India is a country with centuries-old culture and traditions that differ from European ones. Even the cinema is unique here, not like movies from other countries. The Indian film industry has a huge number of videos that are shot in the studios of Bollywood, Odisha, Tollywood, Rajasthan, and Punjab.

There is a production company in every state producing Indian films. Saif Ali Khan is a famous actor who starred in the Bollywood epics. The actor’s filmography has dozens of projects that have caught the fancy of compatriots and foreign viewers.

Saif Ali Khan was born in the Indian capital of New Delhi on August 16, 1970, under the Leo zodiac sign. The young man is an Indian who professes Islam. The actor had a happy childhood because he was born in the famous family. The boy’s mother is a popular Indian actress, Sharmila Tagore, and his father is cricket champion Mansoor Ali Khan Pataudi. The actor’s grandfather was a famous athlete.

Mother Sharmila Tagore is from Bengal. From an early age, she prayed to Hindu gods a lot. When she got married, the woman converted to Islam and changed her birth name. Saif was the second child in the family; he has an elder sister, Saba. A few years later, his sister Soha was born, who became an actress.

Saba is a famous fashion designer in India. It is noteworthy that the actor’s father is a descendant of the kings of Bhopal (the capital city of Madhya Pradesh). The family has a castle, which is located in this city, and Saif Ali Khan remains a national hero for the residents of Bhopal.

Since childhood, the parents made efforts to ensure that the child got everything he needed. Saif graduated from three schools in the UK. At first, Khan attended The Lawrence School, Sanawar. Then the young man studied at Lockers Park School. The next educational institution was Winchester College, which his father also graduated.

In his youth, Saif Ali Khan was fond of music and dreamed of becoming a rock star. The man still likes to play the guitar. But after graduation, Saif chose an acting path.

The man began an acting career in 1992 after shooting in the movie Parampara. The debut role did not cause much enthusiasm; viewers were not fussed about him. But Saif Ali Khan did not lose heart. Soon, the actor starred in two more projects: Pehchaan and Aashiqawara.

In 1993, the actor appeared in the melodrama Aashik Aawara. For playing in this movie, Khan received the Filmfare Award for Best Male Debut.

The actor had a new chapter in his career after the release of the 1994 movie Yeh Dillagi. In this movie, Saif Ali Khan managed to reveal his talent. Viewers liked his hero, Vikram "Vicky" Saigal, and appreciated the actor’s performance. Critics also liked the project and recognized that he had a talent, which would help Saif Khan achieve a lot. The actor’s partners on the set were Kajol and Akshay Kumar.

The success of this movie attracted the attention to the young actor who was showered with offers from directors. It allowed Saif Ali Khan to sign contracts for shooting in several movies. But for a long time, he could not repeat the success of the bright film. In 1994, the young man worked on several roles. Saif had career ups and downs, and he also faced slack periods.

The actor worked with Akshay Kumar in 1996. The stars appeared together in the action movie Tu Chor Main Sipahi.

In 2000, there were more than 20 projects in Khan’s filmography.

At the beginning of the new millennium, the actor experienced fantastic success. In 2001, he reached a peak of popularity, starring in Farhan Akhtar’s drama Dil Chahta Hai. The movie became a hit and brought deafening fame to those who worked on it. Thanks to this project, Saif became one of the best actors in Bollywood.

After the release of the movie, directors began to offer Saif Ali Khan only the most successful projects. In some movies, he acted as a producer, e.g., the melodrama Cocktail. The film was recognized as a smash hit, which showed the skills of Saif and his partner Deepika Padukone. Many people consider this movie to be the best role in the filmography of the actor.

The songs and music videos from movies, featuring Saif, have become popular.

The man played an interesting role in the film Race. In the story, Saif’s hero, Ranvir, sacrifices his love for the sake of his younger brother Rajiv. In 2013, the story was continued.

Then Khan appeared in the action movie Bullett Raja, in which the artist played the leading role.

Saif portrayed the title character in the comedy Humshakals.

The film centers on young Ashok Singhania. He is a rich man, the owner of companies that bring substantial income. Ashok also has the best friend, Kumar. One day Singhania falls into a coma. At the same time, his wicked uncle, Kunwar, wants to get rid of his nephew and take over all his property. However, the villain did not take into account that Ashok and his friend have doubles.

Saif’s colleagues on the set were Riteish Deshmukh, Ram Kapoor, Bipasha Basu, and others.

In the comedy Happy Ending, Saif appeared as a long-term bachelor, Yudi, and a serious relationship was the most terrible thing for him. However, the young man has a girlfriend, Vishakha, who is trying to marry him. To get rid of the annoying beautiful lady, he takes on the first job that comes along and must write the script. But in this field, Yudi has a charming rival, Aanchal, dishonestly stealing the man’s clients. Then he tries to make friends with the woman to call the bluff of the swindler.

Ileana D'Cruz, Kalki Koechlin, Ranvir Shorey, and others starred together with Saif in the movie.

In 2015, Saif Ali Khan played the leading role in the action movie Phantom.

The plot of the film told about the brave Indian soldiers who operated undercover on the territory of Pakistan to destroy one of the most dangerous terrorist organizations, Lashkar-e-Taiba (Army of the Good).

The artist’s colleagues on the set were Katrina Kaif, Sabyasachi Chakrabarty, Rajesh Tailang, and others.

Divorces are practically unacceptable in India. The negative attitude concerns mainly the middle class, and people continue to live together even when it becomes impossible. The personal life of celebrities lacks such conventions. For example, Saif Ali Khan has been married twice.

Saif celebrated the first wedding with the popular Bollywood actress, Amrita Singh, in 1991. The woman was 12 years older than her husband. The marriage, in which two children were born (daughter Sara and son Ibrahim), broke up in 2004.

Saif’s second wife is also an actress, Kareena Kapoor. The couple got married on October 16, 2012. Four years later, they had a son, Taimur Ali Khan.

The actor was credited with a love affair with Priyanka Chopra. However, it is a doubtful story, since reporters have often written about the young actress’s relationship with other actors. Saif speaks highly of his wife, Kareena. He says that the woman has a positive influence on him, that the spouses understand each other and live happily together. Numerous photos of this beautiful couple speak volumes about it.

In 2007, the actor was hospitalized after a rehearsal because Saif complained of chest pain. The man stayed at the hospital overnight. After that, Saif Ali Khan quit smoking.

There is a page titled Saif Ali Khan on Instagram, but it is unknown whether this is the actor’s real account or a fan page.

In October, the actor appeared as chef Roshan Kalra in the comedy Chef.

In the story, the man strives to surprise visitors of the restaurant where he works. As a result, Roshan loses interest in cooking and zest for life. Later, Kalra quits from the expensive venue in New York City and returns to India to his wife and son. There, the man creates a drive-in-restaurant and goes on a trip around his native country together with his son.

The movie is the official remake of an American film of the same name, but it became a box office flop. Besides Saif, Padmapriya, Dhanish Karthik, Ram Gopal Bajaj, and others starred in the project.

In January 2018, the thriller Kaalakaandi premiered.

Saif appeared as a businessman who did not drink alcohol, did not smoke, and led a healthy lifestyle for all his life. But suddenly he found out that he was mortally ill. Then the rich man decided to enjoy all the temptations of his native city in a short period of time. The film received negative reviews from film critics and was a box office bomb.

In July, the Netflix TV series Sacred Games is planned to be released. One of the leading roles went to Ali Khan. It is the first TV show in the actor’s career.

Nowadays, the actor plays in two projects: the crime movie Vishal Bhardwaj Untitled and the drama Mohit Suri's Next, but their release dates are unknown.