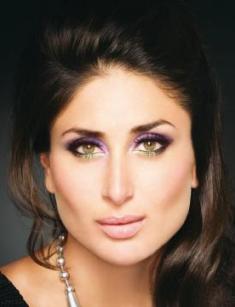 Kareena Kapoor is a Bollywood star, singer, and dancer; she represents the fourth generation of the famous cinematographic family in India – the Kapoors. The legendary blue-eyed king of Indian movies Raj Kapoor was her grandfather.

The would-be artist was born on September 21, 1980, in Mumbai. The girl was destined to become an actress – however, she had to break the old tradition, for only men could be actors in the previous generations. Even those actresses who married one of the Kapoors had to quit their successful careers.

This is what happened to the girl’s mother, Babita Shivdasani, who had participated in 19 projects before she married Kareena’s father, Randhir Kapoor, in the mid-1970s. Proud Babita left cinematography and devoted her life to two daughters but decided to fulfill her dream in the kids. In 1988, she divorced Randhir and moved to Lokhandwala with them. It was outrageous – she violated the social orders and the rules of the powerful Kapoor family.

Randhir did not believe his daughters could become actresses, and only the parents’ break-up made it possible. Kareena and her sister Karisma flouted the unspoken taboo and became the first female artists in the dynasty. The mother encouraged Kareena’s talents; she always accompanied her at a movie set and, actually, worked as her producer. The family made amends 19 years later, in 2007.

Kareena did not choose the acting career at once. She graduated from a boarding school in Dehradun and then studied economics at Mithibai College for two years. Further on, the young woman tried herself in the legal sphere and transferred to a school of law. The next year, she realized that academic activities were not her cup of tea and decided to enter a drama school, making her old dream come true.

Kareena debuted on the screen when she was 20; it was the movie Refugee that brought her the Filmfare Award for Best Female Debut. 2001 was marked with the first popularity thanks to Mujhe Kucch Kehna Hai.

The same year, the woman strengthened her positions: the historical drama Aśoka was shown at the Venice Film Festival. She also collaborated with Hrithik Roshan in the top-grossing melodrama Kabhi Khushi Kabhie Gham...

2002-2003 were not lucky for Kapoor: her projects did not earn recognition among critics and ordinary viewers. For example, the lead part in Jeena Sirf Merre Liye was a failure. Under those circumstances, Kareena revised her genres and began to play deep, dramatic characters. The melodrama Chameli was the turning point: the actress personified a prostitute Chameli, and movie experts finally appreciated her universal talent.

In 2004, the woman debuted in the thriller genre (Fida); two years later, she participated in the drama Omkara based on Shakespeare’s play. The premiere took place in Cannes.

In 2009, fans enjoyed their favorite’s acting in the comedy Kambakkht Ishq with the highest-paid Bollywood actor Akshay Kumar. It is the first Indian movie filmed in Hollywood. Another 2009 project, 3 Idiots, was the highest-grossing Bollywood movie ever; it remained popular for four years and brought $36 and $20 million in Indian and world releases correspondingly.

In 2011, Kareena co-starred with Shah Rukh Khan in the fantastic movie Ra.One. The same year, she appeared as Divya in the action Bodyguard. As the story runs, a bodyguard is assigned to this character, but the stubborn beauty is not going to accept that. She creates the plan to get rid of the man who interferes with her free lifestyle. Salman Khan, Raj Babbar, and Asrani participated in the project as well.

The movie Talaash: The Answer Lies Within brought another role of a prostitute, Rosie, who helped Inspector Shekhawat in his investigation.

When the actress Aishwarya Rai quit the movie Heroine because of her pregnancy, Kareena replaced her. The drama Satyagraha brought collaboration with Amitabh Bachchan and pictured political issues relevant to many countries. Salman Khan and Kareena Kapoor met again at the movie set of Bajrangi Bhaijaan (2015). Rasika falls in love with Khan’s character and takes care of the mute girl Munni he had found. It was the top-grossing movie in Bollywood in 2015.

In April 2016, fans welcomed the romcom Ki & Ka about young spouses, Kabir and Kia. The future lovers meet on board a plane. As they are talking to each other, it turns out that the man likes to be a home keeper rather than build a successful career; in her turn, Kia dreams of becoming a businesswoman. The main characters feel attracted to each other and fall in love; they marry and agree that Ka will be responsible for household chores while Ki will provide the family with money.

Thanks to this deal, the lovers’ life is peaceful and harmonious, but the media learn about it one day. Kabir becomes a social activist and gives many interviews on gender equality; as a result, he has less time on housekeeping.

Since 2000, Kareena Kapoor has given many concerts and performed her own songs all over the world; millions of fans love her music videos and dances. The artist has won six Filmfare Awards and received a nickname “a style icon”. Besides, People named her India’s Most Beautiful Woman in 2010.

Kareena’s love story is just as unusual as her road to career success. In 2007, she met the Indian actor Saif Ali Khan at the movie set of Tashan. Some episodes were filmed in the ruins of an ancient Indian city, in the middle of a desert.

There were no bright romantic scenes on the screen – the real chemistry happened outside it. The actors did not conceal their feelings, although Kareena was dating the actor Shahid Kapoor, and Khan was married and had two children.

This romance shocked traditionally-minded India: the man left his wife for Kapoor. The couple lived together for five years and only then married officially; the home wedding ceremony was unpretentious and took place on October 16, 2012. The spouses’ son was born in 2016. Today, Saif and Kareena are one of the most beautiful and talented couples in the country.

Kareena was named after Anna Karenina, the main character of Leo Tolstoy’s book – the girl’s mother loved to read it when she was pregnant. Close people call the artist Bebo; this nickname appeared in the name of the first clothing line created by Kapoor. She is the first Indian actress to launch her own clothing brand.

When the actress received the Filmfare Awards for Omkara, she expressed her gratitude to her mother and emphasized the woman had to bring up her daughters alone; she did not say a word about her father. Kareena’s favorite actors are her famous grandfather Raj Kapoor and Nargis; her favorite movies are Awaara and Sangam, where they starred.

In 2010, Kapoor sponsored the electrification of an Indian village.

Fans can learn the latest news about the artist on fan pages on Instagram and Twitter – Kareena has no official accounts.

The Indian celebrity met her colleague, the actress Priyanka Chopra, at the movie set of Aitraaz. The women made friends at first but split up later because of work-related competition. Today, the stars make sarcastic comments about each other in interviews.

It is a story about four close friends. When parents are going to give one of them in marriage, the rest of them organize a grandiose bridal shower.

Untitled Raj Mehta Project brought the actress the lead part; the premiere is expected at the end of 2019. The woman will also appear in the drama Bombay Samurai, but the details are unknown.