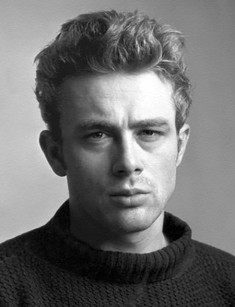 The legendary actor, the Hollywood star who left this world at the peak of his popularity and in the prime of life. His early death turned the 24-year-old actor into the cult figure, shrouded in mystery, gossips, and myths. James Dean is the first actor who was nominated for Academic Awards posthumously and received the Golden Globe Awards. He had his star left on the Hollywood Walk of Fame, and Dean forever received the 18th position in the list of 100 Greatest Actors by the version of the American Film Institute in the late nineties.

The future actor was born in the hotel room in Marion which is in Indiana. James Byron Dean's ancestors were Scots, Germans, Irish and Welshmen. The father of the star is Winton Dean earned his living by the farming. When his son turned six years old, the head of the family left his agricultural work and got a job as a dentist in the Californian town of Santa Monica.

The boy had the very warm and confidential relations with his mother, but Mildred had died of the oncology when her son was nine. His father sent James on the upbringing and education to their relatives who were farmers and lived in Fairmount. There the guy joined the traditions of the Protestants and Quakers.

The priest James DeWeerd had the most significant influence on the teenager. Later the biographers put forward a case that warm relations of Dean and DeWeerd had an intimate nature. Due to the priest, the teenager learned about the races, acting, and bullfight which in a short time influenced James's biography.

At school the guy didn’t distinguish from his peers a lot: he played baseball and basketball. James Dean achieved remarkable progress in the sports, but in the school theater, he didn't show great acting skills in the beginning. But acting attracted James, and he continued studying the theory, appearing on the stage of the school theater and improving his skills.

After the guy had graduated from the school in 1949, he returned to his father in California. At that period Dean Sr. already had a new family. At the insistence of the parent, the young man entered the law college where he began to study Law. But learning of the laws turned out to be too dull for James, and acting was calling and tempting him.

James Dean left college and went to California. At the university, the guy continued to study the art of performing, what caused the anger of his father.

At the university, the beginning actor appeared on the stage and was noticed by James Whitmore, who was the director of the theater and actor. Dean joined the theatrical troupe and was entrusted with a significant role in the play Macbeth. The young actor managed to leave 3,000 candidates behind to receive the part of Malcolm.

The work on the stage turned out to be so fascinating for the young man that he left the university and in 1951 began his acting career.

At first, James Dean appeared on the TV screens in Pepsi Cola commercials. He was noticed and was given a bit role in the Easter show. From 1951 till 1953 the actor was engaged in the small roles and episodes of four pictures where he performed the parts of the duelist, the recruit, and the football fan. James Dean’s name wasn’t mentioned in the titles of the movies.

In the picture of Paramount studio under the title Sailor, Beware which came out in 1952 Dean, at last, received the role with the words. The duet of the jazz singer and actor Dean Martin and the comedian Jerry Lewis appeared in this movie. James Dean was entrusted with the role of the boxing coach in one of the episodes.

In expectation of the roles, Dean worked where he could. While working as a parking attendant in CBS corporation media holding, he met the influential producer. The acquaintance with Rogers Brackett who was the head of the radio-edition in the advertising agency played an important role in the actor’s career. Brackett helped Dean with the lodging and gave him practical and useful pieces of advice on how to achieve success in a short time.

James Dean moved to New York where he received the offer to work in the game TV shows. In a short time, Dean became the student of Actors Studio which was headed by the legendary master Lee Strasberg. The actor who was willed with pride shared his happiness with his family and sent them a letter. In the letter, he wrote that he was happy to study in the studio where worked the idols of the movie industry such as Marlon Brando and Arthur Kennedy.

His studies at Strasberg opened James Dean the doors to the high-rating TV shows. The actor also appeared on the theatrical stage and acted as Bachir in the play under the title The Immoralist. With the help of the participation in the shows and appearance in the stages of the theater the actor made his way to the "factory of dreams." In Hollywood Dean managed to perform the leading roles in three pictures which turned the young actor into the cult figure of the American teenagers.

In the mid-fifties, the American director Elia Kazan decided to work on the screen adaptation of John Steinbeck's novel. Kazan was planning to invite the Hollywood star Marlon Brando for the leading role in the same-name cinematic saga East of Eden.

Though, he had to change the plans because of the interference of the author of the saga: the scriptwriter Paul Osborn presented the little-known young actor to Steinbeck, and the author was impressed. Kazan was forced to agree though he didn’t consider James Dean's candidacy suitable for this role.

In such a way Dean got his first-star role and set off for Hollywood where the shooting process began.

Dean successfully coped with the image of Cal Trask – a young rebel with prickly character: James's character had a lot in common with his hero's temper.

The same year James Dean appeared in the image of his second-star movie character Jimmy Stark in the drama directed by the famous Hollywood master Nicholas Ray under the title Rebel Without a Case. The picture about the teenage protest turned out to be in the mainstream. After the movie had come out on the screen, the image of Stark became cult for the young Americans. The stars Natalie Wood and Sal Mineo appeared on the screen together with James Dean.

James Dean received his third and last role in the epic drama Giant directed by George Stephens. In this pictures the leading characters were performed by the trio of the stars: experienced Elizabeth Taylor, Rock Hudson, and young talent James Dean. His personage differed from his previous roles: Jett Rink is an oil bigwig from Texas. To play this role of the magnate Dean made "an aged" appearance, changed his hair color and a hairstyle.

The Giant was premiered after James Dean's death. For the work in this picture, the star's name for the second time was nominated for Academic Awards.

The sudden death of James Dean aroused the splash of interest to his person a lot of rumors about the star’s personal life. Dean was told to have short love affairs with young Hollywood actresses of Warner Bros. But only one relationship was confirmed – it was a love affair with the Italian actress - Pier Angeli.

They met when Pier was shooting in the Hollywood melodrama The Silver Chalice. It is said, that the young people exchanged items of jewelry as a sign of fidelity.

The girl’s mother prevented the marriage of James and Pier as she was insisting on the choice of the Catholic spouse. In a short time, Angeli married her compatriot – the singer Vic Damone.

The star’s biographer William Bast assures that the fling of the star with the Italian beauty was a promotional deal of Warner Bros.

The rumors that James Dean was gay appeared after the situation when the American actor had avoided the army service, having referred to his non-conventional orientation. At the recruiting station, he admitted his homosexuality what was considered a mental deviation in the U.S. at that time.

The biographers and the journalists say that Dean had an affair with his patron and producer Rogers Brackett, his biographer and friend William Bast, scriptwriter Paul Osborn who had asked for the role for James at Steinbeck. But there are enough opponents of this version who consider the non-conventional orientation of the star a PR stunt of the film studio.

When the actor began to earn the decent money he bought the sports car. In the autumn of 1955, the Hollywood star in a company of the mechanic Rolf Wütherich set off in the racecar Porsche 550 for the racing event in Salinas.

The fatal collision with a black-and-white Ford with the student of the Polytechnic institution behind the wheel took place on the fork near the Californian town Cholame.

The driver of Ford received slight injuries, Wütherich was taken to the hospital with moderate bodily injuries. And James Dean's couldn’t survive with his injuries.

The actor died on the way to the hospital. Dean was buried at Park Cemetery in Fairmount. 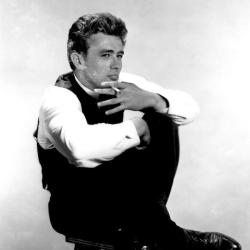