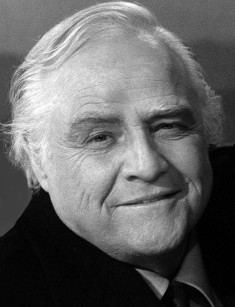 Marlon Brando is a legendary American actor and t political activist. He is considered to be one of the most significant actors in the history of cinematography. For more than 50 years of his career, he had performed in 40 movies, most of which had got into the gold reserve of the world cinema. Brando is a two-time winner of Academic Awards, an owner of two Golden Globe Awards, Emmie Awards and Cannes Film Festival Awards.

Marlon Brando was born in the town of Omaha located in Nebraska. His father, Marlon Brando Sr., was the owner of his own manufacture which was engaged in the production of forages for farm and domestic pets. His mother Dorothy Pennebaker played at the local theater and was familiar with the actor Henry Fonda. Marlon was called Bud as a child and was the youngest child in his family. He had elder sisters Jocelyn and Frances.

Brando Sr. was a rather closed and hard person. He raised his children in extreme strictness, they were prohibited almost everything, including external expression of their emotions. For example, in their family, it was allowed to embrace each other only on a birthday. There was a piano in their house, which was the only entertainment. Sometimes Dorothy played the piano and sang.

When Marlon turned 6, his family moved to the suburbs of Chicago where Bud entered the prestigious Lincoln school. Up to 11 years he had no friends, but then he got acquainted with Wally Cox who later became a popular actor, and from him, Marlon Brando had caught a dream to be the part of cinematography.

In several years Brando's parents decided to live separately for some time, and Dorothy with children moved to her mother to the Californian town of Santa Ana. At the new school, Brando Jr. began to prove himself well as an athlete and he had set up several local records on athleticism. Besides, he expressed himself as a rebel: he dressed very flashy and brightly, he had conflicts with his teachers and the director, he behaved arrogantly. In high school Marlon took an active part in school performances, playing mainly drama heroes or villains. He wasn’t successful in comedy roles. Also, a young man was a drummer in the local group.

After school, against his will and on the rigid insistence of his father, Marlon Brando became the cadet of Shattuck-St. Mary's Military Academy. There he discovered his surprising abilities to imitate other people’s voices. He played Tutankhamun in academy’s play "The message from the Hafu" and not only received standing ovations of the public, but also convinced his English and Literature professor Earl Wagner that his place was on the stage, but not at the battlefield. Wagner was so impressed by the talent of the young man that he convinced Brando's parents to allow their son to start acting career.

Marlon Brando had acted in a great number of movies for 50 years of his career. From the very beginning he was a staunch supporter of Stanislavski's system, and in his work, he followed the principles of this technique. Consequently, Marlon Brando's acting began to be considered a standard, a model to be followed not only by students of drama and cinema higher education institutions but also by the famous actors.

His first picture "The Men" brought an aspiring actor enthusiastic feedback from critics and the Finnish Jussi Movie Award for the Best Foreign Actor. But the true success had come to the actor in a year when the screen version of the classical play of Tennessee Williams "A Streetcar Named Desire" came on the screen. In this movie, Vivien Lee became a partner of Marlon Brando. The movie became classics of the cinematography and constantly enters lists of the best pictures of the world. Thanks to this picture Marlon Brando became extremely famous and for Vivien Lee, on the contrary, the movie was tragic and she became manic depressive.

Brando was nominated for Academic Awards for his role in the movie "A Streetcar Named Desire" but he didn't get the statuette. But in 1954 he, at last, he became the owner of Academic Awards for Best Actor for his role of the former boxer Terry Malloy in the picture "On the Waterfront". There were several interesting incidents connected with this movie. Frank Sinatra who was personally invited by the director of this picture had to play the leading role. There was even a contract signed with him, but the producer Sam Spiegel wanted to see in this role only Marlon Brando. He had persuaded the actor who had been gaining popularity at that time, to take part in the movie. Despite judicial proceedings with Frank Sinatra who demanded a penalty for cancellation of the contract, Marlon Brando was approved for the leading role.

One more curious fact is that a picture "On the Waterfront" in the year of release was met by the public with restraint regardless the awards it had received. And at present time the film shot for 36 days only is included into 100 Best Movies of the 20###sup/sup### century.

The year 1972 was remarkable in the acting career of Marlon Brando. At that time he performed in two movies – the gangster drama "The Godfather" and in the erotic melodrama "The Last Tango in Paris". It’s interesting that the Paramount film company which was filming "The Godfather" demanded that Marlon Brando didn't take part in this picture as the producers had heard a lot about his arrogant behavior on the movie sets. But none of the actors who had auditioned for this role couldn't show that level of acting which was presented by Marlon. As a result, he was considered for the role of mafia clan boss - Don Vito Corleone. During shootings, Brando had been using a boxing capa to give his jaws a more aggressive form and look.

In the movie "The Last Tango in Paris" the famous actor was improvising all the time. The majority of his remarks in the final version of the melodrama were absent in the initial script. Despite great creative contribution, Brando, as well as his partner Maria Schneider, was not satisfied with his work in this movie and during 15 years after the shootings, he refused to communicate with the director Bernardo Bertolucci.

However, the actor was again nominated for Academic Awards for his roles in both pictures, but he won an award for "The Godfather". Unexpectedly for all he refused to get an award and instead of himself, he sent the girl Sashin of Indian origin from the Apache to the stage and she also didn’t accept the award. In such a way Marlon Brando attracted public attention to discrimination of indigenous people of America.

Marlon Brando was known as the conqueror of female hearts. He had a great number of flings with the stars, including close relations with the movie star Marilyn Monroe.

The actor was married officially three times. In 1957 Marlon got married to the Indian actress Anna Kashfi who gave birth to his son Christian Devi. In 1959 spouses divorced, and in a year Brando got married for the second time with the Mexican actress Movita Castaneda who was 7 years older than him. They were together for 2 years and Movita gave birth to their son Miko Kastaneda, and in 1966, already out of marriage, their daughter Rebecca was born.

Right after the second divorce, Brando married the 20-year-old Tahiti actress Tarita Teriipaia who was 18 years younger than him. She gave birth to two children – a son Simon Teihotu and a daughter Tarita Cheyenne. Also, the actor adopted his wife's daughter Maimiti. This marriage was the longest of all. They got divorced only after 10 years of marriage.

Moreover, Marlon Brando wasn’t married but had serious relations with his housekeeper Maria Cristina Ruiz who gave birth to the three of his children: Ninna Priscilla, Myles Johnathan, and Timothy Gahan. Besides, the actor had several other children out of marriage. Officially he recognized 14 children, apart from adopting.

In the nineties, Marlon Brando had put on weight because of the type II diabetes and his weight was about 135 kg. Besides, he began to suffer from memory loss and had vision problems. Later he was diagnosed with liver cancer.

His son Miko worked as the security guard for Michael Jackson who was friendly with Brando and often brought his father on the Neverland ranch where the actor could be in the open air for a long time as the actor began to suffer from anoxia.

One week before the death the actor got an invitation from the Tunisian director Reed Beki to work over the script of the new project "Brando and Brando". But on July 1, 2004, Marlon Brando was taken to The Ronald Reagan UCLA Medical Center in Los Angeles with the diagnosis - pulmonary fibrosis. Marlon Brando refused to have the tubes inserted into his lungs what was the only way to prolong his life, and he died on the same day.

Marlon Brando was cremated, and his ashes together with the ashes of his childhood friend Wally Cox whose mourning ballot box the actor had been storing at home since 1973 were scattered over Tahiti island and over Death Valley in California. 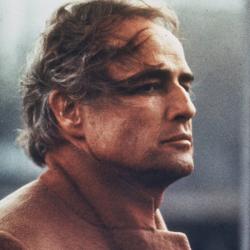