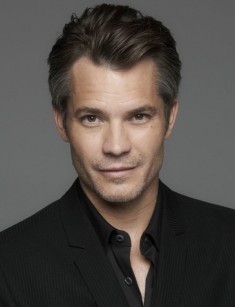 Timothy David Olyphant was born in paradisiacal Hawaii. But he lived for a few years on the islands. The family moved from Honolulu to California in search of a good job. There is no information about the mother of the future Hollywood star, but Timothy often mentions in his interviews the father and brother Andy. His father studied to become a teacher, but he worked at a winery all his life. Now the actor's brother is in A&R for Warner Bros. Records.

Timothy Olyphant spent his youth in the town of Modesto. The guy was fond of swimming, the future actor spent the whole day in the pool and achieved considerable success. The young athlete even won medals at local and national competitions, but one event changed his life, and he put the sports on a back-burner. Timothy fell in love and enrolled in the drama courses, where his girlfriend studied. He was fascinated with the theatre so much that the guy forgot about the pool and even the girl.

After graduation, Timothy Olyphant went to New York, the city of unlimited opportunities. There the future star improved acting skills at William Esper Studio. Soon Olyphant's efforts were crowned with the first success. Olyphant received the Theatre World Award for the outstanding acting in the production Monogamist. Timothy felt great performing on stage. But at some point, he realized that the real glory awaited him not on the stage but the set. So, he went to Los Angeles to conquer Hollywood.

He did not immediately climb the famous Hills because the work in theatre was different from filming. Therefore, in the beginning, the bright and talented man got only bit parts, but the young actor was happy and did his best in front of the camera.

In 1995, Timothy Olyphant received a role in the television film 77 Sunset Strip, and in 1996, in the TV series Mr. & Mrs. Smith. Later, he played some bit parts in TV series and movies.

Finally, the beginning actor got the significant role in the film Go. The project was released in 1999, and it became high-rated. So, it was the start of Timothy Olyphant’s acting career in Hollywood.

Olyphant won the Young Hollywood Awards for the work in Go and became a member of the Star Factory. The young actor was offered more significant roles in high budget movies.

Timothy Olyphant wanted to achieve the Hollywood heights. The actor actively appeared in serials that help him to become more recognizable. And it worked. In 2004 Olyphant got the starring role in the series Deadwood. The HBO cable channel released the series, and during the broadcast, the television series and the Deadwood crew received eight prestigious Emmy Awards for various nominations and one Golden Globe Award.

The series tells about the period of the gold rush and is based on actual events, legends, and literary works. Besides, the series emphasized realism, including a true life depiction of sex and violence scenes. They did not avoid obscene language, and it is difficult to watch some episodes. Subsequently, these same features brought recognition to other HBO projects.

Olyphant plays the role of former marshal Seth Bullock, who moves to the village of Deadwood, which developed into a town, hoping to settle down and open a shop.

Deadwood brought the actor the long-awaited fame, as well as the prestigious Screen Actors Guild Award. The series had three seasons. Although the channel did not close the show officially, it did not announce the fourth season of Deadwood.

Thus, 2007 was a turning point in Timothy Olyphant’s career. The actor played the leading roles in the world-famous movies, such as the films Live Free or Die Hard and, Hitman. Nowadays the actor is offered only title characters. He left the bit and insignificant parts in the past.

The release of every new movie hit increases the army of Timothy Olyphant’s admirers. Viewers are fond of movies with the participation of the actor such as Damages, A Perfect Getaway and I Am Number Four.

Later, other Hollywood blockbusters with the actor were released. The most striking films are The Crazies, and This Is Where I Leave You. In the first film, the actor got the leading role of the town sheriff, who suffered sudden, aggressive behavior of previously peaceful inhabitants. The soldiers take the residents to quarantine, and inside the isolated territory, some people hunt the others. The sheriff has to bring some semblance of order, and also to investigate the reasons for this sudden insanity.

During this period Timothy Olyphant also got the leading role in the crime television series Justified. The actor played the role of Marshal Raylan Givens. Although he is an officer in the modern world, Marshal behaves as if he had lived two centuries ago. He is a loner, a fan of cowboy hats and the same behavior, as well as a gunfighter. Givens’ attitude towards the rules and restrictions causes problems for criminals and direct authority.

In September 2016 a new hit movie with viewers’ beloved actor premiered in the USA and Russia. It is the political thriller Snowden, where Timothy appeared as a CIA agent.

In 2016, the actor also played a bit part in the comedy-drama Mother's Day.

Unlike many of his famous colleagues, the Hollywood star is an exemplary family man. Timothy Olyphant’s personal life consists of the beautiful wife, Alexis Knief, and three children: Grace, Vivian, and Henry. Timothy does not give grounds for gossip of journalists and cunning paparazzi. The actor has not been involved in any intrigues and scandals.

The actor also does not try to draw the attention of the press and fans to his life. The actor does not have an Instagram account, a social network where other stars often share family news and everyday life photos, and he is not very active on other social networks.

In 2017, the actor played a leading role in the comic horror series Santa Clarita Diet which aired on Netflix. The actor portrayed a real estate agent in Santa Clarita, whose wife has a physical transformation into a zombie. Now the hero's wife craves human flesh, which changes the life of the family.

The series received positive and mixed reviews. Critics mentioned an excellent cast, good humor, and a fascinating plot, but the main disadvantage was the abundance of blood that looked grimly.

Nevertheless, the second season of the series is scheduled to premiere in 2018.

In 2018, the actor will also appear in the drama Behold My Heart. 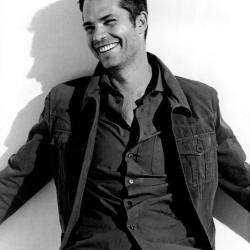