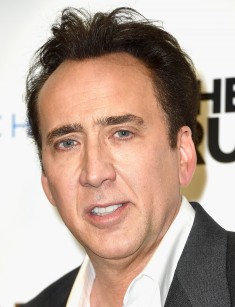 Nicolas Cage is an American actor, producer and film director. Nicolas Cage was born on January 7, 1964. His mother Joy Coppola was a dancer and his father August Coppola was a professor of literature. The native city of the future movie star was Long Beach, California. The real name of the actor is Nicolas Kim Coppola.

It happened that the closest relatives of Nicolas worked in show business. One of his elder brothers became an actor; the second chose the profession of a film director, his uncle is the world-famous Francis Ford Coppola, who produced “The Godfather”. And the grandfather of Nicolas, Carmine Coppola is a famous composer.

Nicolas Cage studied at the Beverly Hills School. Teachers of the drama class noticed the boy's talent. During his studies, Nicolas constantly participated in theatrical productions and spent his vacations on the theatrical courses in San Francisco. He did not want to associate life with this kind of art. Since childhood, Nick dreamed of becoming a movie star. At the age of 17, the young man decided to leave his studies, passed the final exams earlier, and then went to conquer Hollywood.

The actor made his debut in the movie in 1981. Then the actor appeared in the series "The Best of Times." Then there were a few more movies that did not bring Cage fame. More successful was the role in the film "Valley Girl" in 1983. At the same time, Nicolas took his pseudonym.

No matter how the actor tried to distance himself from family connections in the film industry, it was Francis Coppola who helped in his career, offering roles in the film "Rumble Fish" (1983), "The Cotton Club" (1984), "Peggy Sue Got Married" (1986).

World fame came to Cage in 1990 after starring in the film "Wild at Heart" by David Lynch. The actor did not stop starring in films but another loud success came to him 5 years later, when the actor played the main role in the film "Leaving Las Vegas", which brought him the first "Oscar".

Nicolas Cage's fees increased. In addition, the new opportunities appeared. Then there were roles in such blockbusters as "The Rock" (1996), "Con Air", "Face/Off" (1997), in the romantic drama "City of Angels" (1998). In 1999, Cage played in the films "8mm" and "Bringing Out the Dead." These films are called the best in the creative biography of the film actor. His photos appeared on the covers of the world magazines.

The popularity of the actor has grown so much that the next film "Gone in 60 Seconds", released in 2000, brought the celebrity $ 20 million. In the same year, Nicolas Cage played the roles in the films "The Family Man" and "Captain Corelli's Mandolin."

The Hollywood actor has always had large fees but Cage has repeatedly experienced financial difficulties. This is partly because of the costs of the legal proceedings with his former wives, mistakes in financial calculations, and also because of the luxurious lifestyle.

Women always paid attention to the tall and handsome man (the height of Nicolas is 183 cm). He met his first wife in 1987. After meeting Patricia Arquette in a cafe, the actor made an offer to her in an hour. The girl decided to support the joke and put before the young man three “impossible” conditions. For the wedding, Cage had to present the bride a black orchid, the signature of the writer Salinger and the female wedding dress of an Asian tribe called "lisu". The trick was that such orchids do not exist, and the mentioned writer did not write anything by hand.

Nicolas Cage was not at all embarrassed and soon gave Patricia a flower, painted with a spray gun, and a Salinger note, which he bought from one of the collectors for big money. Arquette was very surprised, canceled the third condition and decided to marry him. The couple couldn’t buy tickets to Cuba, where the wedding was planned. At the airport, the actor began to quarrel with the employees, and the bride, taking advantage of the moment, left him.

After a while, he had relations with Christina Fulton, who in 1990 gave birth to their son Weston. In 1995, Nicholas again met Patricia. And in April of the same year they got married. They had a lot of things in common and even acted together. Their marriage lasted only 6 years.

The second wife of the actor was Lisa Marie Presley. In order to meet the heiress of the king of rock and roll, Cage put on Elvis's costume. The girl was angry and she was already famous for her bad temper. Despite this, in 2002, the actor married Presley but the marriage lasted only 109 days.

The third wife of Nicolas Cage was Alice Kim, the Korean by nationality. They met on February, 14 2004. The actor went to one of the sushi bars in Los Angeles, their table was served by a nice dark-haired waitress. She married Cage soon after the acquaintance. In 2005, Alice gave birth to a son. The actor suggested the name Kal-El (in honor of the superhero of one of the comics).

In 2014, Nicolas Cage became a grandfather - his son, Weston, had a son. The children of Nicolas Cage are following his father's career.

In 2016, the press reported that Nicolas Cage left his wife because of her betrayal. Alice and Nicolas constantly argued that they live in a happy marriage. As a result, envious people left the couple alone. Nevertheless, the couple broke up in January 2016.

On the 25th of March of 2019 there appeared the information that Nicolas Cage is going to marry the 23-year old make-up artist from Hollywood called Erika Koike. The couple wanted to keep their relations in a secret, but in April of the previous year they were captured relaxing together in Puerto Rico where Nicolas was taking part in the shooting process of the movie Primal. Later, in May of the same year, they were captured by the paparazzi in Los Angeles, while they were having dinner together.

It's surprising, but on the 29th of March 2019, four days after the couple got married, Nicolas filed for the divorce. It became known, that young people had registered their marriage in Las Vegas on the 23rd of March. According to the eye witnesses, who saw Nicolas that day, he was drunk and repeated that Erika's ex-boyfriend was a drug dealer and that she would take all his money from him.According to the sources, Erika look confused and told Nicolas that she wouldn't insist on the marriage.

In 2017, the media reported that Nicolas Cage was injured during filming in Bulgaria. Journalists reported that the American film actor unsuccessfully performed a trick for the film "211". The incident happened at the Boyan cinema center in Sofia. The American was taken to the clinic of the Moscow Military Medical Academy. Doctors recommended an operation. Soon the actor was sent to the US for further treatment in Los Angeles.

In the drama "211" Cage played a positive hero, a policeman who tried to solve an armed attack on the bank. Shooting with the actor should have lasted three weeks.

It should be noted that in April 2017, the Web site appeared, in which "cage of torture" with a continuous translation of feature films with Nicolas Cage, was published. The VR-project was called The Cage Cage.

In 2016, the new films appeared with the participation of the actor: "Army of One", "USS Indianapolis: Men of Courage", "Snowden", "Dog Eat Dog" and "Trust". In 2017, the films "Arsenal" and "Vengeance: A Love Story" were released.

In 2016, the American press reported that Nicolas Cage had a fight with a rock star because of his fan. The Hollywood actor fought near a hotel in Las Vegas with the vocalist of the rock band Mötley Crüe Vince Neil.

As reporters inform, it all started when the woman asked Cage for his autograph. But the musician grabbed the fan by the hair and threw it to the floor. Seeing what had happened, Cage immediately fought the rock star. As a result, no one was hurt in the fight - the celebrities decided not to use fists.

Nicolas Cage has a net worth $25 million. 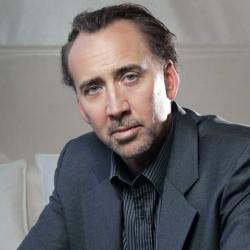