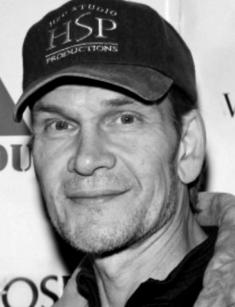 Patrick Swayze is an American actor and dancer, who became famous for his main roles in the iconic Hollywood films Dirty Dancing and Ghost. These films are on the list of the best movies to watch on Valentine's Day. Patrick was as a sex symbol of the early 90's thanks to his talent, attractive appearance and charisma.

Patrick Wayne Swayze was born in August 1952 in Texas, Houston. There was a grown daughter Vickie in his family at the time of his appearance. Later, the younger brothers Don and Sean Kyle were born. Her parents adopted Boru's younger sister.

Patrick Jesse's father Jesse Wayne Swayze worked as an engineer and his mother was a famous choreographer in the United States. She established her ballet school, where Patrick studied. Also, the boy was fond of swimming and football. He brought sports prizes and awards, while he studied well. All these circumstances did not guarantee him good relations with his peers.

Patrick Swayze was considered a mother's son and often offended. At first, the boy resorted to his mother in tears but when he grew up, the woman realized that the problem must be solved radically. She took the child to the martial arts school, where he received a black belt in kung fu after a while. Now no one dares to offend young Swayze. In addition to a black belt in martial arts, Patrick studied in two ballet schools.

As a dancer, Patrick Swayze made his debut in a Broadway musical called Grease and Goodtime Charley. He performed on the same stage with Mikhail Baryshnikov. His physical training with his growth of 5,8 feet (178 cm) and a weight 165-176 lbs (75-80 kg) allows him to perform complicated tricks. The injury of the kneecap put an end to the career of a dancer in 1978. It happened when Swayze reached notable heights in his career. He was the leading dancer of the troupe.

The operation made his return to ballet impossible. His mother saved him from depression. She reminded Patrick that he made his film debut, playing a couple of small roles in TV series as a child. Return to the set is an excellent option to realize ambitious intentions. After his moving to Los Angeles, he had to start all over again. At first, the dancer took on any job. Patrick worked in a factory, in a shop as a salesman and even as a carpenter. He needed money for the maintenance of a young wife.

The former dancer began to learn acting in the new place. Patrick's cinematic biography began in 1979. He appeared on the screen in an episode of the film Skatetown, the U.S.A. this year. Then he starred in the television series Renegades and M*A*S*H. The series North & South was successful for the artist.

In the early 1980s, Swayze appeared in full-length films. In 1983, he starred in the movie Outsiders, in the anti-Soviet film Red Dawn a year later. The movie Son of a Gun was also successful.

The film Dirty Dancing brought the international actor popularity, which was released in 1987. Patrick woke up famous. The movie became a cult immediately and had $ 213 million. And Swayze felt that his work brings not only satisfaction but also fame and a lot of money. He starred with Jennifer Grey in Dirty Dancing. The actor received $200 thousand and nomination for a Golden Globe.

The director tried to shoot each scene with one take because of the small budget of the film. After receiving a knee injury during the performance of the final dance, Patrick continued to dance with aching pain in the joint because he did not want to let the director down. The love scene in the water was awkward for the performers of the main roles. The directors had to remove the artists in October, while the rest of the crew was dressed in outerwear.

He had a lot of offers to star after the release of Dirty Dancing. Then, he chose the scenarios of the projects, in which he wanted to participate. There was a new film and even a few films every year, in which he starred. In 1987, the movie Steel Dawn was released, the film Tiger Warsaw was released a year later. Then there were the films Road House and Next of Kin.

In 1990, Patrick played another role in the dramatic film Ghost with young Demi Moore. The performer was nominated for the Saturn Award for his work in this drama. The director of the film did not plan to shoot Swayze in the title role. It was supposed to involve the wife of Demi, Bruce Willis. But the star of Die Hard refused to work in the melodrama, assuming that the film will not be popular.

Several candidates were considered for the role, including Nicole Kidman, Michelle Pfeiffer, Kim Basinger and even Madonna. Interestingly, Whoopi Goldberg appeared in the film thanks to the request of Swayze, who was a longtime fan of the comedian. The director chose the song Unchained Melody, choosing music for the soundtrack, which was known since 1955. These cover versions were performed by Elvis Presley, U2, LeAnn Rimes and other musicians.

In the early 1990s, Patrick starred in Hollywood projects City Of Joy and Father Hood. He appeared in the film Point Break together with Keanu Reeves. Patrick transforms into a surfer, a lover of free life, who becomes the leader of a gang of robbers.

While participating in the filming of the movie, Swayze performed many stunt elements himself, including skydiving. The end of the '90s was marked by the release of brilliant hits of the film industry Black Dog and Letters from a Killer.

Patrick is a professional dancer and owner of a black belt in kung fu in his cinematographic work, he never used the services of understudies. Once such reckless courage went terrible. Swayze fell off his horse on set and broke both legs. The recovery was long but his perseverance brought him success. Patrick could walk and even dance. It is interesting that the tragic case and serious injuries gave birth to a mad passion for horses.

Soon, he was engaged in their cultivation on his ranch in California. Later, Patrick Swayze took part in the race, which took place in the desert of the United Arab Emirates. Moreover, the desperate American overcame all distance and appeared the only one of the compatriots, who managed to reach the finish.

In the early 2000s, Patrick starred in the sequel Dirty Dancing and the film Dirty Dancing: Havana Nights. Although he played a cameo role, his fee was $5 million.

The last bright projects in Swayze's filmography were King Solomon's Mines, Keeping Mum and the serial film The Beast. He was nominated for a Golden Globe three times during his career in the cinema.

At the age of 18, Patrick fell in love with a 15-year-old ballerina Lisa Niemi, with whom he studied at the ballet school. They were married after three years. They went together to New York, where they performed in a Broadway musical. Swayze's personal life was happy but not easy. The only thing that marred it was the absence of children.

Lisa Niemi helped her husband to cope with alcohol addiction, which was developed in his youth. The spouse often thought of their divorce; Patrick scared her with his fights that are staged during his wild parties. Swayze managed to overcome the disease thanks to the rehabilitation course, on which his wife insisted.

Later, his wife turned into a real guardian angel of Patrick when she found out about the disease of her husband. The couple lived in love and harmony for 34 years, until the death of the artist at the age of 57 years. They lived on their favorite ranch in New Mexico the last time.

In March 2008, his doctor reported about cancer of the actor with the permission of Patrick Swayze. It was done because of the many rumors that were spread by the tabloids and in which there was a lot of untruths. Besides, the actor's photos, which were distributed by the paparazzi, frightened his fans. He had a net worth of $40 million in the year 2009.

At the beginning of the summer of the same year, Patrick said that he feels better, the growth of the tumor in the pancreas is stopped. Swayze believed that his surgery at the Stanford University Medical Center is effective in the fight against cancer. Besides, he resorted to the methods of Oriental medicine. During the treatment, the artist lost his weight, as he was forced to sit on a liquid diet.

At the end of 2008, Swayze shared his plans for writing his memoirs next year. But in January 2009, the actor was hospitalized with pneumonia. In April, doctors reported the progression of cancer.

Patrick Swayze's death occurred in mid-September 2009. Numerous metastases caused it in the liver. Mikhail Baryshnikov gave a part of the money for the funeral of the actor. The ash of the screen star was scattered over his ranch, as he willed.