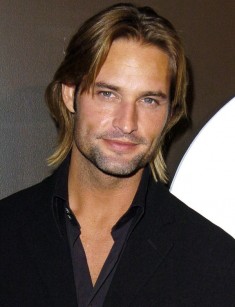 Josh Holloway is an American professional fashion model who subsequently became an in-demand actor. After the retirement from a modeling career, Josh Holloway became even more famous for playing the role of Sawyer in the mystical television series Lost. The work in the cult TV series turned Holloway into an in-demand actor, Josh continued to receive offers, and nowadays the actor is also known for his roles in the films Whisper, Stay Cool, Mission: Impossible – Ghost Protocol, Paranoia, Sabotage, and TV series Intelligence and Colony.

Josh Lee Holloway was born on July 20, 1969, in the American city of San Jose, California. He was the second child in the family of a surveyor and a teacher. Josh has three siblings.

When the boy was two years old, his family moved to Georgia, where they lived in an old trailer on a large area inherited by his father from a distant relative. The future actor his spent childhood together with the brothers, there were no other children in the neighborhood. The family was impoverished which was clear from the worn-out clothes of the children, as well as the rusty pick-up truck which the parents used taking the children home. To stop the bullying of peers, Josh Holloway fought more than once, and he was almost expelled from school.

From an early age, the boy began to think about an acting career, but the financial situation of the family did not allow him to attend theater courses. During the holidays, Josh worked on local poultry farms collecting dead chickens to earn some money. In his youth, the future actor even worked in a restaurant and at a construction.

At the age of 14, at the insistence of his mother, Josh began to play sports. Soon he managed to become a star of the school basketball team. In 1987, Holloway graduated from school and entered the University of Georgia, where he studied for a year.

When he was at the hairdresser, the handsome young man was invited to work as a model at the hairstyle fashion show. After the event, he was offered to shoot in the Macy’s commercial, which marked the beginning of his modeling career.

Josh Holloway did not miss a single offer, often trained in the gym, went to the auditions. It helped him to achieve steady but modest success. After a while, he was included in the top ten best models list. Calvin Klein noticed Josh among others.

When Holloway was 26 years old, he realized that his modeling career was coming to an end because younger models were invited to shoot more often, and his brutal image was becoming less and less popular (Josh's height is 185 cm, and the weight is 80 kg). Delicate young men began to attract attention because there was a demand for androgyny.

So Josh gave up his modeling career, then returned to the south and bought a large house. After a while, the country life became boring, and Josh decided to try his hand at the cinematography.

The beginning of Josh's acting career was more difficult than his modeling one. Josh Holloway gave his new house to his parents and went to Los Angeles to become an actor. He attended acting classes, but Hollywood was in no hurry to accept Josh.

From 1999 to 2004, the actor managed to play in several films, and TV series, including Doctor Benny, Cold Heart, Walker, Texas Ranger, Good Girls Don't, Angel. These roles did not bring him either money or popularity. The actor spent the money he saved and understood that it was time to find an ordinary job. Josh Holloway has already decided to become a realtor, but finally, he went to the audition of the series Lost.

Many actors auditioned for the role of Sawyer in this television series, and Josh was the last to attend it. While reading the monologue, he broke the chair for effect and won the directors’ hearts and immediately got the role that glorified him.

When Holloway decided to become an actor, he had to get rid of his southern accent, but the producers of Lost said that he should speak as he used to, which made the character of southerner Sawyer unique.

Josh's partner on the set was Evangeline Lilly, who was also his on-screen lover. Holloway, who was already married at that time, always answered the journalists' questions about the reaction of his wife to Josh's on-screen love affair.

After the success of the series Lost, the actor was invited to shoot in music videos for the computer game Command & Conquer 3: Tiberium Wars, where he played a NOD intelligence officer. It was followed by the roles in the films Whisper (2007) with Sarah Wayne Callies, Stay Cool (2009), Mission: Impossible – Ghost Protocol (2011), Paranoia (2013), Sabotage (2014).

Besides, Josh Holloway starred in the series Intelligence, which aired in 2014. The actor played the leading role of Gabriel Vaughn, an employee of the US Cyber Command, and a person with a rare brain mutation that allowed doctors to implant Vaughn a special microchip. Thanks to the chip, Vaughn could instantly connect to dozens of databases, process and reproduce visual and audio information.

The premiere of the series Intelligence attracted 16 million TV people, but a week later a third of viewers watched the project, and after the release of 13 episodes, the TV channel decided to close the series due to low ratings.

Handsome actor Josh Holloway has never lacked women’s attention. Before marriage, he had just short love affairs. At the beginning of his acting career, Josh was in no hurry to get married. He thought that a real man was obliged to provide for his wife, but he had no such opportunity at that time.

During his modeling career, Holloway met Indonesian Yessica Kumala. In a while, the young people began a relationship which did not last long. For several years, Josh and Yessica maintained friendly relations, then their feelings were reignited, and they began to live together.

The actor made a marriage proposal to the girlfriend in Hawaii after filming the pilot episode of Lost. They celebrated the wedding in the autumn of 2004. The newlyweds decided to buy a house and a yacht in Hawaii, where they lived during the filming of the famous series. In April 2009, the couple had a daughter, Java Kumala, and in February, a boy, Hunter Lee.

According to journalists and fans, Josh does not suffer from a superiority complex and, even now, remains an ordinary and openhearted person. Holloway also tried for some time to live with nature but was tired of such life.

In 2016, the actor played the leading role in the sci-fi series Colony. The action unfolds in the near dystopian future, in which humanity is enslaved by an extraterrestrial group. People live in Blocks, which are enclosed by walls. The group declared a curfew in the former cities. Many families were also separated by this force. People resisted such state of affairs and raised revolts, but the rebellion was suppressed.

Holloway's hero is a former FBI agent, Will Bowman, who secretly maintains contact with his wife, and they are trying to find the lost son. The Resistance agents propose Bowman to help humanity to overthrow the alien threat.

On January 12, 2017, the first episode of the second season of Colony premiered, and on April 4, 2017, they confirmed officially that the show would be renewed for the third season.

Nowadays, there are also rumors about the new role of Josh Holloway. IMDbPro, which is known as the most influential site of film rating, claims that Holloway will play the leading role of Geralt in the upcoming fantasy series The Witcher based on the popular series of books by the Polish writer, Andrzej Sapkowski. 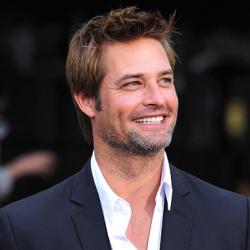