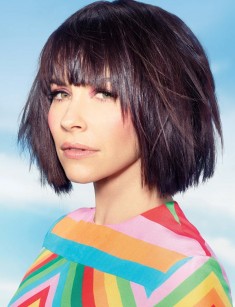 Evangeline Lilly is a famous Canadian actress. The girl has become famous after the release of the series Lost in which she played one of the leading roles. Later she appeared in the movies about Hobbit and superheroic pictures about the Ant-Man.

Nicole Evangeline Lilly is a full name of the actress. She was born on the 3rd of August, 1979 in a small Canadian town - Fort Saskatchewan. Evangeline and her two younger sisters grew up in a very religious family. Her father taught economics, and her mother worked as a cosmetic consultant.

The girl was actively engaged in the sport. In particular, she liked skating and snowboarding. In her childhood, Evangeline even didn't dream of the acting career – due to her parents’ Christian beliefs the family had no TV. She couldn’t stand the strict principles and traditions of her family that’s why at the age of ten the girl decided to leave her native town. Till that time she had already managed to change three schools.

Since childhood, Evangeline Lilly dreamed of helping people that’s why being a teenager she traveled around the world as a member of the volunteer organizations. The future actress has visited fourteen countries being a volunteer. Once, she had to go to Philippines jungles and to live there in the hut made of grass.

Lilly managed to change a couple of professions before the world has recognized her as an actress. For some time she was working as a waitress, later she became a stewardess in the Royal Aviation Airlines. Due to the flights, she succeeded in learning the French language perfectly. Then, Evangeline Lilly entered the University of British Columbia – the girl had a desire to proceed with her missionary activity at more professional level.

Once an employee of the well-known agency of Ford models came to her in the street and offered the girl to try herself as a model. Evangeline didn't have any particular interest in the model business, but she agreed to conclude the contract to pay for her studies. Further, she moved to Vancouver and began to take part in the fashion parades and photo shoots. Also, Evangeline participated in the advertising. Though, the girl has never considered herself to be a real model.

Evangeline Lilly began her acting career in 2002 with performing episodic roles. The actress appeared in the following films and series - Smallville, Freddy vs. Jason, The Lizzie McGuire Movie, Kingdom Hospital.

Lilly’s work in the series under the title Lost became a real breakthrough in her career. The actress has performed one of the leading and memorable roles. She got the role of the character Kate Austen – the girl, who survived the airplane crash together with other heroes.

Before the beginning of the shootings, the actress almost lost her role because she couldn't get a working visa to the USA. But as a result, the girl solved this problem and arrived at the necessary place with a delay of one day.

It’s noteworthy that the actors received only the script of the next series episode. As there were many deaths in this series, the actors didn’t know who would remain without work in the future.

Matthew Fox, Josh Holloway, Terry O'Quinn, Ian Somerhalder and other actors became Lilly’s partners on the movie set for a long time. It's remarkable that Ian's character died in the series quite in a short time. Though, the audience has liked the character so much and have fallen in love with him that from time to time the series creators returned Boone Carlyle during all the seasons in the flashbacks. Certainly, Somerhalder appeared in the last episode of the series.

The series had tremendous success and was broadcast from 2004 till 2010. This cult movie has won many awards - Emmy Awards and Golden Globe Awards. The actress herself has got thirteen nominations.

In 2008 there were released two pictures with the participation of the actress at once - The Hurt Locker and Afterwards. After the finish of the Lost series, Evangeline Lilly was planning to leave cinematography and to dedicate her life to the volunteering.

Despite this fact in 2011 she took part in the movie Real Steel. Two years later the pictures The Hobbit: The Desolation of Smaug and The Hobbit: The Battle of the Five Armies - the sequel to the film The Hobbit: An Unexpected Journey came out on the screen one by one. Both movies are the prequels of The Lord of the Rings.

Lilly performed the role of the forest elf called Tauriel who belongs to the pathfinders. But the girl has a lower social status than Arwen (Liv Tyler) and Legolas (Orlando Bloom). It’s noteworthy that there is no such a character in the original trilogy of the books. But the directors decided to include the elf girl to the pictures to add one more female character to the script in which male characters are prevailing.

According to the plot, Tauriel and a dwarf Kivi have a secret sympathy. The Elf even saves Thorin Oakenshield’s nephew from death for several times.

In 2015 the audience saw the star in the movie Ant-Man shot by Marvel comics. The actress performed the role of Hope van Dyne, a future Wasp and the daughter of Hank Pym who had created the superheroes' suits. Paul Rudd got the role of the leading character.

Before Evangeline Lilly took part in the cult series, she had been married to the Canadian hockey player - Murray Hone. During the shootings, she began a love affair with her colleague Dominic Monaghan who is known to the public due to his role of Charlie. Their feelings turned out to be so serious that the actress divorced and in 2005 the couple celebrated their engagement on the island where they were taking part in the series shootings. They were heading to the wedding, but their relations broke apart, and in 2009 the couple separated.

Since 2010 Evangeline Lilly was married to Norman Kali, who worked as an assistant director of the famous TV series. The couple has two children.

Their son Kahekili Kali was born in 2011. Four years later the actress appeared with the rounded belly at the premiere of Ant-Man having shown that she was pregnant again. In October 2015 one more daughter was born at the loving couple. Nobody knows the name of the girl.

In one of the interviews, the actress has shared that she has always dreamt of having six children. They already have two kids, and the young woman wants to adopt other four children. Evangeline and Norman have already found information about the necessary documents and conditions for this purpose.

After two pregnancies the beautiful green-eyed woman returns to shape in a short time. At present, with the height of 168 cm, the girl weighs 50 kilos. Lilly has confessed that she doesn't keep to particular diets, but she practices eating raw foods. Though such nutritional system is not ideal for everyone. Besides, the actress trains 4-5 times per week, working on the certain muscles groups each day.

Thousands of admirers watch Evangeline's personal life and creative career in the social network of Instagram. There the actress publishes her own and working photos and videos. Her fans have noted more than once that Lilly's character in the series Lost doesn't differ a lot from her image in life: the actress often doesn't need make-up and enjoys extreme sports.

In September 2017 the actress acted in the movie Little Evil. Lilly’s heroine is a girl called Samantha who gets married to Gary (Adam Scott). The girl thinks that the young man is an ideal husband and a prospective father for her son Lucas. Though the boy doesn't think so, and Gary can't get on well with the child. He even attends the courses for stepfathers. However, the man’s case is very difficult: Lucas is an Antichrist.

In July 2018 there will be released a sequel to Ant-Man under the title – Ant-Man and the Wasp. This time Paul Rudd will have an assistant Wasp performed by Evangeline Lilly.

The shootings of the picture are set for the summer of 2017.

On the 14 the of June 2018 the actors presented the superheroic film during the press conference in Taiwan. Moreover, Michael Douglas will return to his role in the movie, and Michelle Pfeiffer and Laurence Fishburne will become new characters in this picture.

In 2019 Evangeline will play the role of Wasp in the fourth part about the Avengers. There the superheroes will fight against Thanos who owns the Infinity Gauntlet. 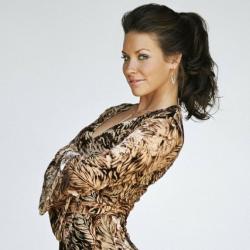