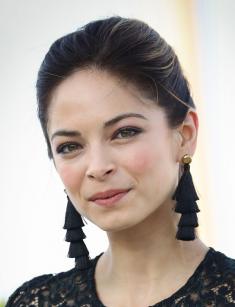 The viewers know the Canadian actress Kristin Kreuk in the main roles in the first series, which are based on comics Smallville and Beauty and the Beast.

Kristin Laura Kreuk was born in Vancouver, Canada at the end of 1982 in the international family: the father Peter is from Holland, the mother Deanna is Indonesian-Chinese. Both parents of the girl worked as landscape designers.

The family paid great attention to the physical development of Kristin and the younger sister Justine. In addition to studying at Eric Hamber high school, Kristin trained in gymnastics, swimming, karate. It was not forbidden to the girl to show her acting skills - to sing, to act in public. Kreuk appeared on the stage in school plays but as the actress was treated very critically.

The girl had to forget about professional sports because of a spinal injury. Kristin was planning to study psychology at Simon Fraser University when her exotic appearance attracted the casting Director of the series Edgemont. The Director was looking for a candidate for the role of Laurel young.

The Canadian series about the life of teenagers gained popularity in America and France and the young performer of the title role was nominated for a Leo Awards. Edgemont was aired for five years and it played a crucial role in the biography of Kristin. She did not give up the idea to enter the University but she hired an agent to look for a role in the movie or on television. Another work of that period was the role of Snow White and the Seven Dwarfs in the TV movie of the same name.

In 2004, she had another main role, this time in the youth comedy EuroTrip. Kreuk turned into the character Fiona in the picture. The agent was not left behind. After the release of Snow White and the Seven Dwarfs, the agent sent the video to producers Alfred Gough and Miles Millar, who selected the actors in the new project called Smallville. The casting ended and Kristin played Lana Lang.

Smallville is one of the most" long-playing " TV series in America, telling about the young years of the comic book hero Superman. The film was repeatedly nominated for various awards but did not receive any serious prizes. Eleven nominations belong to Kristin Kreuk. The young actress starred in the full-length films between seasons but these films brought neither popularity nor the enthusiasm of the critics.

Sports skills were useful to Kristin on the set of the film Street Fighter: The Legend of Chun-Li. The film, based on a computer game, told about a girl who owns martial arts and dreams of revenge for her father. Street Fighter fell through the box office. The role of Nazim Khan in the drama Partition brought much more enthusiasm; it is about the love of the Muslim woman and the soldier of the British army.

Kreuk was back on TV with the small role in the TV series Chuck with the participation of Yvonne Strahovski. She had main roles in the films Vampire, Space Milkshake, Legend of Earthsea, Irvine Welsh's Ecstasy. The last is the screen adaptation of the international bestseller of the cult writer Irvine Welsh. Adam Sinclair appeared in the main role of the drug dealer Lloyd.

Another breakthrough in Kristin's career occurred with the main role of Catherine Chandler in the drama series Beauty and the Beast. The fantastic series is another retelling of the story of Beauty and the Beast, originating in the medieval tales. This time it was about the detective, played by Kreuk, and Dr. Keller. The doctor is a former soldier who underwent genetic modification, thanks to which he survived. The picture began as an ordinary police procedure; the mythology gradually added to the romance. The relationship of the police and the mutant, which started with mutual aid, developed into deep feelings.

The actress admitted that in the scenes with the fall was shot the doubler, but she showed her skills in the fights, earned not for nothing a purple belt in karate.

Beauty and the Beast was awarded two People’s Choice Awards, Kristin was nominated for it twice and won the nomination "Favorite actress of the fantastic series". Kreuk is recognized as the most beautiful Canadian, according to the results of voting at Entertainment Canada.

At the end of 2016, Kristin starred in the short sci-fi film the Emissary about the post-Apocalypse era. The actress appeared in the image of a diplomat who arrived on Earth, who was tasked to unite the Royal clan and the ancient dynasty.

Like any celebrity, private life, hobbies of Kristin attract the attention of her fans. But the actress is not in a hurry to please curious people with news. The girl's name did not appear in the headlines of the tabloids in connection with any scandal for the entire film career.

Devoted fans created multiple pages on "Instagram", which are updated regularly. In December 2017, Kreuk created her page once again, however, not verified, and there is a little photo.

Christine learns yoga asanas, draws, engaged in self-education in her free time. She is closed by nature that is why she does not like social events, but occasionally gets out in night clubs where there is the sound of hip-hop. She also likes to travel to exotic countries, which makes raids on local shops. By the way, Kreuk represents the cosmetic brand Neutrogena.

The actress is a member of humanitarian organizations: the Team Power Smart, the Red Cross and she founded the company Girls by Design together with her friend, helping girls in the choice of education and profession.

Perhaps the only time Kristin was forced to talk about herself was when the paparazzi caught her and a colleague in the filming of Jay Ryan at the airport. The couple went on vacation. The young man was immediately counted as the potential husband of the actress, he suited Christine in temperament, in the opinion of others.

Another name in the list of the heart passions of the star of the series is the actor Mark Hildreth, who starred in the films Pirates of the Caribbean At the World's End, The Tudors, Supernatural.

The last passion of Kristin was Eric Putzer, who worked as a sound producer and recently wrote scripts including to the new project with the participation of Canadian. According to available information on the Internet, she does not have children and an official husband.

In 2017, a Canadian actress broke a long silence; there was the presentation of the next show featuring Kristin Kreuk Burden of Truth. By the time of the release on the channel CBC, the series changed its name to the Burden of Truth. In the film, the actress plays Joanna Hanley, a young lawyer, who conflicts with her father. Kristin implements her producing ambitions in the movie.

Kreuk produces the documentary film together with her friend about Phoolan Devi, the member of Parliament of India, the leader of the criminal community.

By the way, Kristin voiced the main character of the universe of Ancient China Shuyan in the graphic novel Shuyan Saga, performed in 3D. Shuyan is a Chinese princess who got tired of idle life and went to study kung fu.