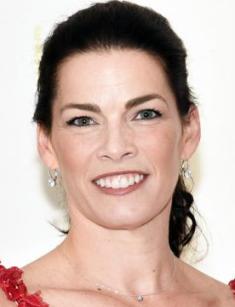 The American female single skater won the World Championships twice and earned silver and bronze medals at the Olympic Games in the 90s. However, she is famous not only for victories but also for her scandal. Her competitor hired a man who hit Nancy Kerrigan's leg while trying to prevent the skater from competing in the National Championship. Twenty-five years later, the feature film was based on this story.

The would-be star was born in Massachusetts in the late autumn of 1969. Nancy Ann spent her childhood and youth in Woburn.

In addition to Nancy, the Kerrigan family had two sons: Michael and Mark. The boys were keen on ice hockey. 6-year-old Nancy began skating, following the example of the brothers. The mother took the girl to the skating rink in neighboring Stoneham. The little girl learned to skate quickly, and the coach advised the parents not to give it up, predicting Nancy Kerrigan a great future in sports.

The parents barely made two ends meet. The father was a welder and worked multiple jobs to support the children. Daniel Kerrigan got a job as an ice resurfacing driver when he did not have money to pay for his daughter's studies at the figure skating school. So, Nancy could train for free.

At the age of 8, the girl could skate confidently and performed complex elements, and when she was nine years old, Nancy won the first award. Until the age of 16, the athlete was trained by Theresa Martin, then, worked with coaches Evy and Mary Scotvold until the end of her professional career.

In 1987, the 18-year-old athlete placed fourth at the junior level at the 1987 U.S. Figure Skating Championship. Sports commentators and fans noticed both the advantages of Nancy (a strong jumper) and the weaknesses of the figure skater, who failed to perform compulsory figures. But Kerrigan worked hard improving the technique and made her senior debut the following year.

In 1991, the ice star made a breakthrough in the sports career. At the national Championship, Nancy placed third and qualified for the 1991 World Figure Skating Championships, where she repeated this success. It was a significant result because her place was a part of the sweep of the women's podium by a single country. Kristi Yamaguchi won the gold medal, and Tonya Harding was a runner-up.

1993 was full of events. Kerrigan became the United States champion, but she finished fifth at the World Championship in Prague, performing a bad free skating. The Russian skater, Oksana Baiul, won there.

The following season, Nancy Kerrigan refused sponsorship contracts and stopped appearing in advertising, focusing on training. Conversations with a psychologist and hard work helped the athlete to overcome obstacles and prepare for the Olympics.

The incident in January 1994 almost disrupted the participation of the skater in the Olympics in Norway. Kerrigan was attacked by Shane Stant. Nancy’s main rival, Tonya Harding, hired her ex-husband to bludgeon on Nancy’s leg at the Championship in Detroit. The attack’s immediate aftermath was recorded on cameras and caused a wave of people’s sympathy around the country.

Nancy Kerrigan got a severe bruise, but the bone was not broken. The woman could not participate in the US championship, but the USFSA included the skater in the Olympic team. Kerrigan recovered quickly and started training. In Lillehammer, the American almost reached the top of the podium, the skater won a silver medal, losing to Baiul.

After two years, the couturier sewed two more dresses for the skater. She wore a black and white dress for a short program and a champagne-colored dress set with rhinestones for the free skating. They paid $23,000 for Nancy’s costumes.

The American star put an end to her professional career after Lillehammer, focusing on ice shows and musicals. Nancy Kerrigan appeared in the comedy Blades of Glory and starred in a television show on Fox.

The former skater, famous for her stinging remarks and fair assessments of the work of her colleagues, is invited as a special correspondent to competitions and tournaments. The ex-athlete has written a book “Artistry on Ice,” describing the advanced figure-skating technique.

In 2004, the star was inducted into the United States Figure Skating Hall of Fame, and four years later Nancy was also honored at Ice Theatre of New York's annual benefit gala.

Nancy Kerrigan graduated from Emmanuel College in Boston, where she studied business. After completing her sports career, she created the Nancy Kerrigan Foundation to support blind people, paying tribute to a blind mother.

In the mid-1990s, Nancy married Jerry Solomon, who worked as her agent. The man is 16 years older than Kerrigan. It is the first marriage for the athlete, and the third for Solomon.

The couple has three children: two sons and a daughter. The girl was born in 2008. The family lives in Massachusetts.

In 2010, Nancy Kerrigan’s father died tragically after a fight with his son Mark. The figure skater’s brother was convicted of manslaughter.

In 2017, the famous athlete was in the spotlight again after the premiere of the black comedy I, Tonya. The film tells the story of Kerrigan and Harding and is made by Australian director Craig Gillespie.

The movie premiered in Canada in the autumn of 2017. Russian viewers saw the comedy in February 2018. Actress Margot Robbie landed the role of Tonya, and Caitlin Carver appeared as Nancy Kerrigan.

Nancy Kerrigan has a net worth of $8 million.