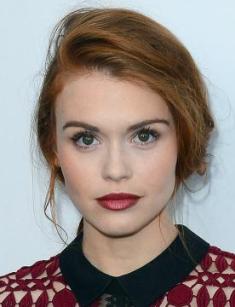 Holland Roden is a young Hollywood actress; the audience saw her debut in 2007. She is famous for the role of Lydia in the teen mysterious drama series Teen Wolf. Besides, the artist participated in the drama series Grey’s Anatomy and the detective thriller CSI: Crime Scene Investigation.

Holland Marie Roden was born on October 7, 1986, in Dallas. The parents worked as medics and saw their daughter as their successor, but the girl interrupted their plans from early childhood: six-year-old Holland took an interest in the history of the British royal family. She liked sophisticated and delicate Princess Diana and often played her; she copied her mimics, gestures, manners, and behavior.

As the parents saw their child’s fondness of the princess, they took her to a drama studio. Little Holland was excited: she could express herself in various forms there. Simultaneously, the would-be star went to Hockaday School for girls. The young woman was interested in science, and studying was easy for her. Adults believed the passion for theater performances at children’s camps was only self-indulgence.

When Holland graduated from school, she followed in the footsteps of her parents and went to Los Angeles. The young woman entered California State University to study molecular biology; she was going to become a cardiothoracic surgeon but changed the direction of her life three years later, when she realized she did not want to devote her life to medicine. Soon, Holland chose gender studies as her major; she received a degree at California State University.

In 2007, the actress debuted in the popular detective series CSI: Crime Scene Investigation; she got a secondary role of Kira Dellinger. The next year was marked with the lead part of Bronwyn in the series 12 Miles of Bad Road; however, the project was closed soon. Besides, Roden personified Emily in the American drama series Lost and Missy Gallavan in the detective series Cold Case.

In 2009, the beginning actress succeeded at four auditions. She played Sascha in Pushed and Yogurt Peddler in the comedy TV series Weeds. In Bille Woodruff’s Bring It On: Fight to the Finish, the artist played the main character’s step-sister Sky. Finally, Roden worked on Dan Harmon’s TV series Community; her role was small and episodic, though.

2010 brought two more projects. In the series Criminal Minds about the FBI agents, Holland appeared as Rebecca Daniels. In The Event by Nick Wauters, she played young Violet. As the story runs, an alien lifeform is discovered in Alaska; the following events in the United States are pictured.

The next year, the artist joined the cast of the drama series Memphis Beat; she personified Jill Simon in the episode “Lost”. At the same period, Holland received the starring role in the American youth series Teen Wolf: she played Lydia, an active and popular high-school student and appeared in more than a hundred episodes.

While the actress was busy with the series, she was also engaged in Grey’s Anatomy by Shonda Rhimes. She was given the role of Gretchen Shaw in “This Magic Moment”. The same year, Holland had the lead role of Gabby in A.D. Calvo’s horror House of Dust. Her character witnesses the echoes of the crimes committed by a serial killer in the middle of the previous century.

In 2014, the woman appeared on the TV screen in the comedy show Fashion Police where the hosts discussed celebrities’ outfits.

The actress not only participates in movies but also collaborates with musicians in their music videos: fans can enjoy her work in videos by Animals, Seasons, Dutch Party, The Lighthouse and The Whaler.

Although the artist tries to keep her personal life private, some facts have been revealed. In 2012, Holland told journalists she had no time to date: shooting in movies and series took all her time and strength. Rumors had it the woman had a romance with Tyler Lee Hoechlin; however, she denied it and said they were only friends.

Soon, people were discussing Roden’s affair with her colleague Ian Bohen; once again, the artist said they were on friendly terms and nothing more. Colton Haynes was the next actor named Holland’s boyfriend: the young people frequently went out together and hugged tenderly. The actress marked they were friends once more and mentioned their relationship was special. Soon, the media reported that Haynes came out as gay.

In 2014, fans learned that the charming beauty’s heart was taken: she wrote on her Twitter she dated Max Carver. Holland had to tell the truth after a wave of speculations about her affair with Dylan O'Brien. Soon, the couple’s photos together appeared on the Internet; they looked happy and relaxed.

October 2017 brought the premiere of the horror TV series Lore. The artist personified Bridget Cleary, the woman who really existed and was murdered by her husband; the man believed that fairies had kidnapped his wife, and the person near him was her deceiving copy.

In 2018, Holland appeared in another horror TV series, Channel Zero: Butcher's Block. The story is based on a popular Internet legend about a children’s show related to a series of murders in the 1980s. The actress played one of the lead characters, Zoe Woods, fighting a mental disorder.