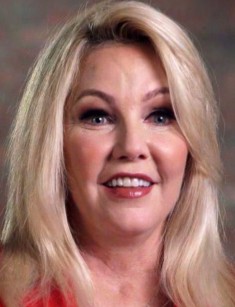 Heather Locklear is a famous American actress who starred in the TV series T. J. Hooker, Dynasty and received six Golden Globe nominations. She was a sex symbol and "the Hollywood TV bitch in the 1990s".

Heather Deen’s biography began on September 25, 1961. The girl was born in Westwood, California. By that time, her parents, William Robert and Diane Locklear, had already had three children.

The father of the future television star was a UCLA administrator. The mother's workplace was the Disney Studios. She worked as an administrative assistant. Heather attended Newbury Park Primary School.

The parents of the future star were religious people, and therefore they adhered to strict discipline and encouraged the children to work. Thus, an acting career was out of the question. Moreover, the little girl was going to become a pilot.

Young Heather was not an ideal child. Her snagged teeth, problem skin, and extreme leanness caused the classmates to make fun of the girl.

After graduation, the girl entered the University of California. Having a bright appearance, she worked as a model in advertising during her studying. But since Locklear dreamed about the stage, she went to auditions and at the age of 18 began an acting career and played in several episodes.

Viewers liked Heather when she played a role in the soap opera Dynasty. 1981 was successful for the beginning actress. Appreciating Locklear’s acting in this series, producer Aaron Spelling decided to continue the collaboration and invited the girl to appear in his next television film T. J. Hooker.

The actress’s career started very successfully, but in 1989 the film The Return of Swamp Thing was released, and she received the Golden Raspberry Awards – Worst Actress for the role of Abigail.

In 1993, Heather regained her good reputation, playing Amanda Woodward in the soap opera Melrose Place, which was also produced by Aaron Spelling. This role was so successful, and the film was so popular with the viewers that another six seasons were shot.

For the portraying of the TV bitch, Amanda, Locklear received four consecutive Golden Globe nominations. She did not win the prize, but the First Americans in the Arts, a non-profit organization, named her the Best Actress in a Television Series. She played the role of one more bitch, Caitlin Moore, in the comedy sitcom Spin City brilliantly and also received two Golden Globe nominations.

There are not only TV projects but also full-length films, for example, Money Talks in Locklear’s filmography. She filmed in this movie while working in the series, but the attempt to appear on the big screen was not successful. In the early 2000s, she could not make a breakthrough in her career. After the release of the series Dynasty and Melrose Place, Heather got the title of “the best TV bitch of the 1990's”, and she was always associated with this character.

It is an interesting fact that it was the actress who could have played the role of Susan Delfino in the incredibly popular TV series Desperate Housewives. Participation in the project could have been the second surge of the popularity of the actress who was considered the queen of series. But she turned down the role. The reason for the decision is unknown. In any case, it was the beginning of bad luck in Locklear’s career.

In 2004, the woman decided to change the activity and try her hand as a producer. The attempt was unsuccessful because the television drama set LAX was closed after the release of the 13th episode. After this failure, the career of the star faded away. Nowadays Locklear sometimes appears in episodes of series as a guest star.

Heather Locklear was not just the star of the series Dynasty, and she was considered a sex symbol of the 1990's. Her height is 165 cm, and the weight is 56 kg. Numerous fans followed the news about her personal life. Her boyfriends were Tom Cruise, Scott Baio, etc. The actress married several times. Locklear’s first husband was the drummer of the band Mötley Crüe, Tommy Lee. Their love story lasted eight years. The couple married in May 1986 and divorced in August 1993.

The woman was alone for a while, but on December 17, 1994, she married Richie Sambora, the famous guitarist of the band Bon Jovi. In 1997, the couple had a daughter, Ava Elizabeth. The girl wants to follow in her famous mother’s footsteps, and at the age of 12, she already began a modeling career, participating in Richie Sambora’s fashion collection show.

As for the marriage, in 2006, Locklear’s representative made a statement about the couple’s intention to file for divorce. The family broke up officially in 2005 without waiting for a divorce because Locklear's husband began dating her close friend Denise Richards.

In April 2007, the actress began relationships with Jack Wagner. The star of the series Melrose Place became engaged in 2011, but in February of the following year they broke up. The reason was Heather's alcohol and drugs abuse.

Locklear’s addiction led to career failures. After the 2000s, only problems in her personal life and unsuccessful photos without make-up in the police stations attracted the attention of the press. The actress went to the hospital several times because of alcohol and drugs overdose.

In March 2008, she attempted suicide, and her relatives insisted on treatment in the mental health clinic where she spent four weeks. One more accident, which could have ended tragically, occurred in January 2012, when Heather decided to take medicine with alcohol.

The latest information about the former sex symbol says that she tries to stay young with the help of plastic surgery, actively posts photos on Instagram and continues to use illegal drugs and alcohol, has conflicts with her boyfriends.

In February 2018, the actress was arrested for attacking her boyfriend, Chris Heisser. The woman caused the victim’s actual bodily harm, and he almost lost his nose. The actress’s brother called the police because he could not break up a fight. The cause of the conflict is jealousy.

When the police arrived, they also fell prey to Locklear’s explosive temper because she kicked three cops, who arrested the troublemaker. She spent a night in prison, paid $ 20 000 and was released on bail. 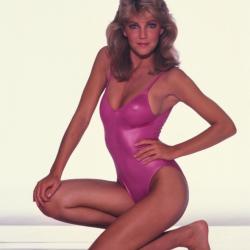