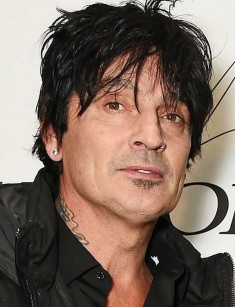 American drummer Tommy Lee has never distinguished himself with good behavior, which did not prevent him from gaining worldwide fame. The press has repeatedly written about the excesses and fights of the eccentric and bright musician. Moreover, Tommy is famous for his numerous love affairs such as relations with Pamela Anderson.

The real name of the future musician is Thomas Lee Bass. He was born on October 3, 1962, in Athens (Greece). The father of the boy was an American U.S. Army sergeant, and his mother was the famous Greek model, who became well-known for participating in prestigious fashion projects and was a Miss Universe Greece, 1957.

When the boy was one year old, the family had to move to the USA because of the father's service. Thomas grew up with his younger sister Athena Lee, who in the future chose the career of a drummer.

The boy showed an early interest in music. When Thomas was four years old, the parents presented him a drum which helped to improve his creative abilities. The drumming greatly impressed little Lee, and the instrument became the primary attribute of his further life.

Thomas received his first drum kit when he was a teenager. The young man was unspeakably glad. This gift helped to determine the career choice because the guy decided to become a musician.

As for the musical preferences, Lee listened to rock bands of those years. Tommy's main drumming influences were the songs of the band Kiss. A little later the guy repeatedly mentioned that he looked up to Peter Criss and did not stop admiring him.

Lee started his music career when he was under the age of 20. He abandoned his studies at school to develop the creative skills and make his way to the top of show business. Tommy together with his childhood friend, Nikki Sixx, founded a band where he became a drummer. At first, the musical group had no name, and the musicians decided to call themselves Mötley Crüe only at the end of 1981.

After the release of the first album, the performers became more and more popular every day. In total, they recorded nine studio albums, sold more than 80 million copies. The band even went on a tour with rock singer Ozzy Osbourne, which Tommy told in an interview for the documentary film God Bless Ozzy Osbourne.

Failing to stand the test of fame, the musicians led a riotous life, spending money on alcohol, drugs, and women of easy virtue. After the band's 20 years of existence, Tommy Lee published a book entitled The Dirt, which revealed the secrets of the participants.

While working in the rock band, Thomas released several solo albums. They were successful and became popular with the fans of the bands, where the musician performed as a drummer. Moreover, in 1999, Tommy created the band Methods of Mayhem, temporarily leaving the position of a drummer in Mötley Crüe, but the project lasted about a year.

Later, in 2009, Tommy announced the restart of Methods of Mayhem, and the band released several singles.

Tommy Lee tried his hand at acting. He starred in episodes of V.I.P. and Vanilla Sky. In 2002 he appeared in the television series Fastlane. In addition to filming, the drummer created more than 20 soundtracks to films and series. Perhaps the most significant work of the musician in the cinematography was the role in the movie The Dirt, based on his book, where Thomas played himself.

In 2015, the band Mötley Crüe officially broke up, and the participants have no right to tour under the Mötley Crüe moniker. Tommy’s style of play had an impact on modern American bands, and different artists imitated the early image of the band.

After Mötley Crüe breakup, the rock musician started touring as an electronic dance music DJ. Not all fans appreciated this kind of Lee's creativity. But Tommy said in one of the interviews that he should not follow the usual direction because he wanted to try his hand at different activities.

Tommy's personal life has had many tragedies, ups, and downs. The first wife of the drummer was model Elaine Starchuk, but the marriage lasted only a year. In 1986, the man married actress Heather Locklear, and their official relationship lasted about seven years.

A femme fatale in Tommy's life was Pamela Anderson. The story of the couple's relationship still has a lot of secrets and intrigues. The young people married four days after they met. Pamela gave birth to Lee’s two sons, Brandon Thomas and Dylan Jagger. The couple was always involved in scandals and conflicts, so the marriage broke up three years later.

But it was not the end of their story. Despite the official separation, people saw them together for a long time. In 2002, Anderson and Lee used the same needle making tattoos. After that, they were diagnosed with hepatitis C. The actress and musician managed to make a complete recovery from it only 13 years later.

Tommy and Pamela repeatedly reunited and separated again. The last reunion happened in 2008. But the happy life with the children did not last long. The star of Baywatch and the drummer soon finally split.

In 2014, Tommy Lee announced his engagement and said that he found an ideal girl and wanted to spend with her the rest of his life. The drummer’s girlfriend was Sofia Toufa, but for unknown reasons, the wedding was canceled, and the couple broke up.

For the first time, people found out about Lee’s relationships with Instagram-star Brittany Furlan, who was known for the funny videos on social networks, in 2016, when reporters took pictures of the lovers in California. Two years later, on February 14, 2018, the musician made a marriage proposal to the woman, presenting a heart-shaped ring. Brittany agreed, and the wedding ceremony took place at the end of May of the same year.

The newly-married couple wrote about the wedding on social networks, posting the same pictures of the celebration. The groom and the bride spoke marriage vows in front of a decorated arch, strewn with pink rose petals. It is an interesting fact that Tommy and Brittany did not wear an elegant suit and a wedding dress, but white terry robes and slippers. The photo was taken at the Beverly Hills Hotel. It is the woman’s first official marriage.

Nowadays the drummer and DJ is continuing his creative career, cooperating with contemporary performers.

Tommy Lee's height is reportedly 189 cm, and the weight is about 83 kg. The drummer’s zodiac sign is Libra. 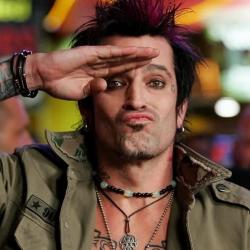