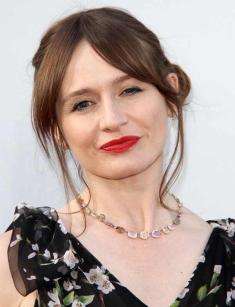 Mortimer, mostly known for acting in Chaos Theory and Hugo, will turn 48 this year. In her 30-year career, the celebrity has starred in more than 50 pictures and shows. Have you seen at least one movie featuring the actress? It’s high time you knew something new about her!

Emily Mortimer's birthplace is London. She was raised in the family of John and Penelope Mortimer. As for her parents' occupations, her dad worked as a dramatist while her mother was a housekeeper. Emily was not the only child in their family – she was brought up alongside a younger sister. Besides, she has three half-brothers.

While at school, the celebrity was a real star of its performances and concerts.

To earn a living, young Mortimer contributed to a local magazine.

Being a college student, Mortimer joined its drama squad and appeared in numerous plays. Once her talent was noticed by an agent who later offered her a role in a TV adaptation entitled The Glass Virgin by Catherine Cookson. Around that time, Mortimer was seen among actors of the pictures named Coming Home and Sharpe's Sword.

1996 was marked by her appearance in the movie Lord of Misrule. Two years later, fans could see Mortimer playing in the picture Elizabeth and in the series entitled Cider with Rosie.

The year 2000 brought the actress role of Katherina in the musical named Love's Labour's Lost. Remarkably, while appearing there, the celebrity got acquainted with her future spouse. Besides, Mortimer had a real breakthrough acting in Disney's The Kid. In 2002 she added the picture The 51st State to the list of projects she has starred in.

Later she auditioned for playing in Lars and the Real Girl, passed it well, and the picture premiered in 2007. The same year, The Pink Panther featuring the actress was shown on screen for the first time.

In 2009 Mortimer was seen portraying Rachel in the picture Shutter Island. Besides, there is the 2009 movie entitled City Island in her filmography.

In 2010 one more project featuring the celebrity was shown on screens – the movie Leonie. The following year, she was cast of Our Idiot Brother, playing one of the secondary roles. In 2013 Mortimer acted in the comedy series named Doll & Em alongside Dolly Wells and Ewan McGregor.

As for Mortimer’s most recent projects, in 2018 she co-starred alongside Emily Blunt in the picture Mary Poppins Returns.

As for Emily Mortimer's private life, she has a husband named Alessandro Nivola. The two got acquainted while playing in Love's Labour's Lost. In 2003 the partners tied the knot – their wedding ceremony in Turville. Nowadays, Mortimer and Nivola are parents for two kids. The family currently resides in Brooklyn.

Apart from acting, Mortimer is not a stranger for business. So, she has her own line of jewelry she sells through the Internet.

Many people suppose Bob Mortimer, a popular comedian, is Emily’s relative. However, actually they are not related.

Emily Mortimer's net worth is evaluated at $7 million. As for her salary, she earns $60,000 per episode.