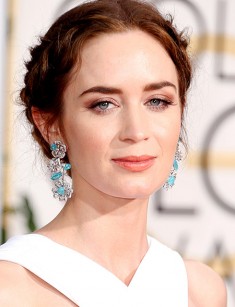 Emily Olivia Leah Blunt was born in February 1983 in London in a respectable family. Her father was a famous British barrister. Her mother was a former theater and movie actress. After she got married she finished her acting career and started to teach at the school.

Emily Blunt was the second child in her family. Her elder sister's name is Felicity. Later two other children were born - Susanne and Sebastian. The uncle of Emily - Crispin Blunt was elected as the Conservative Member of Parliament.

Her grandfather Peter Blunt was a retired General-Major.

In childhood, Emily had a fancy for horse riding and music. The girl was learning to sing and to play the cello. Red-haired Emily even didn't dream about the actress career: since childhood, she had one obvious defect - she stuttered badly. Therapy sessions helped her to get rid of this problem.

But the greatest effect was achieved in her studies at the drama group, where the talented teacher taught Emily Blunt to imitate someone else's voices. In such a way she managed to cure her malady.

When Emily Blunt was 16, she became the student of the private college, which was known for its special programme of actors training. A few months later Emily appeared on the stage in the play "The Royal Family". Besides Emily Blunt, the famous artists already known to the public took part in this performance. However, a fragile girl managed to stand out among them and was successful. For this debut role, Emily was named "The Best Newcomer" by the newspaper "Evening Standard". Emily managed to prove her success on the stage in 2002 when she appeared as Juliet in the performance based on Shakespeare's play.

Emily Blunt began her career in cinematography in 2003. Her aristocratic appearance defined the roles, which were proposed to her by movie directors. In the beginning, she played a significant role in the dramatic historical series "Boudica". Then she appeared as a character of one of the King's wives in the series "Henry VIII". Also, Emily Blunt played the character of a capricious aristocrat in the popular detective series "Agatha's Christie Poirot".

Emily got some scandalous fame after the drama movie "My Summer of Love" was released on the screen in 2014. In this movie, the character of Emily was filmed in the lesbian scene. For this work actress was awarded by BAFTA. At last, directors saw Blunt in a new role and they started to invite her to play in movies, where she didn't have to present aristocrats in medieval costumes.

Emily Blunt took the part of the problem teenager in the drama "Gideon's Daughter". Bill Nighy was her father in this movie. This project received a great number of positive feedbacks from the movie critics and much attention from the audience. Emily was nominated for the Golden Globe for Best Actress in a Leading Role.

After a couple of insignificant roles in 2006, Emily Blunt got the role, that made her extremely popular. She played together with Susan Sarandon, what already guaranteed tremendous success. It was the Australian drama, released on the screen under the title "Irresistible". Her eminent colleague highly appraised the talented young actress and insisted on her participation in the new movie "The girl in the park".

The year 2006 was generous for significant roles. For example, Emily Blunt played a remarkable role, even though it was secondary, in the movie "Devil Wears Prada". She did her best not to get lost in the shadow of such well-known colleagues as Meryl Streep and Anne Hathaway. To get this role a fragile Emily had a few pounds to lose because according to the script she must have looked sickly thin. Her acting was highly appreciated: at first the actress was nominated for the Golden Globe and for the BAFTA.

After the movie came on the screen, Hollywood finally accepted the new British star in its ranks. Eminent directors were vying with each other to invite her to take part in their movies. In 2007 Emily Blunt appeared in the movies "Charlie Wilson's War" and "Wind Chill". A little bit later the movies "Dan In Real Life" and "The Jane Austen Book Club" were released on screen. In the latter project, the actress was very convincing in the role of French language teacher.

Next year her fans saw their favorite actress in the drama "Sunshine Cleaning". Right after this the comedy "The Great Buck Howard" came on the screen. Thus, the British actress was very natural both in dramatic and comedian roles.

"The Young Victoria". Emily played the character of the young Queen Victoria. This role brought her the Best Dramatic Actress nomination in the Golden Globe Awards. The same year she took the part in the comedy project "Gulliver's Travels".

The year 2010 was signified with the leading role of Emily Blunt in the Gothic thriller under the title "The Wolfman". The British actress played the role of the beloved woman of the major character, acted by Matt Damon.

In 2012 two notable movies featuring Emily Blunt were released: a fantastic blockbuster "Looper" and a British comedy "Salmon Fishing in the Yemen" directed by Lasse Hallström. Ewan McGregor became the partner of the actress in this movie. In the beginning, the comedy was filmed in London, later in Morocco. For the role of the financial counselor Blunt was nominated for the Golden Globus for the fourth time.

Among the most successful pictures featuring the British star, the following can be noted: "The Five-Year Engagement" and "Arthur Newman". In the last movie, she worked together with Colin Firth.

In 2005 Emily Blunt got acquainted with the Canadian musician Michael Bublé in Australia. Their love affair lasted for 3 years. The couple lived in the house in Vancouver which was bought by the actress. But in 2008 their love affair was over: their working schedules didn't coincide. Lovers met each other less and less, and, at last, all this led to the final break-up of their relationship.

In 2008 Emily Blunt had a new period in her private life: Anne Hathaway introduced the British star to the American colleague John Krasinski. Soon Blunt and Krasinski got engaged. They celebrated their wedding at villa of their mutual friend George Clooney on the Italian lake Komo.

At present couple lives in Los-Angeles.

In 2014 their daughter Hazel was born, and in 2015 Emily got American citizenship. 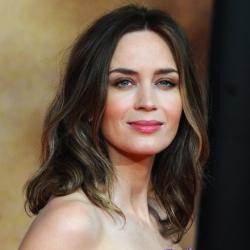