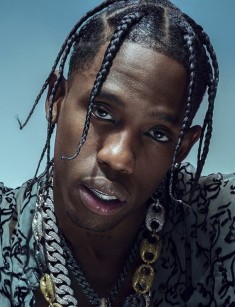 Reputable music magazines call Travis Scott the king of chaos: the police have often arrested the American musicians, sometimes, when he was on the stage, and accused him of organizing the disturbances.

Scott’s explosive energy and incredible special effects ignite crowds; that is why fans love the musician. The rapper calls his admirers “ragers”; his daughter Stormi has the same nickname.

Jacques Webster II was born on April 30, 1992, in Houston. He was brought up by his grandmother for some time: the parents were busy building their careers. Jacques’s mother worked in the telecommunication company AT&T, and the father was a businessman. When the boy was a school student, he moved to the suburban area of Houston where his father worked: most of his business was situated in Missouri City.

Jacques had a sister and a brother. He went to the Elkins High School known for its football and baseball stars and participated in the theater club. Kendrick Sampson famous for the series The Vampire Diaries and Chrystal Stewart, the Miss USA 2008 winner, had finished the same school several years earlier.

In his interview to Billboard, the rapper said he wanted to become a nephrologist when he was a kid. However, teenage Jacques loved music most of all. Although he entered the University of Texas at San Antonio, he quitted in a year. The shocked parents deprived the young man of finances to make him come back to education. These challenges hindered the musician’s career, but he met T.I. eventually.

On his third birthday, the boy received drums from his father; he mastered playing the drums as well as piano. Still, he did not become a drummer: according to Rolling Stones, unlike beats and rap, drums did not attract girls.

At 16, the high-school student dared to show his art: he uploaded his works created with his childhood friend Chris Holloway on My Space. Their duo was named The Graduates. In his last school year, Webster formed a new group; The Classmates included his peer OG Chess. Together, the young musicians created the songs “Buddy Rich” and “Cruis’n USA.” However, the group had different opinions (including the financial issues) and split up. At that period, Travis Scott quitted the university, and his parents supported him no more. Thus, he needed to earn some money.

Webster went to New York where his friend Mike Waxx worked; Mike owned a hip-hop portal and hoped his connections could be useful. Still, the dreams were crushed. The beginning musician lived at his friend’s and spent days in the studio Just Blaze’s, but his work was no success. Webster went to Los Angeles, but his acquaintance who had promised to help him did not pick up his phone.

Depressed and desperate, the young man came back to Houston. He met with his parents, but the conversation led to a conflict, and the parents got Jacques out of the house.

At that time, the rapper received an invitation from the producer and rapper T.I. His representatives explained that the musician took an interest in Travis’s “Lights.” Meeting T.I. became the turning point in the young man’s career.

In 2012-2014, the musician created several singles; the music video for “Quintana” was also released. Webster cooperated with T.I., 2 Chainz, and Big Sean. He signed the agreement with GOOD Music, the label found by his icon Kanye West. The company helped the young man release the debuting mixtape Owl Pharaoh which was uploaded on the Internet and available freely.

The next year was marked with the new mixtape Days Before Rodeo; musical critics began to respect Scott and noted his style had something in common with Kanye West and T.I. Journalists underlined the songs were eclectic, and each of them had the right place in the mixtape. The successful release and upcoming album inspired Travis to start his tour “Rodeo”: the musician gave about 20 concerts in American cities.

In 2015, the rapper had the first album released. Rodeo included both solo tracks and collaborations with globally famous artists: Kanye West, Justin Bieber, The Weeknd, and so on. The song “Antidote” proved to be a great hit: Billboard put it on the 16th position in the top 100 list; in Billboard 200, the album reached the third position.

The second album Birds in the Trap Sing McKnight topped the chart. The lyrics were more personal: Travis interpreted his experience and showed how hard it was to express oneself being in a social trap. The songs “Pick Up the Phone” and “Goosebumps” created with Kendrick Lamar became the hits.

Fashion designers are inspired by the rapper’s style: dreadlocks, dark T-shirts, and sneakers. In 2016, the man was invited to the photo session for the new clothesline by Alexander Wang. Soon, Scott announced on his Instagram he was going to present his own clothesline; the Australian brand Helmut Lang started supporting with him.

2017 was marked by the new tour and large projects with other musicians. Travis was a guest musician when Migos recorded their new album, collaborated with Nay, and released the single with Quavo and Lil Uzi Vert that became a soundtrack in The Fate of the Furious. Besides, Scott presented the new album Huncho Jack, Jack Huncho with one of the Migos members.

The rapper is single. The media reported he had love affairs with several women including Kendall Jenner and Rihanna. In 2017, the musician was said to date Kylie Jenner, and the couple visited social events. In February 2018, their daughter Stormi was born. The couple has not married officially yet.

Scott mentioned several times he was not doing drugs. In his interviews, he noted his imagination and energy were enough for him.

Sometimes, people mistake Scott for another rapper, ASAP Rocky; both men are irritated when it happens.

Travis Scott made amends with his parents and gave them a new house as a Christmas present in 2016. He personally managed the mansion finishing and furnishing; there was even a vending machine there.

According to Healthyceleb.сom, Scott’s height is 178 cm., and his weight is 67. Travis is a Taurus. The musician has his own Instagram and Twitter accounts where he regularly posts photos and publishes notes.

In 2018, the rapper’s third album was presented. The genre remained the same: hip-hop and trap.

Scott calls the new product the result of the golden mean between fans’ preferences and his own tastes. The musician emphasized AstroWorld was just his desire to be himself.

The first single “Watch” created with Kanye West and Lil Uzi Vert has been released. The tour in Europe, Canada, and the USA has been scheduled for summer and fall 2018. 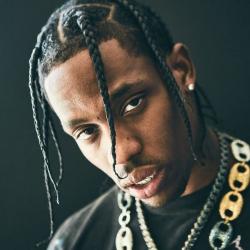