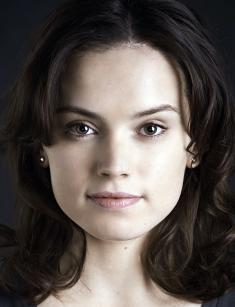 Daisy Ridley is a young Hollywood actress from Great Britain. The world got acquainted with her after she played the lead character in the seventh movie of the iconic franchise Star Wars. However, it was not the young woman’s first role: she had appeared in a dozen of other projects, voiced animated movies, and worked on music videos.

Daisy Ridley was born in Westminster, the historic area of London. The girl’s father, Christopher Ridley, was a professional photographer, and the mother, Louise Fawkner-Corbett, worked in a London bank. Daisy is the younger child in the family; she has two elder sisters, Kika-Rose and Poppy. Besides, the father had two daughters from the first marriage. There is another famous figure in Daisy’s family: her great-uncle Arnold Ridley was a famous actor who starred in the popular TV series Dad's Army.

Daisy did not attend an ordinary school: she was educated at Tring Park School for the Performing Arts in Hertfordshire. Before that, Ridley was a disobedient fidget, but she took an interest in dance and other arts at school; as a result, she became more disciplined. The young woman graduated in 2010 and traveled around the world for about two years. Finally, she decided to build an acting career.

Daisy Ridley debuted in 2013 and appeared in three sitcoms and several movies. She played in Casualty (“And the Walls Come Tumbling Down”), Youngers (“A to B and the Apology”), and Toast of London (“Vanity Project”). Besides, she participated in short movies: Lifesaver, Blue Season, 100% BEEF, and Crossed Wires. The first two projects were nominated for BAFTA.

The same year, the young woman worked on the music video “Lights On” by the rapper Wiley.

The next year brought two episodes of the detective series Silent Witness and one episode in the TV melodrama Mr. Selfridge. The actress took part in the British comedy The Inbetweeners 2, but all the scenes with her were deleted later. Soon, the youth horror Scrawl came out; the artist had one of the lead parts.

In spring 2014, the director J.J. Abrams who was working on Star Wars: The Force Awakens decided to take the same artistic step as George Lucas did and invited beginning actors to play the main characters. The big auditions were organized; Daisy Ridley succeeded and gained one of the central roles, Rey.

Daisy’s character provoked an outcry among fans. First of all, the audience emphasized that the protagonist was a woman: the first two trilogies showed men. Rey changed this tendency. Some people said that the female character “spoiled” their childhood memories while others were happy that justice was served and girls would have an excellent role model.

As the first part of the trilogy, Star Wars: The Force Awakens raised several questions about the character: who Ray’s parents were, whether she had the Force, and so on. The lack of information encouraged people to argue and suggest various theories.

Thanks to the project, the actress had four nominations for MTV Movie Awards 2016 and won Best Breakthrough Performance.

In 2015, Daisy voiced Hannah in the animated fantasy horror Scrawl by Peter Hearn.

Daisy Ridley is busy with TV projects and movies; she does not think about romances. According to the paparazzi, she either has dinner alone or with her female friends.

In summer 2016, Daisy Ridley deleted her Instagram page. Before that, the actress supported a social campaign against violence and gun violence. Instagram users and other people made many negative comments and accused Daisy of being sentimental and hypocritical.

According to such accusers, Daisy played the main character in the franchise where violence, fights, and arms were the primary means of problem-solving. The artist signed a contract for the new part of Star Wars where her character did not hesitate to use force; at the same time, she disapproved of violence in real life. Even Star Wars fans were outraged.

Daisy did not tolerate the flow of negative comments and deleted her account. Later, she restored it to thank those who supported her and deleted it again.

Nowadays, Daisy’s career is closely intertwined with Star Wars. The young woman voiced Rey in the animated series Star Wars Forces of Destiny that was premiered on July 3, 2017. The same year, Star Wars: The Last Jedi was released. It was the second part of the new trilogy.

There were some technical and ethic-related issues. As soon as fans learned the news about the death of Carrie Fisher on December 27, 2016, opinions were different. Some people expected Princess Leia to appear in the second and third parts of the story; others believed that Fisher’s character would not be shown.

The story is set right after the events of The Force Awakens. Rey is looking for the last surviving Jedi Luke (Mark Hamill) to learn how to control the Force and restore the balance and justice in the galaxy. The premiere took place on December 9, 2017.

Nowadays, Daisy Ridley has many new offers. In 2017, she participated in Kenneth Branagh’s Murder on the Orient Express based on Agatha Christie’s book under the same title. It is the story about the investigation of the famous Belgian detective Hercule Poirot. The actress got the role of Mary Debenham.

In 2018, Daisy voiced one of the characters in the animated family movie Peter Rabbit and played in the drama Ophelia that showed the events of the famous play Hamlet from Ophelia’s point of view.

Soon, the artist will appear as Violet in the fantastic movie Chaos Walking. Besides, she is to take part in the military drama A Woman of No Importance and the drama The Lost Wife.