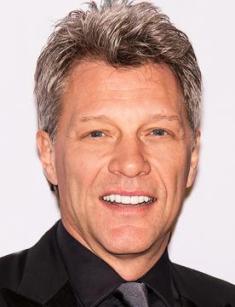 Jon Bon Jovi is the popular American musician and the leader of the group under the same name; he is the icon for several generations of rock music lovers. However, not all fans know that Jon Bon Jovi’s career is wider than music.

The would-be musician was born on March 2, 1962, Perth Amboy, New Jersey. The boy’s father, John Francis Bongiovi Sr., worked as a barber, and the mother, Carol, was a florist. Jon showed the interest in music early: he learned how to play the guitar and often performed with local bands.

The boy’s cousin liked Bon Jovi’s songs, and the young talent gained the chance to use the recording studio equipment with the relative’s approval. The song “Runaway” was the first song presented to the audience; it was even broadcast at local radio stations. It was pretty clear: Jon was not going to stop.

In 1983, the beginning musician took the first steps to real fame: he founded his own group and gave it his own name. There were six artists including Bon Jovi himself. The project turned out to be a success; the next year, the band signed a contract with Mercury. It was a miracle: many beginners dreamed of such a beneficial agreement. 1984 was marked with the first album, Bon Jovi.

The collection proved to be a great hit. The next year, the musicians recorded the next album, 7800° Fahrenheit, that broke many sale records and topped various music charts. Bon Jovi continued to work diligently and presented one album after another: Slippery When Wet (1986) and New Jersey (1988).

There was no doubt: the artists were stars. The group was frequently touring, and each show was a memorable and bright event. Bon Jovi’s music sounded on every radio station, and people all over the globe pinned their posters in their rooms.

Rumors had it the tremendous popularity and busy schedule almost made the group split up: the permanent stress and considerable pressure caused conflicts and chronic tiredness. Nevertheless, the musicians overcame the hardships and released the new album, Keep the Faith, in 1992. These Days followed three years later.

At the same time, Jon worked on his solo projects. Blaze of Glory and its main track brought the artist many prestigious awards. In 1997, the musician pleased his fans with Destination Anywhere that turned into a hit in the United States and abroad.

The next two years, the band members were relaxing and restoring their artistic power. People were patiently waiting for Bon Jovi’s comeback, and it was well worth it. The 2000 song “It’s My Life” from Crush blew music charts worldwide. Other works were equally popular: the song “Always” and Leonard Cohen’s “Hallelujah”; these music videos remain popular today.

A gifted person is good in any sphere, and Jon Bon Jovi’s example proves that. Apart from music, the artist is known for his contribution to cinematography. In 1987, the man had a minor role in The Return of Bruno; in 1990, he appeared in several episodes of Young Guns II. They were so small that Jon’s name was not even credited. Still, it was the beginning of the movie career.

In 1995, the actor collaborated with Gwyneth Paltrow and Whoopi Goldberg in Moonlight and Valentino.

The next year, Jon appeared in the drama The Leading Man and the short movie for the solo album Destination Anywhere. Soon, No Looking Back (1997) and Homegrown (1998) were released.

The same year, Pay It Forward was released. It is a touching story about a little boy who is going to make the world a better place. This seemingly impossible task does not require special endeavor: one should just take the first step.

Fahrenheit 9/11, Cry Wolf, National Lampoon's Pucked, Sex and the City, and MVP: Most Valuable Primate are among the actor’s works.

Unlike the majority of his colleagues, Bon Jovi is an exemplary family man. The tall (5.74 feet or 175 cm.) and handsome blond has always been loved by fans, but he turned out to be a one-partner person: in 1989, he married his school girlfriend, Dorothea Hurley. She is an outstanding woman involved in mixed martial arts; she has a black belt in karate.

The lovers married spontaneously: they went for a walk in Los Angeles and did it. Their life has been happy, although some disagreement took place. The song “Janie” was created at one of such moments; fans loved it.

The spouses have four children. The first daughter, Stephanie Rose, was born in 1993; the first son, Jesse, was born two years later. The parents welcomed the youngest boys, Jacob Hurley and Romeo Jon, in 2002 and 2004 correspondingly.

2013 was challenging for Jon: Richie Sambora left the group before a large international tour. The musician mentioned in his interviews it was difficult for him, and he would hardly have managed to go through it without her support.

The obstacle was overcome. Today, Job Bon Jovi continues to give concerts, create music, and act in movies. 2016 was marked with the album This House Is Not for Sale. Fans are looking forward to new hits and videos of their favorite.

The man is actively engaged in charity: Bon Jovi Soul Foundation helps disadvantaged people. The musician spends his own finances on building houses for those in need. Besides, the artist opened a restaurant where visitors could pay with some work, not money.