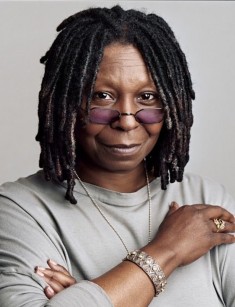 Whoopi Goldberg is a Hollywood superstar: judging by the list of masterpieces where she appeared, one can hardly disagree with it. Whoopi has also won four main prizes: The Academy Award, Grammy, Emmy, and Tony Awards. Besides, she has been awarded two Golden Globes and BAFTA; finally, she can boast a star in the Hollywood Walk of Fame.

Caryn Elaine Johnson was born in New York and grew up in the emigrants’ neighborhood, Chelsea. The family was poor: the mother used to be a nurse and later got hired as a teacher; the father was a priest.

The actress’s pseudonym derived from her childhood’s nickname “whoopee cushion.” When Johnson needed a stage name, she remembered about it; the mother gave the idea to add the pompous second name “Goldberg” to the funny “Whoopi.” She joked that “Johnson” was not Jewish enough for the star.

As a child, the girl quitted school: she was diagnosed with dyslexia and could not read and write. However, Whoopi did not fight the problem hard: she was fond of the hippie movement and left the house.

Caryn revealed her acting talents at eight when she joined Helen Rubenstein Children's Theater. Soon, the black girl was given significant roles; she looked marvelous on the stage. However, when Johnson left the house and joined a hippie commune, she had to think how to earn her living, not how to perform. She worked as a watcher, took a part-time job at construction, and put on makeup on dead people. For a while, the unemployment compensation helped her. There was another problem: Whoopi smoked marihuana and began to take heavy drugs.

Alvin Martin, an activist from an anti-drug organization, rescued the future star: he brought the woman from the brink of death and married her. Soon, the couple’s daughter Alexandrea was born. Whoopi’s life turned in the right direction. In 1974, 19-year-old Whoopi finally got hired at a theater, but Martin refused to leave for New York. The couple broke up.

Whoopi Goldberg’s brilliant career began at the West Coast of the United States. Initially, she played in several amateurish troupes. When the actress received two roles in Mother Courage, she got a break-through idea: she could play in her own one-woman show. Thus, The Spook Show appeared. The artist masterfully personified a beggar and a millionaire.

Goldberg had a successful tour with her show in America, Canada, and Europe. In 1984, Mike Nicholls noticed her talent and helped the woman to perform at Broadway. Soon, the actress was invited to the musical Jesus Christ Superstar and several less significant projects.

Whoopi Goldberg earned the tremendous fame in 1985 when she turned 30. She heard that Steven Spielberg was going to adapt Alice Walker’s epic novel The Color Purple to the screen. The artist asked the writer to give her a role there and sent her a latter. Walker, who had seen Goldberg perform at the Broadway, asked the director to pay attention to the actress. Spielberg invited Whoopi Goldberg to the auditions and gave her the lead role.

This project brought Whoopi the nomination for the Academy Award and the Golden Globe.

Whoopi Goldberg was good at everything: comedies, fantastic movies, detectives, dramas. Fans adored all images of their favorite actress. The dramas Ghosts of Mississippi, The Long Walk Home, Homer and Eddie are the recognized masterpieces of the world’s cinematography.

1991 brought the artist the Academy Award, the Golden Globe, and BAFTA; she won them for the role of the psychic in Ghost. It is peculiar that another actress should have play Oda Mae Brown, but Patrick Swayze, Goldberg’s fan, persuaded the movie makers to chose Whoopi.

The next year, the artist’s work was marked in Cannes: the movies Sarafina! and Robert Altman’s The Player were highly appreciated.

Whoopi Goldberg is known as a talented TV presenter: she can keep the audience interested. The woman worked on the entertaining show Comic Relief for several years. Since 1994, when the star was the host of the Academy Awards ceremony, she has been regularly invited to such events.

Whoopi tried herself as a voicing actress: she gave her voice to the characters of Lion King, Rudolph the Red-Nosed Reindeer: The Movie, The Rugrats Movie, My Fair Madeline, Pinocchio 3000, The Lion King 1½, Racing Stripes, Everyone's Hero, and Doogal.

In 1998, the family comedy A Knight in Camelot was released. Whoopi played the main character, the computer genius Dr. Vivien Morgan, who suddenly founds herself in medieval England. She prefers action to inaction and starts introducing the new order in the palace. However, Vivien’s interruption leads to some unexpected consequences.

Soon, the fantasy comedy The Magical Legend of the Leprechauns with the actress came out.

In the 2000s, the actress was actively engaged in movies: Rat Race, For Colored Girls, If I Had Known I Was a Genius, Teenage Mutant Ninja Turtles, and so on.

Although the actress does not meet the common beauty standards, her personal life has been rich in events. She has been married three times. Alvin Martin was her first husband. For the second time, Goldberg married the photographer David Claessen; they spent two years together. The marriage with the third husband, the businessman Michelle Trachtenberg, lasted for a year.

Rumors had it that Whoopi Goldberg had affairs with Frank Langella, Ted Danson, Timothy Dalton, and Eddie Gold. Many handsome stars fell in love with the woman. There were speculations that the actress was gay, but she rejected them.

Whoopi does not hesitate to use the strong language; she is considered one of the rudest actresses in Hollywood.

The actress collects plastic bijouterie; she was wearing it during ceremonies including the Academy Award. Some people accused Whoopi of lack of taste.

Goldberg is famous for her active civic participation: she fights against hypocrisy and supports LGBT people and racial and cultural equality.

In 1998, Whoopi presented her text Book and laughed at the hypocrisy of the modern society.

In September 2017, the actress played in the catastrophe movie 9/11 about the terrorist attacks in New York on September 11. She got the role of a security agent who tried to help people stuck in the elevator before the tower collapsed.

At the same period, Whoopi Goldberg appeared in the short movies Palace and Happy Birthday to Me.

In March 2018, the audience had the chance to see their favorite actress in the TV series Instinct; she had a small but bright role. Not long before the series, Goldberg starred in the comedy Furlough.

Nowadays, the artist is working on the comedy I Do, I Do. It is the story of two men, Blake and Daniel, who decide to get married. Suddenly, this news appears in the morning TV show; the couple becomes the example for gay people. 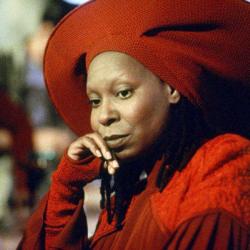