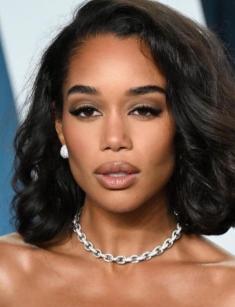 Laura Harrier is a famous American actress and model. If you've watched the Spider-Man: Homecoming movie with Tom Holland, Laura Harrier's face should look familiar to you. She landed the role of Liz Allan, whom Spiderman was romantically interested in.

Laura was born on 28 March 1990 in Chicago, Illinois. She grew up in Evanston in the same state and then relocated to New York.

Her mom's name is Linda, she's a speech pathologist of Polish-English origin. Her dad's name is Temujin, he's an insurance activist of African-American descent. The star has a younger brother named William.

In school, this girl used to take part in sports activities. She attended acting and drama classes to overcome shyness and gain confidence. She graduated in 2018. In the university, Laura specialized in art history. Besides, she began to take modeling lessons. A location scout discovered her (it was her mom's friend). After graduation, she completed a two-year acting course.

When the future star was a young kid, she suffered from a speaking disorder. She got rid of it thanks to her mom by the age of three.

She's a vegetarian. She regularly raises awareness about equality and civil rights.

Before Laura's acting career took off, she made a name for herself as an international model. She was signed for IMG Models and Wilhelmina Models. Steve Madden, Louis Vuitton, Bulgari, Calvin Klein, Boss, Marc Jacobs, Urban Outfitters, American Eagle, Target and L'Oreal are just a few examples of top brands that collaborated with her. This lady was appointed the official face for Garnier. You might have seen her photos in such high-profile publications as Glamour, Elle, Vogue and Cosmopolitan.

At some point, Laura realized that her modeling career failed to make her feel fulfilled. She enjoyed performing in commercials and student movies, so she decided to try her hand at acting. After completing the courses, she wasn't thinking of becoming a popular mainstream actress. She was sure she would be starring in "some weird theater", not even on Broadway.

She debuted on the screen in 2013, in the web series reboot of the One Life to Live soap opera. Her character's name was Destiny Evans.

In 2014, the star began to date Gabriel Florenz. They went to India on holiday together.

In 2018, Laura was rumored to have a brief affair with Justin Theroux. It lasted for a few weeks only.

The same year, Klay Thompson, an NBA player, became her boyfriend. The next year, they appeared together on the Oscars red carpet but split up soon.

Since 2021, she's been together with Sam Jarou, a fashion consultant.

In 2019, her role in BlacKkKlansman brought her two nominations: