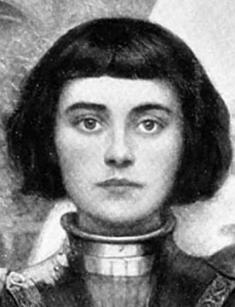 Five hundred eighty-eight years have passed since the death of the famous Maid of Orleans. The incredible life of Joan of Arc haunts historians. Numerous books, research papers, movies, plays, and paintings were dedicated to this legendary liberator of France. There is no city in France without some monument, street, or a museum created in honor of Joan of Arc. The phenomenon of the high praise and adoration for Joan of Arc lies in her unique biography; she became the commander-in-chief of France at the age of 17.

She is the only victim of the Catholic Church, who was not only redeemed after death but also beatified. Selfless devotion to the people, courage, and perseverance of the Maid of Orleans made her a symbol of France. A bright flash of medieval history, Joan of Arc left an indelible mark on the history of humankind.

Joan of Arc, known as Jeanette in her childhood, was born on January 6, 1412, in Domrémy, Duchy of Bar, Kingdom of France. Jeanne's father was Jacques d'Arc, and her mother was Isabelle Romée. Numerous researchers of Joan's biography cannot provide the readers with information about the origin of her family. According to information left by a descendant of Jacques d'Arc, Charles du Lys, Jacques married Isabelle and moved to Domrémy from Moulins-Sur-Céphons, grew bread and had 20 acres of land, cows, sheep, and horses.

Joan is the eldest of d'Arc's children. Joan had three brothers, Jacquemin, Jean, and Pierre. Her only sister, Catherine, died in her youth. The brothers became Joan's companions and support in her future. Joan never called herself Joan of Arc, even as a child, the Maid of Orleans gave herself the name "Joan the virgin."

The first vision came to Joan at the age of 13. The girl saw Archangel Michael, the great martyrs Catherine of Alexandria and Margaret of Antioch. In the visions, God directed Joan to go to Orleans as the leader of the troops and lift the siege, lead Charles to the throne, and clear France of the English occupation. Probably, the imagination of the girl was influenced by prophecies of the Merlin magician at the court of King Arthur, who predicted that the Maiden would save France.

At that time, the country was torn apart by the Hundred Years' war. The English occupied part of France, and part was raided and plundered. Isabeau of Bavaria, wife of the half-witted King Charles VI, signed a treaty with the English in 1420. According to it, after the death of Charles VI, the power passed not to Charles' son, but Henry V, King of England. The exhausted people and the defeated army waited for a miracle, a savior.

In January 1429, Joan of Arc ran away from home and went to Vaucouleurs. Meeting with the captain of the city, Robert de Baudricourt, announced his intention to meet with the Dauphin. The girl was not taken seriously and sent home. Returning to Vaucouleurs a year later, Joan shocked the captain by predicting a French defeat at the battle of Rouvray, news of which came much later than the visions.

Impressed, Robert de Baudricourt sent Joan of Arc to court with a man's vestments, a letter to the Dauphin, and a group of soldiers to assist him. On her path, the young woman was accompanied by her brothers. The way to the court of Charles was hazardous. As Jeanne herself said, the Archangel Michael helped the travelers on the road.

The moment of meeting of Joan and Charles was poetically described in many works. Carl hesitated for a long time. The court was divided into two camps, many dissuading the Dauphin from meeting the shepherdess of Lorraine. The clergy believed that the devil led the Maid of Orleans. Having consented to an audience, Charles placed a page on the throne in his stead. Joan, entering the hall, did not look at the throne, but went to Charles, who was standing among the courtiers.

As the virgin later said, the Archangel Michael pointed out Charles to her. After the dialogue between Joan and Charles alone, the future king looked enlightened. Charles revealed the essence of the conversation only a quarter of a century later, Joan dispelled doubts of the Dauphin about the legitimacy of his power. Joan assured the future sovereign that the throne belonged to him by right.

So, Charles believed the Maid. But his opinion did not decide everything; the priests had the last word. The ecclesiastics gave Joan a tiresome trial. Thanks to sincerity and purity of thought, having passed all the tests and interrogations of the Commission at Poitiers, Joan was admitted to the army. The brave military career of the Maid of Orleans began. Joan of Arc came from Poitiers to Tours. After receiving equipment and a horse in Tours, the Maiden went to the city of Blois, the starting point on the way to Orleans.

In Blois there was a challenging event, Joan of Arc pointed out the church of Sainte-Catherine-de-Fierbois, which kept the sword of king Charles Martel. With this sword, the king defeated the Saracens at the battle of Poitiers in 732. The sword helped the virgin in battle. The news of the advent of the Savior flew around France. People gathered under the leadership of Joan of Arc. Chaos and despair in the ranks of the troops came to an end; the soldiers cheered up and believed that the Maid of Orleans would lead to victory.

Jeanne stood in the head of the army in shining armor, with an ancient sword and banner. What strikes historians the most is that the illiterate shepherdess from Lorraine in the shortest possible time managed to master the tricks of military science, to restore order in the demoralized troops, to earn respect among military commanders. It remains to wonder how the 17-year-old simpleton revealed her remarkable talent of the commander. Joan herself repeated that God led her.

The first step in Joan's struggle against the English was the lifting of the siege of Orleans. Orleans was the only outpost on the way of the British troops to the complete capture of France, so the liberation of the city was a priority for Joan of Arc. On April 28, 1429, French forces led by a young commander marched to Orleans. An army of six thousand French met them. The virgin invited the captains of her army to approach the main gate of Orleans and attack the enemy's troops.

But the commanders disobeyed the order, led the troops to the besieged Orleans, and stood on the Left Bank of the Loire, opposite the forces of the enemy. Both bridges to Orleans were surrounded by the British. Crossing by swimming at gunpoint of the enemy is a dangerous business. The situation was hopeless. Joan was furious. She had to send troops back to Blois and to direct them to the right bank of the Loire. Joan herself with a small squad swam into the South part of the Orleans and entered the city through the Burgundian gate. The townspeople were running around in joy.

The battle of Orleans ended in a triumphant victory for Joan of Arc. The Maid participated personally in lifting the siege of the fortresses of Saint-Loup, Augustin, and Tourelle. She was wounded in the shoulder during the attack on Tourelle. On May 8, 1429, the English abandoned the approaches to Orleans and fled in disgrace. The city was declared saved. The victory of the French had a psychological significance — the country finally believed in its strength. After the victory at Orleans, the young commander-in-chief was given the nickname The Maid of Orleans.

After celebrating the victory in Orleans, Joan of Arc went to Tour to Charles, to announce the success. The way to the Dauphin passed through crowds of grateful Frenchmen. Everyone wanted to touch the armor of the Maid of Orleans. The churches held solemn prayers in honor of the Savior. Charles met the young commander-in-chief with honors, he seated next to her like a Queen, granted her a title of nobility.

The next task for the Maid of Orleans was the liberation of Reims. It was there that all the rulers of France were crowned. Unprecedented patriotic sentiments of the population allowed to collect about 12 thousand soldiers of the national liberation army. The wave of liberation movement swept France. Charles doubted the success of the March to Rheims until the last moment. However, the prediction of the virgin came true; the troops bloodlessly marched to the walls of the city for two and a half weeks. The coronation of Charles took place in a fabulous location. The Dauphin was crowned in the Reims Cathedral. Joan of Arc stood next to the king with a banner, in the armor of a knight.

With the coronation of Charles, the mission of the Maid of Orleans ended. Joan asked the king to let her go to her native village. Charles personally asked her to stay with him as commander-in-chief. Joan agreed. The ruling elite of France, led by La Tremouille, who received income from the war and concluded a truce with the Duke of Burgundy, persuaded Charles to delay the liberation of Paris. Joan of Arc attempted an independent attack.

On May 23, 1430, Joan was captured by the Burgundian forces. She was held prisoner by the Burgundian commander in Picardy, Jean of Luxembourg. He did not intend to give the Maiden to the English but asked for a ransom from Charles. The king betrayed the one who put him on the throne without showing interest. The tacit refusal of the French is considered the first betrayal in the history of the country.

The trial of Joan of Arc was held in Rouen. The English needed not only to kill the Maid of Orleans but to blacken her name. Therefore, Joan had to confirm the connection with the devil before being executed by the sentence of the Tribunal. To do this, the most sophisticated person was invited to Church judgment. It was Pierre Cauchon, the former Bishop of Beauvais. For the successful massacre of the Maid, the English promised Cauchon the miter of the Archbishop of Rouen.

From December 1431, Joan was detained at Rouen, a place belonging to the English in the land of France. There was a trial. To sentence the virgin to death was not enough; they had to prove the connection with the devil. The defendant helped to achieve this herself, explaining her actions with having supernatural powers. Neither the king nor the rescued Orleans, nor his comrades-in-arms came to her rescue. The only one who rushed to the aid of Joan of Arc was the knight Gilles de Rais, later executed.

At the cemetery of the Saint-Ouen Abbey Church, Joan signed a paper pleading guilty with a connection with the devil. The judges extracted the confession by deception, reading another document. The forgery was revealed later, in the process of Joan's absolution. The verdict of the Tribunal was as follows: "Execution by burning alive." At the time of her death, Joan was calm and confident. The "voices" promised the Maid of Orleans salvation in May 1431.

The absolution of Joan of Arc came 25 years later, after the liberation of France from the English occupation.

Joan of Arc's personal life is devoid of passion. Having joined the army as a 16-year-old virgin, the Maid of Orleans died in a fire at 19.

Today, the memory of the virgin of Orleans is immortalized in monuments, movies, and books. The Catholic Church celebrates Saint Joan of Arc Day every year on May 30. The French celebrate Joan of Arc Day on May 8 every year. In Paris, at the site of Joan's injury, there is a monument to the virgin on a horse in gold. One hundred paintings were created in honor of the Maid of Orleans.