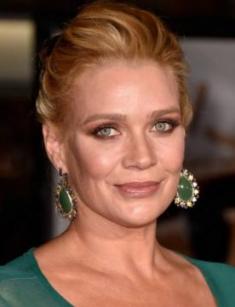 Laurie Holden is an American actress who became famous all over the world for the role of Andrea in The Walking Dead. She also played a lot of characters in other HBO and Showtime series. Fans of the horror genre remember her as a brave policewoman Cybil Bennett, who along with the main character set off in search of a missing child in the mysterious Silent Hill.

Heather Laurie Holden was born in Los Angeles on December 17, 1969. Her parents, Glen Corbett and Adrianne Ellis filed for divorce when the daughter was five years old. Later her mother married director Michael Anderson. Laurie continued to communicate with her father, so she spent her childhood between two cities - Toronto and Los Angeles.

In her youth, she got a chance to try herself as a model. Although Holden was not high enough (Laurie's height is – 5 feet 54 inches at a weight of 116 pounds), she has achieved considerable success. She took the first prize in the profile competition Look of the Year in Toronto.

After school, she enrolled at McGill University, in Montreal, to study philosophy and economics, but a year later decided to move to California to do theater. Her teacher was the famous American theater, film and television actor Robert Reed.

The girl said goodbye to the modeling career right after she graduated from high school. She was more interested in an acting career. While studying at the University of California, Laurie was considered a promising student and even received the Natalie Wood Award, designed for talented young actors. Her education did not end there: after graduation, she began studying human rights at Columbia University and even received a degree.

For the first time, the girl's acting talent was demonstrated to the world by her stepfather Michael Anderson. He shot her in the mini television series The Martian Chronicles released in 1980. Before that, she had small roles in TV shows and movies, but this one brought her success.

Holden began her professional acting career in Hollywood and later started acting in Toronto at the same time. Until the early 2000-is, she mainly got roles in soap operas, television shows, and independent films. In 1986 she played in the сomedy movie Separate Vacations as well as the mystical television series Father Dowling Mysteries and Captain Power and the Soldiers of the Future.

In 1990, Laurie took part in the filming of the movie Young Catherine. The historical drama movie about the fate of Catherine II, told by American filmmakers, turned out spectacular and exciting, though not very accurate. She was nominated for an Emmy twice, including the nomination for best costumes, created by Russian artists. Holden played the role of Princess Catherine Dashkova.

In 1996, Laurie was nominated for Gemini, a prestigious Canadian Film Award, another version of Emmy. Film critics noted her role in the television series Due South. In the same year, the actress was invited to the filming of The X-Files. Her character is the UN Secretary-General Marita Covarrubias. Even though it is a cameo role, the girl appeared in several series right until 2002.

Laurie received her first significant role in 2001; it was the movie The Majestic, directed by Frank Darabont. Her acting duo with Jim Carrey turned out to be successful, and the audience liked it, but the motion picture failed at the box office. The audience and critics did not find anything remarkable in it – except for their acting.

Three years later, Holden played another leading role of a single mother in the Canadian drama movie Bailey's Billion$, and then she appeared in the Fantastic Four.

In 2006, director Christophe Gans, working on a new movie Silent Hill, was looking for actresses for the role of a female police officer and remembered the brilliant work of Laurie in The Majestic. She played Cybil Bennett very convincing, and the film became a hit and a recognized classic of horror. So it was not surprising that after some time, she again received an invitation to take part in the horror movie The Mist based on the novel by Stephen King.

In 2010, the actress participated in the film adaptation of the Walking Dead comic book. It became one more bright moment in her creative biography. The role of Andrea, a lawyer by profession and an ardent feminist, made her a favorite of the viewers. The television show itself became the best drama series of the year, and its audience grew each season.

Holden starred in three seasons and then left the project due to the script. In an interview, she revealed that she had signed a contract for eight years and was supposed to be in the show till the final season. Then the developer of the series, Frank Darabont, suddenly changed his mind and rewrote the script.

According to Laurie, she took it badly and could hardly hide tears on the last days of the shoot.

After that, the filmography of the actress was enriched with the role of the villain in Dumb and Dumber To, as well as in several episodes of Major Crimes. She was supposed to take part in television series airing on NBC Channel, Chicago Fire, but then decided to leave the project after the pilot episode. The reasons for this action were not revealed, but according to rumors, they were personal.

The actress prefers to keep the information about her love life private. It is known that Laurie has no husband nor children, and she has not yet walked down the aisle with anyone. There were rumors that on the set of The Walking Dead, she had an affair with the screen partner Norman Reedus, but their relationship was short-lived.

Besides her work in the cinema, Laurie devotes her time to charity projects. She is a member of the board of several foundations, in particular, Home From Home, which helps children. She has also taken part in humanitarian missions and supported organizations fighting against sexual slavery.

Laurie Holden has a net worth of $3 million. The actress continues to star a lot, both in Hollywood and in Canadian film studios. Her last significant work was the movie Dragged Across Concrete, released in 2018.

This is a thriller film about two former police officers, who after retirement decided to do underground work. Laurie played the wife of the central character.

Also, now Holden is acting in the sequel of the series The Americans.