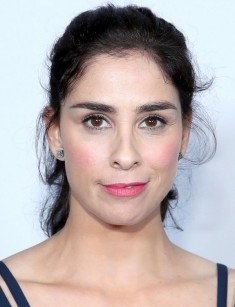 Sarah Silverman is a popular American comic artist who works in the genre of stand-up and specializes in black humor and satire. The artist had become popular after the participation in the show Saturday Night Live. The girl who calls herself a Jewish comedian and performs under the name of Big S doesn’t hesitate to joke on the most inconvenient topics – from sex and religion to the policy and the Holocaust.

Sarah Kate Silverman was born in Bedford on the 1st of December, 1970 in the Jewish family. She was the youngest of four children, and her elder sisters were babysitting with her with great pleasure. Her parents were successful and rich people – her father Donald was the owner of the discount clothing store, and her mother Beth worked as a photographer in the political sphere and gave classes at the theatrical courses.

After the termination of the high school in New Hampshire Sarah entered New York University, but as a result, she hasn't received the higher education. Since childhood, the girl enjoyed to be in the center of attention and liked the theater that's why she began to appear on the stage at the age of twelve. At the age of fifteen, she took part in the shootings for Community talk show.

Two years later Sarah had her debut in the comedy; however, later she told that her first experience was awful. In the beginning, Silverman performed at Boston's restaurants, and except for reading monologues, she performed as a singer. The girl wrote the texts for the performances herself. The Saturday Night Live talk show became the turning point of her creative career. However, she spent her only a year and then Sarah was fired. At first, Silverman was upset about it, but then she made a joke of it.

In a short time after the young actress appeared on TV, she was noticed and was invited to take part in the movies. She took part in the series Seinfeld and Star Trek; she performed the role in The School of Rock, Naked Truth, the drama Take This Waltz. As a performer of comic monologues, Sarah took part in Mr. Show sketch show.

Due to her bright appearance and ability to present herself on the stage, she began to be invited to take part in the shows and concerts as a host. In 2006 Silverman hosted the MTV Movie Awards ceremony, and her photos appeared on the cover of Maxim magazine which included her name in the list of 100 Hottest Women.

In 2008 Sarah appeared on the shooting of the program Jimmy Kimmel Live! Where she performed scandalous composition "I'm Fucking Matt Damon." At that time Jimmy was her boyfriend, and in this song, she publicly confessed that she betrayed him with the actor. This video at once became a sensation on YouTube, and the composition received Creative Arts Emmy Awards.

Silverman is also known as a voice-over actress. She has voiced-over the characters of Futurama, American Dad!, The Simpsons, Wreck-It Ralph. In 2017 she recorded the special release "A Speck of Dust" which contained best jokes on different subjects for Netflix channel.

The main Sarah’s stage personage is a Jewish-American lady from high society who mocks at stereotypes and fanaticism. Her sketches repeatedly aroused protests of the religious and public organizations who consider themselves to be the defenders of morals. Though, their criticism hasn’t confused the witty girl. In her young years she gave preference to political themes, but with time she began to choose religious topics.

In 2017 Silverman appeared in the scandal connected with the conviction of her old friend Louis Xi Kay of sexual harassment. In the release of I Love You, America show she appeared with the criticism of the TV host and told that she had noticed his inappropriate behavior earlier, but didn’t know what do to do with this.

"I could oppose to this fact some nice stories about our friendship and his great qualities of the father, but it's absolutely inappropriate … Louis has done this all. These charges are truthful".

Though Sarah has always been in the center of attention and never lacked men's attention, she hasn't got married yet. During seven the actress was meeting Jimmy Kimmel. Their relationship was passionate, they separated and reunited again until 2014 when they finally broke up.

In a short time after this Sarah began to have relations with the actor Michael Sheen, but in 2018 they announced their parting. On Twitter, the actress explained that long separations became the reasons for their break up as this influenced their personal life badly. At present Silverman has settled in the USA, and Sheen lives in Great Britain, and with time it became unbearable for both of them to see each other so seldom.

By the words of Sarah, she doesn't dream of getting married and having children. Since young years the artist has had depression, and she is afraid of the fact that her children can inherit the predisposition to this state. She has to get treatment with serious medicine which causes addiction. Moreover, in one of the interviews, Sarah has confessed that since childhood she has suffered from enuresis. She doesn't hesitate to joke about her disease but still takes efforts to recover.

Silverman doesn’t drink alcohol as she feels sick of most alcoholic drinks. What about bad habits, she only smokes. Sometimes, during the shootings, she uses marijuana to relax. Since the age of ten, the girl doesn't eat meat. She admits that even though she considers herself to belong to Jewish culture, she isn't religious and doesn't share many values of this community.

Sarah Silverman is registered on many social networks and often communicates with her fans with the help of them.

In January 2018 the fans were touched by the story connected with the artist's Twitter. In the comments to Sarah's post, one of the participants left rough comments about Sarah. Answering to this person, the artist felt sorry for this man and even managed to cause a frank conversation instead of banning this rude man. Soon the young man apologized for Sarah and shared his health problems, and the artist in her turn asked her subscribers to help him with the search of the doctor and even organized a fund-raising for his treatment.

In 2018 the artist took part in the voice-over of the animated series Ralph Breaks the Internet. The beginning of the year was also marked for Sarah by one more scandal. That time it was made intentionally. On Instagram, Sarah has published the photo of her nineteen-year-old nephew Adar in the military uniform who serves in the ranks of Israel Defense Forces and congratulated him with his birthday.

The picture of the young man with this innocent comment aroused the flow of aggressive comments from the Arabs who called Adar "the assassin of the Palestinian babies." Silverman reacted at the event philosophically – during her career, she often got in similar situations, and she already knows how to cope with inadequate reactions. 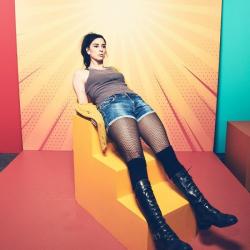