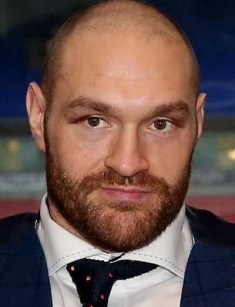 Tyson Fury, whose nickname is Gypsy King, is an Irish-English boxer, one of the brightest and eccentric athletes today. He stands out not only for his original techniques and heavily built body but also violent and uncontrollable temper. By 2018, he has had 30 victories in 34 matches and 26 knockouts. Other four fights ended in a draw: the athlete has never been defeated.

Tyson Luke Fury’s father nicknamed Gypsy was a famous boxer in the 1980s. He named his son after his favorite boxer, Mike Tyson.

The boy discovered the interest in martial arts early; he was trained by his uncle Peter who had the experience of work with athletes. Tyson inherited his father’s talent. The young man could boast an impressive list of victories; he fought for English and Irish fight clubs.

Although Fury represented Ireland on international competitions three times, he was not included in the Olympic national team. After a fight for Holy Family Boxing Club, he was deprived of the right to present Ireland. Thus, the young sportsman became a constant member of the England national team. In 2006, Tyson became number three at the international junior championship; the next year, he won the EU Junior Championship and gained the ABA title.

In 2008, the boxer took up the professional sport; he debuted in Mick Hennessy’s promotion company. The first fight against Bela Gyongyosi brought the victory; the next month, the athlete stood against Marcel Zeller. Despite his considerable experience, the German got through three rounds and submitted.

In was Tyson Fury to whom Marcelo Luis Nascimento lost for the first time in his career. This bright knockdown victory in the fifth round gave Fury the opportunity to become the champion of Great Britain.

In 2011, another athlete who had always crushed his rivals faced Tyson: the super-heavyweight boxer Dereck Chisora. Before the fight, the majority of critics and fans expected Chisora to win. Still, it turned out that Tyson was a dangerous enemy for him.

Huge Chisora could not catch up with his light and mobile opponent. Although his powerful hits reached Fury and almost knocked him out of action, by the sixth round, Tyson’s speed and stamina helped him win the victory. In 2014, Chisora tried to even the score, but Fury’s experience led to his dominance. The athletes were fighting for ten rounds; later, a referee stopped the fight and awarded the victory to Tyson.

The first fight against Chisora made Tyson Fury the EBU champion; he got the right to try for the champion of the world title, but a series of rough events followed. Because of traumas, he had to cancel the scheduled fight against David Haye. The battle against Alexander Ustinov did not happen as well: Tyson was hospitalized before it.

In 2015, the brightest fight in Fury’s career took place. Wladimir Klitschko who had gained many titles became his opponent. The boxers had a similar efficiency, and the audience was looking forward to their contest. From the first rounds, it was evident that Klitschko’s strategy was wrong: he followed his habit and tried to keep Fury at a distance. However, the tall athlete (the man’s height is 206 cm.) with the impressive arm span (216 cm.) suddenly started using side blows.

Tyson won after the 12th round; the former champion Klitschko was dethroned. Further on, Wladimir called for the rematch, but the fight was always falling through. Eventually, in 2016, Tyson vacated his titles and left boxing; Klitschko never took revenge.

In 2008, the boxer married his old friend Paris. The couple met when they were 16. Similar to Tyson, the woman has some Gypsy roots.

Although Paris was close to Fury from their youth, the athlete did not ignore other women. In his interviews, he confessed he was a “liar” and “cheater”; he had been with many women and felt sorry for that.

He admitted: “I'm not a religious person, but I like to help people and do good things.”

The couple has two children: the son Prince and the daughter Venezuela. Tyson often says he will do everything to see his son continue the family tradition and become a boxer. At the same time, the man wants his son to remember about studies; in his youth, Fury received little education.

Tyson is known as an ambitious and rough person. Similar to Muhammad Ali, he does not hesitate to use swear words and praise his skills. After Fury said inappropriate things about his opponent on social networks, the fine of $3 000 was imposed on him. Still, the athlete’s behavior did not improve. This manner attracts the attention of fans all over the world; Gypsy King loves to be famous.

The decision to leave the professional boxing in 2016 was more about the club administration desire to get rid of the ungovernable champion and less about the sportsman’s tiredness. Fury publicly announced he wanted doping to be legalized. After the fight against Klitschko, the traces of performance-enhancing substances were found in his blood sample. Besides, Tyson confessed he used cocaine because of his mental disorder and weak health; he did not wait for the corresponding sanctions and vacated his sports titles voluntarily.

In 2018, the athlete announced his come-back to the professional boxing; he expressed his desire to fight the Albanian boxer Sefer Seferi. BBBofC was not happy to hear the news but allowed the sportsmen to compete.

Tyson organized his come-back in his style: before the fight, he asked his fans to help him choose the shorts and posted three options on his Instagram. During the weigh-in, there was no traditional exchange of looks: instead, Fury caught the Albanian in his arms and kissed him before the fight.

By the moment of the fight, Tyson’s weight was 125 kg., and his opponent’s weight was only 95 kg. Eventually, Sefer Seferi was fighting for four rounds and refused to participate in the fifth one. Fury said he could have knocked him down in the first ten seconds, but he wanted to enjoy fighting because he had not appeared on the ring for a long time.

The fight Deontay Wilder vs. Tyson Fury is one of the upcoming events of 2018; both athletes have signed the contract. 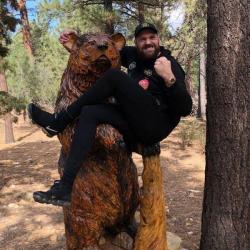