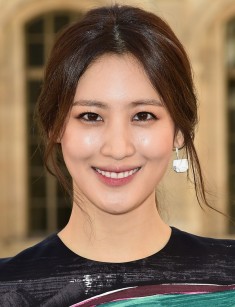 The Asian appearance is not very demanded in Hollywood cinematography and except for Lucy Liu who is an American actress with the Taiwan roots who has become world popular due to her role in the fighter of Charlie’s Angels. But at present in the high grossing movies there began to appear the young Korean actress Claudia Kim: she took part in The Avengers, The Dark Tower, Fantastic Beasts and Where to Find Them and she isn't going to stop at the achieved success.

Claudia Kim ( the real name is Kim Soo-hyun) was born on the 25th of January, 1985 in Seoul, in the Korean Republic. There are a lot of gaps in the information on the actress's biography. At the age of five, her family relocated to New Jersey because Kim's father was offered a job in the American department of the Korean company. Here the girl learned English, and later in the interview, she admitted that this helped her to adapt to the Hollywood world more quickly.

Since early childhood, Kim began to have a love for art. Her father in his free time from the official job was painting skillfully. Every week he brought to his daughter the books about the world-famous artists, movie, CDs with foreign music. However, the parents didn't allow their daughter to connect her life with the creative career.

"At that time Koreans were conservative, focused on the receiving the academic education that’s why I studied hard. When I grew older and began to be engaged in the model business. At first, her parents were against, but at present, they support me parents at first protested, but now very much support me", - admitted Claudia in one of the interviews.

Kim has graduated from the faculty of the international researches of Ewha Womans University in Seoul.

In 2003 the American Guess brand organized the audition in Korea looking for the model for their new collection. Kim participated in it "just for pleasure," however the designers saw the talent in the girl and offered her to become their constant model.

She had ideal parameters — with the height of 177 cm she weighs 53 kilos. The girl refused the offer: she had to prepare for her final examinations. In 2005 there was held the first competition Korea-China Supermodel.

"I thought: the international contest, why not taking a try?", - Kim shared her memories later.

At the contest, the girl received the 1st place.

Kim appeared on the screen for the first time in 2006 — without having any experience as an actress, she took part in the Korean drama under the title Queen of the Game. The picture tells about the young man whose father committed suicide because he had lost his job. To revenge the young man made the girl fall in love with him. It turns out that the girl is a daughter of the man who is guilty of his father's death.

At the period of the shootings in the series Queen of the Game, the girl hasn't graduated from the university. She decided to receive education and then to develop herself in the career. It took her three years to get the diploma. In 2009 the Korean actress received the invitation to play a role in the fighter The Fugitive: Plan B and then she grounded in her decision to become an actress.

The actress took herself the pseudonym of Claudia Kim not to be confused with the actor Kim Soo-hyeon who is her full namesake. Under this name, the girl had her debut in this series Romance Town (2010). During the next years, she tried herself in the range of Korean TV projects: Brain (2011), Standby (2012), 7th Grade Civil Servant (2013).

In 2012 Claudia took her first steps to conquer Hollywood, and she began with the audition to the movie Furious 7. The directors didn’t consider that the Sian actress would appear on the screen that' s why Kim didn't receive the role. However, the casting director offered to the girl to take part in the series Marco Polo. At the same time, Kim was approved for the role in the movie Avengers: Age of Ultron. In such a way, the actress has to between two projects.

The movie Marco Polo tells about the historical drama about the visit of the researcher to China in the 13th century. In this picture, Claudia performed the role of princess Khutulun — the daughter of the Mongolian governor Hyde. Two seasons which were broadcast on Netflix turned out not to be profitable: the channel lost $200 million. The situation was also aggravated by the negative reviews of the movie critics. It was decided to close the project in 2016.

Kim auditioned for Marvel Studios without knowing what would be the movie. Having read the script, the girl decided that the movie company would shoot the Ant-Man. However, as a result, Claudia received the role of the genetic doctor called Helen Cho in the blockbuster Avengers: Age of Ultron. After the movie came out in 2015 Kim movie in 2015 Kim said that she especially liked the scenes shot in her native Seoul:

"It would be great if Hollywood fell in love with Korea after that."

The participation in the project of Marvel Studios has opened the doors to Hollywood to Claudia. In 2016 she enriched her filmography with the role in the movie The Dark Tower – a screen-adaptation of the same-name cycle of novels written by Stephen King. She performed the role of Arra Champignon – the wife of the leader — Charles, the prophetess who helped the leading characters, Roland from Gilead and to the boy Jake, to escape from the death.

The movie Fantastic Beasts: The Crimes of Grindelwald is one more significant project of the actress. In this movie, the actress appeared in the role of Nagini – the circus artist from Circus Arcanus troup who later would become the faithful snake and one of the guardians of Voldemort.

In one of the interviews, Claudia told that Nagini of the times of Newt Scamander is not that villain who was guilty of Severus Snape's death, but "a vulnerable woman who wants to live." The circus artist amazes the muggles with her ability to transform from the person into the snake and back. However, because of the spell of Maledictus Nagini will inevitably get stuck in the image of the reptile.

The best girl’s friend is the teenager-obscure Credence Barebone (the role is performed, Ezra Miller). In childhood, the boy had to suppress his magic abilities because of his cruel mother that's why his energy transformed into the clot of the dark energy called obscure. The picture Fantastic Beasts: The Crimes of Grindelwald comes to an end with the fact Credence’s obscure destroys Manhattan. After that, the boy escapes from the house and joins the troupe of Circus Arcanus.

"It’s amazing that these two broken souls are ready for friendship. For Nagini Credence is special because he helps her to control and master her magic abilities", - Claudia Kim cleared up in the interview.

There is no exact information about the personal life of the Korean actress. Probably she has neither husband nor children. Even her social networks don’t help to disclose this secret: on Instagram, the girl publishes only photos from the shootings and film festivals. Sometimes her partners in the movies appear on the pictures on her Instagram, for example, Ezra Miller and Leonard Wu from the TV series Marco Polo. However, Claudia wasn’t noticed in the romantic atmosphere with any of them.

Marion Cotillard is the exemplary actress for Claudia Kim. Moreover, Claudia repeatedly told that she would like to take part in the Hollywood project with her compatriots, for example with Yunjin Kim from the series Lost.

In November of 2018 the second part of the story Fantastic Beasts: The Crimes of Grindelwald with the participation of Kim about Newt Scamander was released in the Russian hire. 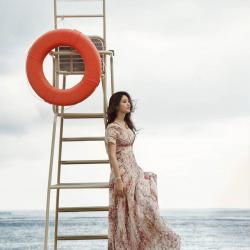