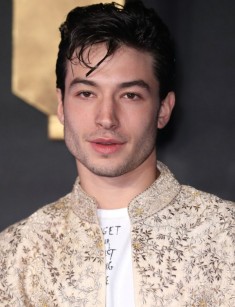 Ezra Matthew Miller is an American actor, musician, and singer, the star of the movie. We Need to Talk About Kevin. Ezra Miller was born on the 30th of September, 1992 in the city of Hoboken (the State of New Jersey, the U.S.). The father of the boy Robert Miller was the senior vice-president in Hyperion Books publishing house, and his mother Marta Miller, who has German roots, was working as a professional dancer. Ezra is the youngest of three children. He has two elder sisters called Caitlin and Saiya.

Marta Miller was developing the curiosity, imagination, and aspiration to the creativity in her children. Mainly, Ezra's choice of the actor's career is his mother's merit. In childhood, the boy had a speech defect. To correct it, the parents of the future star took the boy to the vocal lessons. In a short time, Miller Jr. has got rid of this defect but hasn’t given up the music.

By the age of six, Ezra already started to be engaged in the opera singing. At this age, for the first time, he appeared on the stage and acted in the opera White Raven. Besides, in childhood, Ezra Miller has already participated in the performances of the famous New York theater - Metropolitan Opera.

Ezra Miller began his acting career at the age of sixteen. At first, he received episodic roles in the series. In 2008 the young man got his first leading role in the movie Afterschool where he performed the part of Robert who by accident had shot the tragic incident with his camera. His next work was the role in the picture City Island (2009) on the movie set of which Ezra got acquainted with the actors Andy García, Steven Strait, Julianna Margulies became the following work.

The actor received one successful role after another. In 2010 Miller enriched his filmography with the work in the comedy melodrama Every Day about the about the forty-year-old clerk Ned (Liev Schreiber) who had to change his views on the family relations, work, and children. Ezra Miller has received the role of Jonah, the eldest son of the major character. The same year the actor got the leading role of the school leader in the picture Beware the Gonzo. Zoe Kravitz became Ezra Miller’s partner on the movie set.

In 2011 the actor played in the comedy-drama Relatives narrating how during the wedding celebration there met the relatives of the groom and the bride. Demi Moore and Ellen Barkin have become Ezra's colleagues on the movie set.

Ezra has become famous due to his role of Kevin – the teenage murderer in the movie We Need to Talk About Kevin. To get this role, the young man had to pass the audition six times. The movie was premiered at the Cannes Film Festival. The film has become a sensation and attracted the attention of the critics. The public began to talk about Ezra Miller as a talented young actor. Later, Miller appeared in the TV series Californication and two seasons of the series Royal Pains.

In 2012 Ezra performed in the movie The Perks of Being a Wallflower directed by Stephen Chbosky. The young actor played the role of the gay Patrick. The film tells about the teenagers who endure the period of maturation. Together with Miller Logan Lerman and Emma Watson took part in the shooting process. In 2014 the actor transformed into the character of Leon Dupuis, the lover of Emma Bovary (Mia Wasikowska), in the screen adaptation of the novel Madame Bovary written by Gustave Flaubert. Sophie Barthes has directed this movie.

In 2015 the actor took part in the biographic thriller The Stanford Prison Experiment. According to the idea of the psychologist, the team of the volunteers was divided into two parts – the supervisors and the prisoners. At the same time, each member of the team started behaving unpredictably. The same year Ezra has performed in the comedies Trainwreck in which he has appeared in the role of the admirer of the young journalist Amy (Amy Schumer).

The band Sons of an Illustrious Father is a band of five members. The music of the band combines a couple of stylistic directions - country, folk, and blues music.

The compositions of this band are a kind of a mix of traditional and modern music. In 2010 the young people performed with the concerts in all American states.

The actor’s fans note that his appearance is similar to the actor Finn Wolfhard who is known due to his role of Richie Tozier in the drama horror movie It. The actors look similar to two brothers, and they have the 10-year age difference.

In 2011 the actor appeared in the center of the scandal connected with the drugs. On the 28th of June of this year, the police officers stopped his car where they found Ezra with 20 grams of marijuana. The actor was accused of the storing of the drugs, but soon the charge was dismissed. Ezra had to pay the penalty of 600 dollars. Later the actor confessed that he didn't see sense to conceal that he was smoking marijuana as this plant wasn’t harmful.

At first, the actor had traditional orientation but after the role in the movie The Perks of Being a Wallflower Miller began to appear more and more often in the company of young guys.

In 2012 Ezra Miller took part in the interview to Out magazine and gave comments on his personal life. The actor told that he was a queer. It means that he has relations both with women and men. By the words of Ezra, the actor doesn't prefer the definite sex; he loves people.

At present, on his personal photos, the actor can be seen in the embraces of the young man. Ezra keeps the name of the guy in secret from the public. The actor doesn't have his personal pages on the social networks including Instagram, Twitter, and Facebook.

In 2016 there came to an end the shootings of the superheroic fighter Batman v Superman: Dawn of Justice directed by Zack Snyder. Ezra Miller whose height is 181 cm has played the role of Flash. The Flash performed by Ezra Miller is able to develop the phenomenal speed of the movement, applies his superhuman abilities which break the laws of the physical world.

In reality, Miller’s character has the name of Barry Allen. The young man is rather slow by his nature, he works as a scientist and cooperates with the police. Once Barry gets the electrical charge during the thunderstorm. Later he notices the changes which have happened to him.

Besides, Ezra Miller appeared in the controversial image in the superheroic comedy Suicide Squad which received the Academic Awards for Best Makeup and Hairstyling. The same year there was released the movie Fantastic Beasts and Where to Find Them with the participation of the actor. David Yates has become the director of this movie.

The story which preceded the events happening in the movies of Harry Potter has become the basis of the plot of this fantastic movie. Ezra Miller has embodied the character called Credence Barebone, the son of the non- magician woman Mary Lou (Samantha Morton) who admits that the witches and sorcerers are dangerous for the society. Also, Colin Farrell, Eddie Redmayne, Katherine Waterston, Dan Fogler, Alison Sudol also participated in this picture.

At present Ezra Miller participates in the second part of the movie Fantastic Beasts: The Crimes of Grindelwald which narrates the events happening at the beginning of the 20th century in Europe. In the movie, the leading characters are presented by the Hollywood stars Eddie Redmayne, Jude Law, Johnny Depp. The movie Flash in which Miller will appear as the primary character will soon come on the screen. 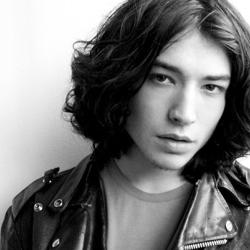