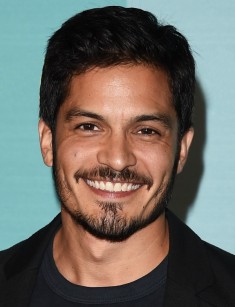 It seems that if Nicholas Gonzalez gets to work, he takes a lot of efforts to perform it the best way possible. If he studies literature, he does it at two universities at the same time. If he writes his thesis, as a subject, he chooses Marilyn Monroe’s favorite literary work "Ulysses" written by James Joyce. If he reads, he covers up to eight books during a week. And all this goes along with the fact that at present he is a successful series actor.

The future star of TV screens was born on the 3rd of January, 1976 in Texas town of San Antonio in the family of John and Silvia Gonzalez. However, at that time his father was far from his family – he served in the army. Nicholas Edward (the full name of the actor) has Mexican roots. At first, he studied at Central Catholic High School for boys where he demonstrated great skills in the sport and won in the state competitions of the cross-country race.

Upon the completion of the studies at school at the age of eighteen, he received the interesting offer to come to enter the military academy West Point according to the government’s recommendation. Though, the candidate didn’t accept this offer and as well as his elder brother continued his education at Stanford University. The constant urge for knowledge brought him to Oxford, and later – to Dublin college where he received the Bachelor’s degree of arts.

Initially, Nicholas was planning to get engaged in the banking and consulting, but the destiny in the person of the university professor Alma Martinez had another plan for him. She inspired the young man to have a theatrical future.

The 20-minute dialogue and a kind of trance between the actor and the audience in the premier political play Gas encouraged the actor to continue stage activities and to move to Los Angeles in 1998.

"It is the greatest mistake in my career", – Nicholas commented on his decision based not on the profit but on the opportunity to become happy.

On the television, Gonzalez had his debut in the episodic roles of the series Dharma and Greg which was directed by the creator of the series The Big Bang Theory and Undressed which narrate about the complex life of teenagers. The episodes with the participation of Nicholas have become the most demanded and viewed in the history of the series just for a week.

The drama My Little Assassin became the first full-fledged work for the actor and after this there followed the shootings in the famous series Walker, Texas Ranger. The transformation in the medical student who gave up his specialty and became a boxer in the Resurrection has brought popularity and recognition to the Mexican actor.

However, it wasn’t a novelty to try on the lab coat as in 2017 he appeared in the role of one of the characters in The Good Doctor. By the way, in comparison with other colleagues, it turned out much easier for him to learn the special terminology as his father and brother belonged to the surgeon's profession.

Nicholas considerably enriched his filmography each year: Anacondas: The Hunt for the Blood Orchid, The O.C., Law & Order: Special Victims Unit, Ghost Whisperer and even Ugly Betty – the actor was showered with the offers from the directors.

The actor was lucky to appear in the cult series Grey’s Anatomy and Charlie’s Angels, in the detective Bones and youth series Pretty Little Liars, superhero movie The Flash. Moreover, he has managed to embody his passion for literature in the screen adaptation of the literary works of the famous storytellers Brothers Grimm.

During his career the man managed to work together with the real superstars including show business celebrities, for example, the rapper Snoop Dogg in the movie under the title Down For Life. Gonzalez has become a prototype of the major character of the video game Battlefield: No compromise about the opposition of the drug lord and police officer. The gamers were delighted with the release of this game in 2015.

Even though the actor is handsome and stately (he is 178 cm tall and weighs 77 kilos), his personal life isn't saturated with some love affairs and juicy details discussed and captured by the mass media.

There is information that in 2007 Nicholas was meeting Regina King for some time. She is well-known on the role of the sitcom about life about the ingenious physicist Sheldon Cooper and his friends. On the 16th of April of 2016 to the disappointment of his female admirers after five years of the relations, the actor married his girlfriend Kelsey Crane - the actress of the series Desperate Housewives and How I Met Your Mother.

Their acquaintance began with the message – the young man praised the girl’s white dress. Later her elect continued to surprise her: during the walk on the boat on the Capri island the captain sang the fragment from the opera, and Nicholas knelt with a wedding ring in hands. Kelsey accepted his proposal.

At first, they planned to have a modest wedding in the jungle style and to invite thirty people, but three months before the event they changed their plans. As a result, more than 200 guests attended the celebration which was held in Fig & Olive restaurant. The wedding bouquet consisted of olive branches and peonies. The spouses performed their first dance to the romantic song "You Are the One That I Want."

"We were looking down from the balcony at our guests who were dancing and laughing. It was amazing to watch all these people whom we love!", – the woman has shared her memories.

A year later the child was born in their family – their daughter Ever Lee Wilde. Happy parents shared their news with their followers on Facebook:

"We are looking forward to having sleepless nights and days of pleasure. We are extremely in love with our new little person. She is the best".

What about the hobbies, Gonzalez likes playing golf and poker and also computer games and reading books as well.

In May of 2018, the fans of the series of The Good Doctor and Nicholas Gonzalez found out the information that the series would be prolonged for the second season. The shots from the movie set and also touching photos of the charming growing daughter and his favorite beautiful spouse are published on the actor's social networks - Twitter and Instagram.

Known as the ardent protector of animal rights in September of the same year he took part in the advertising shooting for PETA with the domestic animals of BIF (a hybrid of a Chihuahua and Corgi) and Cisco (a hybrid of a Schnauzer and Poodle). 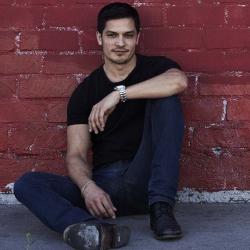