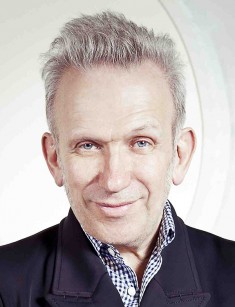 The designer Jean-Paul Gaultier is the genuine revolutionist in the fashion industry: he dressed men in skirts, taught women how to wear lingerie over clothes, and presented diverse models on the runway.

Jean-Paul Gaultier spent his childhood in the cozy suburban area of Paris, Arcueil. The boy frequented his grandmother who indulged him in everything. Jean-Paul often played truant from school and drew. The house where he lived was full of fashion magazines that attracted by the luxurious lifestyle and gorgeous dresses. Gaultier eagerly scrutinized the pictures and marked stylistic decisions of those images.

Little Jean could also watch TV as much as he wanted; he could enjoy shows and feature movies where stars were wearing fascinating costumes for hours. He was particularly mesmerized by the Parisian variety show and the Folies-Bergère cabaret broadcasts. Little by little, the boy started bringing those ideas to life. Gaultier’s first model was his Teddy bear: he made clothes for the toy, including a wedding dress and an astronaut’s spacesuit.

Gaultier is one of the few fashion designers who had no professional education; he was the favorite of Fate. Jean-Paul was sending out his letters and sketches to the capital fashion houses. Suddenly, Pierre Cardin himself replied: the master not only appreciated the beginning designer’s works but also offered him a position of his own assistant. Thus, the young man started conquering Paris and trendy people’s hearts.

Jean-Paul spent a year learning from the genius fashion designer and then decided to separate from him. In 1976, Gaultier founded his own company; the man’s school friends, Francis Menuge and Donald Potard, took the head positions. The same year, the designer presented his first clothing line. However, the show was not popular among the press and celebrities: another designer’s collection came out that day.

The failure encouraged Jean-Paul to look for his own ways of attracting people. Scandals and eccentric behavior always work. Gaultier held his shows in the most unusual places: a tram depot, a merry-go-round museum, and even the former prison building. In 2010, there was a fashion show at the Moscow Kazansky railway station.

The designer’s models are also non-standard: plump, short, or aged women appeared instead of thin, tall beauties. Gaultier declared: his fashion was for everybody.

From the first works, one could see the designer’s individuality based on mixed styles and materials. He was experimenting with at-hand materials, and his models were wearing dresses made of tea strainers, napkins, and batteries. Soon, the new star got a nickname “enfant terrible.” The “nasty child” never ceased to wonder critics and fashion experts. The 1981 High Tech Collection impressed the audience immensely: he used trash cans, tin cans, and cat food cartons.

It was Gaultier who made sailor shirts, mariners’ uniform, popular among sharp dressers. It was presented in Jean-Paul’s first collection and became an integral part of people’s clothes ten years before, in 1983: stripes were used in skirts and dresses.

In 1985, the trickster Gaultier dressed men in skirts. His collection And God Created Man was full of the details pertaining to the Scottish kilt; gender stereotypes were smashed.

As for women, the designer made corset dresses a part of their daily style: he was inspired by his grandmother’s pink corset he saw in her wardrobe. In 1983, Jean-Paul presented an invention: the bullet bra. Madonna was one of the celebrities that liked it: she even wore it at her world tour shows.

Still, not everybody was infatuated by Gaultier’s innovations: some critics accused the fashion hooligan of destroying the delicate female beauty.

Madonna was Gaultier’s loyal client; he created a heap of stage costumes for the singer. Mylène Farmer and Kylie Minogue also considered the man their favorite designer. Many famous directors collaborated with Gaultier: he created the costumes for the movies The Fifth Element, Kika, The City of Lost Children, and so on.

In the mid-1990s, tattoos became extremely popular among the European youth: it was the influence of Gaultier’s new Tattoo Collection with its tattoos, piercing, and ethnic accessories.

In the 2000s, Jean-Paul continued to carry out bold experiments; he did not hesitate to present the avant-garde clothes lines notable for their extravagance and also refinement. His work was appreciated. In 2007, the man won the Fashion Group International award as the designer who managed to crash clichés and get rid of fashion borders.

Jean-Paul Gaultier did not limit himself with clothes. In 1983, his company released the perfume which also stood out for its eccentric character and challenged the classic opinions about fragrance. Gaultier’s boutiques may be found in every capital of the world.

In 2014, the designer announced he stopped presenting ready-to-wear collections, but he reserved the right to work on high fashion, perfume, and accessories. Jean-Paul has his own website where visitors may learn the latest news about the designer’s new ideas and achievements.

The fashion master is openly gay. Gaultier is a constant lover who had to go through a personal tragedy. His former classmate, Francis Menuge, was the only love of his life. The couple lived together for 15 years. In 1990, Francis died of the AIDS complications.

Jean-Paul’s pain was incredible. He was going to leave fashion and close the firm that he and Menuge had created. In the course of time, Gaultier realized his lover would not approve of such radical measures and threw himself to work.

After Francis’s death, the designer has been single. He participates in anti-HIV/AIDS campaigns and donates some money to laboratories and science foundations that try to create a cure.

Gaultier is a public person. He often appears on the TV screen; for instance, he used to be the host of the popular MTV show Eurotrash.

In the fall 2017 collection, Jean-Paul mixed cultures: Indian jewelry was combined with hijabs and Jewish national dress motives, and fitted jackets were worn with sports sweaters and one-shoulder dresses.

In spring-summer 2018, Gaultier came back to the 1960s and their fringe, graphic patterns, and wide belts. The audience was surprised, again: the pregnant model Coco Rocha and her two-year-old daughter appeared on the runway wearing the same dresses.

Fashion Freak Show is one of Gaultier’s recent projects. The storyline includes the major scenes related to the designer’s life: the little boy finds his grandmother’s corset, the young man gets a job at Pierre Cardin’s fashion house, the designer creates a men’s skirt. Circus and theater artists played the celebrities that played a significant role in Jean-Paul’s life. The show was premiered in October 2018. 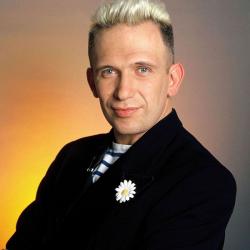