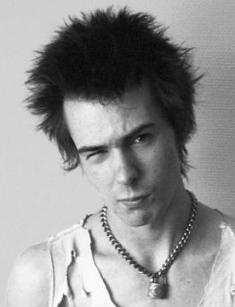 Sid Vicious became the punk-rock legend without any significant music legacy; actually, he was not good at singing or playing the guitar. However, the musician is the first person that comes to one’s mind when punks are mentioned. Indeed, Sid Vicious was the embodiment of the genuine punk style: anarchy, violence, and self-destruction.

Simon John Ritchie was born on May 10, 1957. The boy’s life was hard from the very beginning. His mother, Anne, was a jobless hippie and drug abuser, and the father, John, worked as a watchman and left the family right after his son’s birth.

Anne and the baby went to Ibiza and spent there four years. Further on, they came back to London. Little Ritchie got a stepfather, Christopher Beverley. The family lived in Kent and Somerset; soon, Christopher passed away.

The would-be star quitted school at 15 and entered an art college to study photography.

This is where his friend John Lydon invented the nickname: Lydon’s hamster Sid bit him, and the young man exclaimed: “Sid is really vicious!”

In one of his interviews, the musician said he did not have to study or work; he despised any rules. At 17, the young man had a quarrel with his mother and joined squatters who lived in empty houses. Sid’s mother introduced him to drugs; alcohol and substances were normal for Vicious him in his independent life, too. At the same time, he played drums in various rock groups, and punk that was getting more and more popular became close to the young man.

Vicious met the Sex Pistols musicians at the clothing store SEX: Glen Matlock, Steve Jones, and Paul Cook played punk rock in the evening there and kept persuading the store owner Malcolm McLaren to become their producer. When he agreed, the group Swankers transformed into Sex Pistols.

McLaren’s wife Vivienne Westwood insisted that Sid should become the group’s vocalist, but it was Johnny Rotten (John Lydon) who was selected. There was no place for Vicious in the band at that moment.

Sid had a chance to joined the group The Damned as a vocalist, but he did not go to the auditions. Soon, he joined the group The Flowers of Romance. In the fall 1976, the young man found himself in the middle of the new movement and felt what it was like to stand in front of a raving crowd and be watched.

In 1977, the bass guitar player Matlock left the group, and Sid replaced him. It was only Sid’s eccentric behavior and punk image that let him be accepted: his music abilities were ordinary. People fairly regarded him as a poorly skilled bassist, even though Vicious tried really hard. The group had the bass guitar muted or turned off during their concerts so that its sounding did not interfere with other instruments.

At that time, Sid invented the weird pogo dance showing the core of punk. On April 3, 1977, Vicious debuted on the stage in the London club Screen on the Green. Don Letts recorded the show; it was included in Punk Rock Movie.

Sex Pistols was a successful commercial project, and Sid’s terrible reputation helped gain pretty much success; it was the way to get more and more benefit. As a result, the musician was allowed to skip rehearsals and be high. The 1978 concert in Memphis is a perfect illustration: drunk Sid was throwing chairs, cut his hand by a knife, and behaved like a mental hospital patient, not like a music lover.

Thin, bad-teethed, and attractive Sid was popular with girls. Although he was cocky, he could not spar and often got injured in fights, for example, with David Coverdale.

Vicious liked to give interviews and pose for photographers. Playing to the audience made Sid the personification of punk rock, despite the fact that he had no popular albums or international hits: he created only several covers and one song on his own.

The names Sid and Nancy became symbolic. As the people close to Vicious remembered, his girlfriend was not a nice person. However, she became the one for the musician, except for their mutual “friend” heroin.

Sid met Nancy soon after the artist joined Sex Pistols. The girl was determined to have sex with the whole group; she began from Steve and John and then came to Sid who suddenly fell head over heels with love. Later, Vicious had to seek treatment for hepatitis C. He was more and more fond of Nancy and heroin.

Rotten tried to control his friend, and the group split up in January 1978. Sid and Nancy starred in the movie The Great Rock and Roll Swindle. Soon, Sid took odd jobs here and there, and Nancy became her lover’s producer; she even organized several shows in the United States.

In summer 1978, the couple went to New York and organized the group Vicious White Kids. However, when the young man lost consciousness because he was on drugs, the musicians rejected to work with him.

In October, Sid and Nancy got a room 100 in the New York Chelsea Hotel. Vicious had received $25 000 for some songs, and the money was put into a drawer.

On October 11, local drug dealers learned that the couple from the room 100 could pay anything for a dose. On October 12, Sid got consciousness and found his beloved one dead: the woman was lying on the bathroom floor in a pool of blood with a knife in her belly.

Vicious was arrested on suspicion of murder, although he kept saying he was high and could not remember the events of the previous night. Thanks to Sid’s lawyers, the punk legend was released on McLaren’s bail, and drug dealers were accused because of the stolen $25 000.

Throughout the next three months, Vicious had several suicide attempts and an arrest. On February 1, 1979, Sid took another dose of heroin; he never woke up again. The musician usually used the 5% heroin injections while 80% was found in the last syringe. There is a theory that Sid’s mother gave her son the injection to save him from prison. Thus, the 21-year-old punk star died of an overdose.

On February 7, 1979, Sid’s body was cremated; soon, the mother scattered the ashes at Nancy’s grave. However, rumors had it that Anne dropped the cinerary urn at Heathrow Airport.

Many artists were inspired by Sid and Nancy’s story and devoted songs to them. Alan Parker wrote the book Sid Vicious: No One Is Innocent. In 1986, the director Alex Cox created the movie Sid and Nancy; Gary Oldman and Chloe Webb personified the main characters.