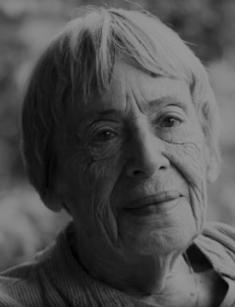 Ursula Le Guin is a famous American writer who revolutionized the fantastic genre: her books picture both imaginable universes and urgent social problems.

The future author was born on October 21, 1929, in the historical town Berkeley, the east coast of San Francisco Bay, California. It was a lucky place to be born in – Berkeley was one of the most liberal places in America.

Besides, the consequences of the Great Depression did not touch the town because it had a prominent educational structure. The local university helped introduce modern technologies quickly.

Ursula grew up in a large family; she had three half-brothers from her parents’ previous marriages: Clifton, Theodore, and Karl.

The father, Alfred Louis Kroeber, was born into a family of German migrants; he studied Native Americans’ life and worked as a professor of anthropology and director of the museum at the University of California. Alfred was a recognized researcher and participated in archeological excavations that contributed to the development of history; his articles and philosophical ideas were successful. Contemporaries even copied his beard and mustache; they nicknamed him “Dean of American Anthropologists”.

Ursula’s mother, Theodora Kroeber, was a narrowly-known writer who created the biography of Ishi, the last native speaker of the Yahi.

The atmosphere around the girl was cultured: Theodora and Alfred talked about literature, science, and the world’s news during their breakfasts. Ursula loved to listen to these interesting dialogs of adults. Just as expected, she began to read early and created her first poems at the age of seven. When the talent turned nine, she wrote her debuting fantastic story.

Two years later, Le Guin sent her sci-fi short story to Astounding Science Fiction; although an editor did not have it printed, young Ursula did not get upset and continued to do what she loved. She attended a middle school in her home town and studied biology and poetry hard. However, her mathematical performance was mediocre: it was difficult to solve problems and remember formulas.

Although Ursula wrote many children’s stories, poems, and critical essays, readers view her as a sci-fi author in the first place; the woman called herself a novelist. Le Guin’s texts differ from Tolkien’s or Martin’s plots – she flavors them with anthropological details and social problems.

Some real phenomena are present in the imaginary worlds: intercultural contacts, xenophobia, feminism, gender issues, communism, and so on. Thus, it is not an easy task to determine the writer’s novels in modern sci-fi frameworks. Le Guin often puts an emphasis on the origin of a human being and describes daily routine details of fantastic races.

The author’s style is strict and clear: she does not overload her texts with excessive metaphors or elaborate sentences; there is no threadbare theme of good and evil. Instead, a reader may find numerous deep thoughts worth pondering.

The debuting novel, Rocannon’s World, was released in 1966; the early story “Semley’s Necklace” (1964) was the prolog to this text.

This book shows the technological universe of the Hainish Cycle: one can see amazing people and extraordinary things, like the relativistic effect. It is a fascinating opportunity to travel endless space with the main character, Rocannon.

The woman loved to scrutinize every tiniest detail. For example, she invented the ansible, which gave the immediate connection between objects, no matter how far they were from each other. The same device is used in the novella “The Word for World Is Forest”.

In 1968, Ursula began to work on the Earthsea cycle. It consists of six books: A Wizard of Earthsea, The Tombs of Atuan, The Farthest Shore, Tehanu, The Other Wind, and the collection of stories Tales from Earthsea. This imaginary world is an archipelago; people, dragons, white barbarians, warlocks, sailors, etc. Magic is an integral part of everyone’s life.

In 2004, the director Robert Lieberman filmed a movie based on the Earthsea cycle; the project starred Sebastian Roché, Chris Gauthier, Jennifer Calvert, and others. However, many of Le Guin’s fans did not appreciate the work: it was impossible to squeeze six books in 170 minutes.

In 1969, literature lovers welcomed the novel The Left Hand of Darkness. The writer focuses on the description of the planet Winter and its people: they have signs of dichogamy, and their sexual activity and child upbringing are discussed. However, it is not only a story about an imaginary tribe – it is a scary tale with an unexpected ending.

In 1973, the psycho-myth “The Ones Who Walk Away from Omelas” was presented. This short story raises significant philosophical issues: for instance, whether people on the edge of life could co-exist with happy citizens, who are mercifully watching their fate. Fyodor Dostoyevsky was among the first to touch upon this subject in his novel The Brothers Karamazov.

Ursula’s book won the Hugo Award for Best Short Story in 1974. Besides, the novelist could boast other prestigious prizes: Locus Awards, Nebula Awards, and so on.

The woman met her future husband in France, where she went to participate in the Fulbright program. Charles was an American of the French origin and worked as a professor of history. The couple married in 1953 and never parted.

The spouses had three children: the daughters Elisabeth and Caroline and the son Theo. They had four grandchildren, pets, many loyal friends.

Ursula did not like to talk about her personal life; journalists only knew that everything was calm and peaceful. In her last years, the writer complained that she stopped traveling with her husband as they reached the senior age: they read literature (from Leo Tolstoy and Ivan Turgenev to Rainer Maria Rilke and Jane Austin) before lunch. Besides, the author liked Mikhail Bulgakov, Yevgeny Zamyatin, and Ivan Goncharov.

At the same time, Le Guin had no particular preferences: she never named her favorite writer and believed that the question about best novels was irrelevant, for art tolerated no competition. Besides, the spouses watched movies together and sometimes enjoyed landscapes in South-East Oregon.

The writer passed away on January 22, 2018, in her own house in Portland. According to her son, Theo, his mother’s health had worsened in the last few months.

Ursula Le Guin’s net worth was $10 million by the moment of her death.