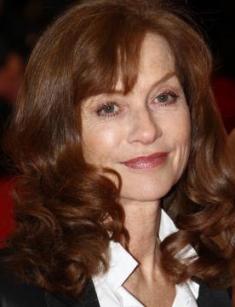 Biography review This actress is called an icon of French and European cinema for a reason. Isabelle Huppert embodied many masterpieces on the screen. Most of her roles are a combination of acting, aristocratic refinement, and deep drama. Movies with Isabelle's participation, Les valseuses, La storia vera della signora dalle camelie, Madame Bovary, La Pianiste, 8 femmes (8 Women), are for real movie gourmets.

This actress is called an icon of French and European cinema for a reason. Isabelle Huppert embodied many masterpieces on the screen. Most of her roles are a combination of acting, aristocratic refinement, and deep drama. Movies with Isabelle's participation, Les valseuses, La storia vera della signora dalle camelie, Madame Bovary, La Pianiste, 8 femmes, are for real movie gourmets.

Isabelle Huppert was born in the spring of 1953 in the suburbs of Paris and received the name Isabelle Anne Madeleine at birth. The girl became the fifth child in the family, where three older sisters and a brother were brought up. In an old town called Ville-d'Avray, she spent her childhood and youth. The future actress grew up in a wealthy family. Her father, Raymond Huppert, owned a company that manufactured safes. The mother, Annick (née Beau) taught English in a private school. The woman had the most considerable influence on her daughter's future.

Thanks to her mother, Isabelle Huppert fell in love with foreign languages and became involved in the world of international literature and cinema. Because of the acquaintance with the Soviet cult movie The Cranes Are Flying, Isabelle finally confirmed her desire to play on stage and star in the movies. After graduating from school, the girl went to continue her education at the famous Sorbonne University. Here Isabelle enthusiastically studied Slavic languages. Besides, Huppert continued her musical education at school. The student took piano lessons at the Conservatoire à rayonnement régional de Versailles. Isabelle Huppert in her youth At the Sorbonne University, Isabelle became even more interested in the theater and engaged in acting.

After graduating from university, Isabelle tried her hand at many stages in France, including the Comédie-Française, the Royal National Theatre, and the Théâtre de l'Odéon. The actress performed classical repertoire plays, among Isabelle's roles are the characters from the tragedies and dramas Phèdre(s), Mary Stuart, Jeanne d'Arc au bûcher, A Streetcar Named Desire, God of Carnage. In 1976, she performed in the literary field, releasing a book called L'homme chewing-gum et la femme ventre.

The cinematic biography of Isabelle Huppert started when the girl turned 19 years old. The novice actress made her debut in Nina Companeez's melodrama Faustine et le Bel Été. In the same 1972, came out another movie with the participation of the French. This is a movie by Claude Sautet called César and Rosalie.

After the release of these movies, Huppert realized that it was necessary to work seriously on acting skill. Isabelle attended acting classes and developed her skills.

In the first half of the 1970s, the actress was actively involved in filming. However, almost all the roles played by the actress in this period, you can unite in the image of a troubled teenage girl, which significantly contributed to the appearance of the actress with a height of 5'3'' (160 cm) and the weight of fewer than 115 lbs (52 kg). Perhaps the exception to the rule can only be called the drama Dupont Lajoie, after which Huppert was seen as an actress who was able to embody deep psychological images.

In 1975, Isabelle Huppert appeared in the legendary movie Le juge et l'assassin (The Judge and the Assassin) directed by Bertrand Tavernier. The young actress starred opposite such great actors as Philippe Noiret and Michel Galabru. Huppert could embody the fragility and strength of personality of her heroine, which movie critics and the audience immediately noted.

The following work of the talented Frenchwoman in the movie Violette Nozière, where the actress got the lead role, brought the first prestigious award at the Cannes Film Festival. The role was the first in a series of characters with a complex fate and contradictory characters. Violette is a girl engaged in prostitution, who decides to kill her parents.

The character of the movie Story of Women (Une affaire de femmes), Marie, is a woman who paid with her life for the abortion business. The heroine of the criminal movie La Cérémonie, Jeanne, chooses violence for self-affirmation.

Cooperation with Claude Chabrol appeared to be fruitful. The director called Huppert for key roles in several masterpieces, including the movies Madame Bovary, which the director filmed for Isabelle, and a criminal comedy The Swindle (Rien ne va plus). All these movies were released in the 1990s and immediately turned into cult ones. The works brought Isabelle prizes of the Venice and Moscow Film Festivals, The César Award and others.

In the last joint work Comedy of Power that the audience saw at The Berlin International Film Festival in 2006, Isabelle Huppert's heroine, Jeanne, works as a judge. The woman revels in power over the representatives of the corrupt elite, who received the status of high-profile defendants and now face trial. But at the same time, the protagonist has no luck in her personal life as the husband falls out the window.

In the early 2000s, fans of the talent of a French movie star saw the true masterpieces of cinema, among them the pictures The Piano Teacher, 8 Women, Merci pour le Chocolat, Gabrielle, and others. All these projects were triumphant in many countries and brought Isabelle Huppert new prestigious awards and prizes, including BAFTA and prizes of Berlin and Cannes Film Festivals. In 2010, the actress received the title of "arguably the world's greatest screen actress" according to VanAirsdale magazine.

In the new century, the artist continued to delight fans with new masterpieces. Among Isabelle's recent works, released in recent decades, the projects Body art, Louder Than Bombs and Paris Follies are of particular interest to the audience.

Among the significant works from the filmography of the last years is the role of Eva, a thoughtful daughter of older people, in the movie called Amour. The parents of the protagonist live in a separate home. The mother, Anne (Emmanuelle Riva), has the paralysis, but the father, Georges (Jean-Louis Trintignant), continues to care for his wife.

In 2013, the actress performed the role of the abbess of the monastery in the drama The Nun. Two years later, she appeared in the actor's duet with Gérard Depardieu in the movie Valley of Love. The actors played a couple in a divorce, which after the suicide of his son found his message to visit the Valley of Death in the United States.

French and European movie star does not like the noise, bustle, and crowds of the public. Personal life of Isabelle Huppert has always been in the shade and silence.

Since 1982, the actress married to French actor, writer, and director Ronald Chammah. There have never been rumors in the press about the problems of this couple. Huppert never brought to the public the details of private life and was not noticed in affairs with other men. The couple gave birth to three children, Lolita, Lorenzo, and Angelo. The older children, daughter Lolita and son Lorenzo, followed the way of their parents and also became actors.

Due to the secrecy, the actress does not use social networks, but some photos of Isabelle Huppert appear on the fan pages on Instagram. In the comments, fans call the actress a style icon.

Nowadays, the creative career of the actress is developing no less intensively than in her youth. In 2016, the thriller by Paul Verhoeven called Elle with the participation of Isabelle Huppert was released. For portraying the image of Michèle Leblanc, the actress received the Golden Globe Award and an Oscar nomination. In the same year, fans could enjoy Isabelle's acting in Luc Bondy's comedy False Confessions about the love of the poor young Dorante to a wealthy widow. Having overcome prejudices, the couple finds happiness.

In 2017, the actress starred in the drama Barrage about the relationship between mother and daughter as well as in the mystical thriller Madame Hyde about the schoolteacher who changes as a result of lightning struck, and in the family drama Happy End about members of the large family, full of a wealthy life.

On February 21, 2018, premiered the movie Eva starring Isabelle Huppert. The melodrama is about the relationship between a young writer and a fateful woman. The protagonist, Bertrand (Gaspard Ulliel), creates a play about a young man who is in love with a housemaid. The writer himself decides to experiment and to fall in love with the prototype of the play's heroine, Eva.

Isabelle appeared in the historical series The Romanoffs by Matthew Weiner (the creator of Mad Men). Huppert starred opposite Aaron Eckhart.

Isabelle Huppert has a net worth of $40 million.