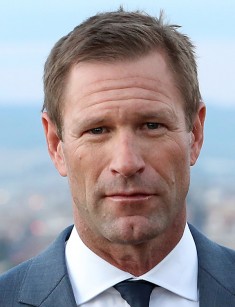 Aaron Edward Eckhart is an American film actor, nominee for the Golden Globe Award for the main role of Nick Naylor in the comedy "Here Smoke."

Aaron was born on March 12, 1968, in Cupertino, California and became the third son in the Mormon family. His mother Mary wrote fairy tales for children. His father James worked as an IT specialist. The family attended The Church of Jesus Christ of Latter-day Saints, where Aaron served in adolescence.

In 1981, Eckhart moved to the UK, where his father was sent to work. In England, the youngest son graduated from the educational institution of the American community ACS International School. In the UK, Aaron began interested in theater, participating in school plays.

4 years later, James was again sent to a new job in Sydney. In Australia, Aaron entered high school and appeared in the play "Waiting for Godot". In the second year, he moved to the correspondence department and went to Hawaii, where he was fascinated by surfing. Three years later, the young man entered the private religious Brigham Young University. As a student, he often visited France and Switzerland, where he served in the Mormon mission.

In the early 90's, he starred in the first motion pictures on religion topic - "Ancient Secrets of the Bible", "Godly Sorrow," "Slaughter of the Innocents." In 1994, he received a bachelor's degree in fine arts and began his acting career, remaining a faithful member of the church. For some time the young actor lived in New York, where he played in the theatre. But there were few roles, and Aaron was forced to work as a loader, driver or handyman.

In 1997, the theater director Neil LaBute invited Eckhart to star in a black comedy "The Company Men" for the main role of Chad. Also, Matt Malloy and Stacy Edwards appeared in the film. The film was shown at the Cannes Festival in 1997 in the program "Un Certain Regard." Aaron Eckhart received the film festival award in Taormina, the Independent Spirit Award, and the Satellite Awards - 98.

A year later, Aaron received the role of the main character in the comedy by Neil LaBute “Your Friends & Neighbors," in which Amy Brenneman, Nastassja Kinski, and Catherine Keener also starred. In the thriller "Thursday", Eckhart starred along with Thomas Jane and Mickey Rourke. In the drama "Any Given Sunday" by Oliver Stone Eckhart got the role of Nick Crozier. His partners were Al Pacino and Cameron Diaz.

In 2000, Aaron appeared in the biographical film "Erin Brockovich" with Julia Roberts in the title role. In order to play George, an experienced biker, Aaron bought a motorcycle and learned how to drive. In the same year, another comedy "Nurse Betty" by Neil LaBute was released. Eckhart got the role of the drug dealer Dal Saizmur, the husband of the main character Betty (Renée Zellweger). A year later, the actor played the main role in the psychological thriller "The Promise" by Sean Penn.

In 2002, Aaron starred in the main role in the romantic melodrama "Whiplash" along with Gwyneth Paltrow. In 2003, three films with Aaron Eckhart were released: apocalyptic film "The Core ", the western by Ron Howard "The Missing", the fantastic action movie "Paycheck." In 2004, the actor played the role of an FBI agent Thomas Makelway in the psychological thriller "Suspect Zero." In the comedy "Conversations with Other Women" by Hans Canosa, Aaron Eckhart played the main role along with Helena Bonham Carter and Nora Zehetner.

In the mid-2000s, the director Jason Reitman began filming the comedy "Jason Reitman", in which he invited Aaron Eckhart to the main role of Nick Naylor, the lobbyist of the Tobacco Institute. For his work in the film, the actor received a number of nominations, including the Golden Globe Award. In contrast to the hero, who by all means convinces others to begin smoking, Aaron gave up smoking with the help of hypnosis.

In 2006, Aaron appeared in the horror film "The Wicker Man" and the detective "The Black Dahlia" along with Josh Hartnett and Scarlett Johansson in the leading roles. 2007 was very successful for the creative biography of the actor. With the participation of Eckhart, three films were released at the same time, in which the actor got the main role. In the drama "Duplicity" Aaron turned into Travis Vuoso. In the comedy "Meet Bill" Eckhart starred along with Jessica Alba. In the melodrama "No Reservations", Aaron appeared in the company of the screen star Catherine Zeta-Jones.

In the second part of the Batman trilogy, “Black Knight" by Christopher Nolan, Aaron gets the main role of a district attorney Harvey Dent, who fights against crime with legal methods. In the romantic melodrama "Love happens" Aaron reincarnates in the literary writer Burke, who managed to find the strength to live on after the death of his girlfriend. After writing a bestseller, the writer met a new love - Eloise Chandler (Jennifer Aniston).

In 2011, Aaron played a married couple along with Nicole Kidman in the drama "Rabbit Hole." For the role of Howie Corbett, the actor was a nominee for "Independent Spirit" award in the nomination for Best Actor. Film directors offered Aaron only main roles. Eckhart also starred in such films as "World Invasion: Battle Los Angeles", "The Rum Diary", "Erased".

In 2013, there was a premiere of a screen version of the thriller by Antoine Fuqua "Olympus Has Fallen ", where Gerard Butler in the role of an FBI ex-agent rescues the US president (Aaron Eckhart) from terrorists. In the fantastic film of Stuart Beattie "I, Frankenstein ", which was released in 2014, the actor turns into a monster of Adam Frankenstein.

Athletic body and high growth of Aaron Eckhart (183 cm) made the young man attractive in the eyes of girls. But the actor was not in a hurry to start a long relationship with the girls. Only in the late 90's, Aaron was engaged to his partner in the film "The Company Men" Emily Kline, with whom in 1998 he broke up.

There was information that Eckhart had relations with the country singer Christine Osborne, with the actresses Gwyneth Paltrow, Charlize Theron, Jennifer Aniston, and Molly Sims. But all the speculation about Aaron's relationship was built only on rumors. Currently, the actor is still single, and information about his personal life is closed to those around him. Aaron works a lot. In his spare time, he creates art photos. He has no pages on the Instagram.

In 2016, 4 films with Aaron Eckhart were released: the drama "Sully", where the actor played along with Tom Hanks, the film "Bleed for This" about boxing champion Vinny Paz, the sequel "Olympus Has Fallen" - "London Has Fallen" and the horror "Incarnate", in which Aaron played the role of exorcist, who rid a boy of the evil spirit.

Now the actor stars in the thriller "A Scanner Darkly", the action movie based on the fairy tale of James Barry "Peter Pan" and the criminal film "Live". 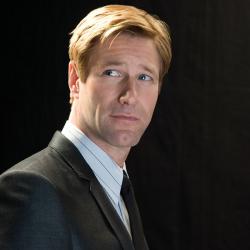