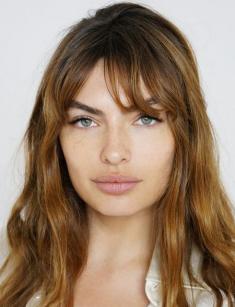 Alyssa Miller is an American supermodel, who gained popularity after a photo shoot for a fashion magazine Vogue, released in the 2000s.A cooperation with fashion designers of world importance made the girl famous and recognizable. Photographers and designers of the USA and Europe appreciated Alyssa's attractive appearance and charisma.

Alyssa Miller was born on July 4, 1989 in Los Angeles. A girl dreamed about career from an early age. She decorated the walls of the children's room with posters from glossy magazines and knew all about the famous models and a world fashion.

Alyssa stood out among her peers from her youth. The blood of Austrian, British, Scottish ancestors flows in her veins, that is why many designers call her an American with European appearance in the interview.

At the age of 14, the girl blossomed, and her passion did not weaken, so the parents decided to help her daughter's dream come true. They sent her picture to a branch of the model agency IMG. The agents sent a negative response to the application, as they considered the applicant too young to cooperate.

The girl did not lose heart and began to send photos to other companies hoping for luck. She was lucky: the office of the Agency "Marilyn", located in New York, offered Miller a contract.

For 2 years, Alyssa waited for the finest hour, she was content with photo shoots for catalogs. There were no interesting offers: it seemed as if she was not noticed. But everything changed at the moment when in 2005 she became a participant of Stella McCartney fashion house show. A confident passage on the catwalk in the clothes of designer made Alyssa famous.

The first success inspired the model. She began to storm the fashionable Olympus. Dozens of offers began to come to the girl, and in 2006 she signed a contract with 2 agencies. Miller managed to get 2 times on the cover of a glossy magazine Vogue, which is considered to be a great achievement in the profile area for the model. The model was not deprived of attention by other publications. Alyssa's career took off. From that moment on, major shows, impressive photo shoots and releases began to appear in her biography.

In 2010, Alyssa Miller appeared on the cover of ELLE magazine, and a publisher again invited the beauty to cooperate a couple of years later. At the same time, she worked with Guess fashion house, she worked as an advertising face for 12 months.Alyssa was at the peak of fame, when she became the face of the premium brand. Designers Intimissimi, Laura Biagiotti, Juicy Couture and others wanted to work with her. A participation in the enchanting shows of the underwear brand Victoria's Secret turned out to be a great success. The representatives of Diesel, Bebe, Chopard and other brands in eager rivalry made appointments for Alyssa Miller, inviting her to work.

In 2011, Alyssa appeared in the pictures of the sports magazine Sports Illustrated Swimsuit Issue. She appeared before the public in a swimsuit on images and was among the first 5 models who appeared on the pages of the publication. The dream of a little girl became a reality.

In 2012, the perfume house Blumarine bellissima chose Miller as his muse. Alyssa became an ambassador of the brand. The same year, she tried herself as an actress, playing a mermaid in the music video of Train for the song "Mermaid".

A successful and beautiful girl was never in a hurry to build a personal life. A career was for her in the first place, so the media had to be satisfied with only rumors about her possible romantic relationships. The girl did not think about her husband and children, because she spent all her free time, working at shows and acting for fashion publications.

In 2013, Alyssa attracted the attention of reporters with her affair with an actor Jake Gyllenhaal. The couple openly appeared in public, not hiding their feelings. The girl accompanied Jake at social events and often gathered friends at the party, which she organized with beloved.

Despite the apparent idyll, the couple broke up. But in 2014, the paparazzi often noticed the model and actor together, hinting that the young people are together again. Whether Alyssa Miller's heart is free now is not known, but her Instagram account regularly publishes joint photos with Cameron Avery. For this reason, fans speculate about their romantic relationship.

In 2018, Alyssa Miller is very popular among models. She is regularly invited to cooperate with model houses, and representatives of various brands constantly send the girl offers to become an advertising person of a brand.

Alyssa has a lot of plans for 2019, but so far the model does not open the veil of secrecy. She continues to work with Pilgrim Entertainment.

The girl does jogging and ballet in her free time. She is interested in meditative practices.