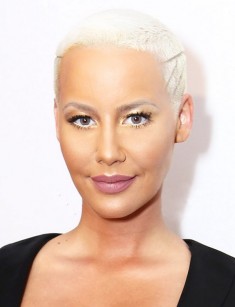 Amber Rose is the personification of the American dream: the girl from Philadelphia, who had always been different from other children, became a famous actress and model who collaborated with largest fashion houses. Millions of fans follow Amber Rose in social networks, and paparazzi try to catch every movement of hers. The eccentric star never ceases to wonder both people and media.

Amber Rose (Levonchuck) was born on October 21, 1983, in Philadelphia, Pennsylvania, US. The future actress grew up in the international family: the mother, Dorothy Rose, came from the West African country Cape Verdean, and the father, Michael Levonchuck, had Irish and Italian roots. Thus, it is pretty hard to identify Amber’s nationality. In one of her interviews, the woman said she was not a person of color, but she could not call herself a white American as well.

Thanks to her unusual appearance, Rose stood out from the early childhood. When the girl was three, the parents divorced. It was necessary to work hard to support the family. The future star was a black sheep at school: people believed she was weird and ridiculous.

Nevertheless, the unfavorable epithets did not upset the young woman. She continued to live the way she did and dress in her own unique style: the old-fashioned Mohawk hairdo and clothes bought in charity shops and remade to Amber’s taste.

In her childhood, Amber Rose dreamed of becoming a marine biologist. However, as she told journalists, life gave her another way.

At the age of 15, Amber started working in a strip club. She remembers she could not believe she actually did it. Soon, the young woman became less tense. She earned her living that way until 25. Amber Rose speaks about that time openly:

“I was young, beautiful, I was onstage, I wasn’t really ashamed of my body. I made lifelong friends."

In 2009, Amber left Philadelphia for New York where she caught the attention of Margo Wainwright who worked for Def Jam Records. She believed that Amber’s beauty was perfect for modern music videos. Soon, Rose signed the contract with the prestigious model agency Ford Models.

Amber Rose appeared in many music videos of American rappers: Ludacris, Young Jeezy, Nicki Minaj. However, her dreams were not limited to this collaboration: the woman wanted to try herself in a big-screen movie. Although she had some experience (Rose played Jessie in an episode of the series A Haunting). However, shooting for a movie is entirely different.

The actress debuted on the big screen in 2012 when she appeared in Gang of Roses 2: Next Generation by Jean-Claude La Marre. However, the project was not successful: its rating on IMBD was only 2.8. The next experience was unfortunate again: according to The Hollywood Reporter, the 2014 musical comedy School Dance by Nick Cannon “is equal-opportunity offensive.”

Failures did not stop Amber. In 2014, the actress appeared in the series Selfie; in 2015, she played in Cory Grant’s Sister Code and Kenya Barris’s sitcom Black-ish. Her roles were small. In comparison, Amber’s TV career was more successful: she participated in various shows; rumors had it she was going to create her own TV project with her friend, Blac Chyna.

When Amber began to star in music videos, the rapper Kanye West noticed her. He found a reason to meet the woman he liked, called her, and invited her to his new video. Rose had to go to Los Angeles. Although she never participated in the video, both of them were satisfied with their meeting.

West pampered his beloved one with expensive presents; they visited social events and shot for glossy magazines and brands. The hot Louis Vuitton commercial with the couple was one of their memorable works. The idyll lasted for two years; Amber and Kanye broke up.

Sometimes, the ex-lovers reveal unpleasant things about each other. Kanye is sarcastic about Amber’s past as a strip dancer, and Rose said she was suicidal because of her boyfriend’s humiliation. Their confrontation continues today: the media regularly publish new words of mutual complaints.

In 2011, Rose started dating the American rapper Wiz Khalifa. In March 2012, the couple was engaged; the news about the model’s pregnancy followed. On February 21, 2013, the son, Sebastian Taylor Thomaz, was born. Several months later, on June 8, Amber and Wiz married officially.

In 2014, the couple divorced. It was unexpected for everyone: two weeks before, Rose had posted a photo with her husband on her Instagram and promised she would always love him. The last doubts disappeared when Wiz Khalifa confirmed this information on his Twitter.

Initially, Amber was going to gain the full custody of Sebastian. According to the recent information, the former husband still has full rights on the boy’s upbringing.

After the divorce with Khalifa, Amber Rose’s personal life was secret for a while. In 2017, the press reported about her romance with the American musician 21 Savage, but they broke up in spring 2018.

In summer, the actress was often seen with the basketball player Monté Morris. She told Hollywood Life about the man:

“He is just an all-around good guy! He is from Flint, Michigan, so he comes from humble beginnings like I do.”

Rose keeps surprising people with her daring attire. The woman’s shape gives her the opportunity to experiment with various images: her height is 173 cm., and her weight is 67 kg. However, the model preferred to change something in her body: in winter 2018, she had surgery. She had had back pains because of her large breast size. Thus, the woman had her size reduced by four.

Nowadays, Rose is actively engaged in social work. She has founded The Slut Walk to spread the idea that only a rapist is responsible for rape, not a victim. Besides, the model considers a political career in the future:

“I think it’s kind of like Arnold Schwarzenegger. He had to be kind of the celebrity for a while and work his way up where he had enough money, where he didn’t have to do movies anymore, and then he decided to focus on politics.” 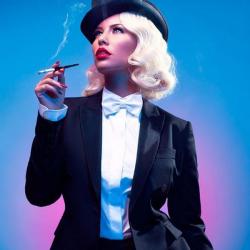