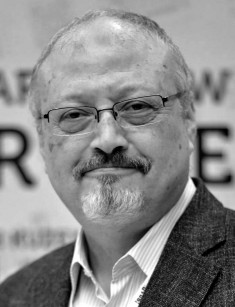 At the beginning of October of 2018, the whole world was shocked by the murder of the Saudi journalist Jamal Khashoggi who was living and working in the USA. The representative of the fourth estate was killed in the consulate of Saudi Arabia located in Istanbul where he went to file his personal documents. Khashoggi was known for his critical position towards the authorities of the USA, Saudi Arabia, and other Arab countries. It also became the main version of this loud assassin in the investigation which was started at once by three states.

Jamal Ahmad Hamza Khashoggi was born on the 13th of October, 1958 in Medina, Saudi Arabia. The family in which the future journalist was born has a privileged position in the Saudi society.

His grandfather on his father’s side is Muhammad Khaled Khashoggi (he has Turkish background and married the native of Saudi Arabia) – was a personal doctor of the king of Saudi Arabia Salman ibn Abdulaziz Al Saud. His uncle Adnan Khashoggi is a Saudi businessman, one of the wealthiest and most influential persons of the world who has made a fortune on arms trafficking. His cousin is a diplomat and producer Dodie Al-Fayed who died in the Parisian road accident with Princess Diana.

Jamal received great basic education in his homeland. Since an early age, he traveled across the world, knew foreign languages and was fond of history, literature, and journalism. Having completed his studies at State Indiana University in the USA in 1982 in Business Administration specialty, Khashoggi came back home and began to work. He received his first job at Tihama bookstores chain where he worked as a regional manager for half a year.

Later, Khashoggi began to be published in the English-language Saudi Gazette, and at the same time, he was working as an assistant manager at the Saudi Okaz newspaper. Since 1987 the range of the editions with which the journalist was cooperating began to grow: these were Asharq Al-Awsat, Al Majalla and Al Muslimoon.

In 1991 Jamal Khashoggi got his first senior position – he became the editor-in-chief of Al Madina newspaper and worked on this position till 1999. It was a very fruitful period in his journalist’s career. Khashoggi was a foreign reporter in such countries as Afghanistan, Algeria, Kuwait, Sudan, and in the countries of Middle East.

At that time the subject of Afghanistan became prior for the journalist, he described the war everyday life of the Islamist militants who struggled against Soviet troops. Osama bin Laden was one of the leaders of this resistance.

Khashoggi more than once met his compatriot, and he knew him rather well and even interviewed him for a couple of times. For example, in 1995 they met Sudan. As the journalist confessed later, in youth he shared bin Laden's ideas and considered that the Arab countries should be set free from the external influence by any means.

Also, it's told that at that period the man cooperated with the intelligence agencies of Saudi Arabia as, by the words of the experts, Khashoggi could not carry out all this work without the silent support from the Saudi intelligence agencies who supported proper Mujahids. Khashoggi denied the principles of "number one terrorist" after the terrorist attack in New York on the 11th of September of 2001.

"Now the most vital problem is in the fact that we should guarantee that our children will never be subject to the influence of the extremist ideas as those 15 Saudi who were led to confusion and seized four planes which they sent directly to the hell", - the journalist wrote at that time.

Since 1999 till 2003 Khashoggi held a post of the deputy chief editor of the Arab newspaper - News - the most important English-language edition in Saudi Arabia. The journalist left this position after he had received the invitation to head Al Vatan newspaper. Though he managed to hold this position only for a couple of months as he was fired by the Ministry of Media of Saudi Arabia for criticizing the Islamic scientist Ibn Taymiyyah (belonging to the period of XIII-XIV century) This scientist is considered to be the founder of Wahhabism – the actual religious movement officially recognized in the country.

The journalist decided that it was high time he changed his life, and he left for London where he became the adviser to the ambassador of Saudi Arabia in Great Britain – Prince Turki Al Faisal. Then, in 2005, he followed Prince to Washington, and while the latter one was holding the post of the Ambassador of Saudi Arabia in the USA, Jamal was working as a media expert.

In April of 2007, Khashoggi came back home and became the head of Al Vatan again. That time the journalist who already gained the reputation of the liberal of progressive views, managed to stay within the "censorship" borders for three years. In 2010 he published the article with ambiguous statements about Salafi (the movement related to Wahhabism). This resulted in the fact that the editor-in-chief was fired for the second time and it was the final.

In 2015 Khashoggi headed the news Al-Arab satellite channel which was founded by the assistance of Prince Prince Al-Waleed bin Talal. This channel was based outside of Saudi Arabia - in Bahrain. Though, the channel was on air for less than eleven hours after what Bahrain's authorities closed it.

After that Khashoggi was working as a commentator on the international channels, among which there were the following ones - MBC, BBC, Al Jazeera, and Dubai TV. Moreover, he was published in Al Arabiya edition and became the most famous political expert in the Arab world. In December of 2016, Saudi Arabia authorities forbade to publish Khashoggi or to show him on the television because of his criticism of the elected USA's president Donald Trump.

In June of 2017, the journalist relocated to the USA, having accused the Crown Prince of Saudi Arabia Mohammad bin Salman of the dissidents' prosecution. In exile, he began to write articles for Washington Post newspaper. In his articles, he criticized Saudi Arabia and its leaders.

Among other things, he accused him of the indulgence to the radicalism and strengthening of the tension with all Persian Gulf States. Khashoggi was hostile to the war in Yemen and to the deteriorations in the relations with Qatar and other actions in the foreign affairs of his native country.

In 2018 Khashoggi again founded the new political party called Democracy for the Arab World Now which represented the opposition in relation to the Crown Prince Mohammad.

Dr. Alaa Nassif became the first wife of Jamal Khashoggi. In this marriage, they had four children: sons Salah and Abdullah, daughters Noha and Razan. All of them received the education in the USA and three from acquired American citizenship.

There is no information in what year the man divorced with his wife. But recently the journalist’s personal life was rather happy: he was going to get married to the citizen of Turkey Hatice Cengiz. He often published their joint photos with his bride in the social networks.

It was Hatice who accompanied Jamal Khashoggi on that fatal day, on the 2nd of October of 2018 to the consulate of Saudi Arabia in Istanbul. The man went here to file the documents for the divorce. When the groom didn’t go out after 11 o’clock, Hatice yelled fire: it turned out that Khashoggi warned her that in case he didn’t appear she had to address Turkish authorities.

Only on the 6th of October Turkey started the investigation upon the disappearance of the dissident. Till that time the authorities were waiting for the happy outcome of the situation as at the consulate they announced that the man wasn’t present on their territory.

"The journalist Jamal Khashoggi was killed as a result of the fight which began in the consulate."

On the 31st of October, it became known that the assassins at once choked Khashoggi right after he appeared in the territory of the consulate, and later dismembered his body. Later there appeared the information that they tortured the unfortunate man before killing him. This information became known to the Turkish authorities due to the record on the smartwatch of the killed journalist. The investigation of the death of the famous political activist is continued.

On the 11th of December, 2018 Jamal Khashoggi was called by Time magazine The Person of the Year who faced the political prosecution. 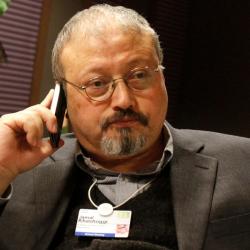