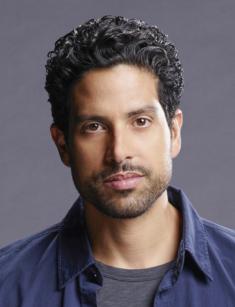 The star began getting popularity as an actor since the 1990s after being interested in sports. Now he can be proud of contributing to famous movies and TV shows. We are glad to introduce Adam Rodriguez to you!

Adam Rodriguez was raised in an extended family of two kids – so, he had a sister Vanessa. Her mom's name was Janet – the woman served as a ticket agent at an airport. Her dad, Ramon, was involved in politics. Adam is of mixed ethnicity – he has relatives from Cuba and Puerto Rico.

He completed his school education in 1993. As a teenager, he was keen on baseball and intended to build a career of a professional baseball player. Unfortunately, he suffered a severe injury which made young Adam deny from his dream. As a result, he found another interest – acting and performing on stage.

Celebrity's professional career in show-business started in the 1990s. Initially, he was a model starring in a commercial for different world brands. 1997 was marked by Rodriguez's first screen appearance – so, he played in one episode of 'NYPD Blue' – his character was a policeman. The same year, the actor also appeared in drama Brooklyn South broadcasted on CBS channel – he played officer Hector Villanueva. Even though the program lasted for an only single season, Adam managed to get lots of fans and fame. He showed TV directors and viewers his excellent skills in acting.

2001 brought Rodriguez his big-screen debut. So, he was cast of the picture Imposter. The following year, she was seen acting as Alejandro Rojas in the picture King Rikki – a contemporary version of Richard III by William Shakespeare. In 2009 his fans could watch the comedy I Can Do Bad All by Myself featuring Rodrigues. He co-starred there alongside Taraji P. In 2015 the actor added the Warner Brothers picture Magic Mike XXL to the list of the projects he appeared in – he acted as Tito. Three years later, Rodriguez voiced a character from Incredibles 2.

In 2016 fans could see Rodriguez playing in Criminal Minds alongside Kirsten Vangsness (who had a role of Penelope Garcia).

Adam also got fame for directing CSI: Miami and CSI: Crime Scene Investigation (where he also acted). Besides, he worked as a director of Scorpion.

Adam Rodriguez’s net worth is evaluated at $16 million.

As for Rodriguez's former girlfriends, he has had an affair with musician Melanie Fiona. They started dating in 2009 and broke up in 2012. Besides, he has been involved in relationships with Ciarra Pardo and Alexandra Cheron.

2016 was marked by the wedding of Adam and his current wife - Grace Gail. Two years before, in 2014, Gail gave birth to their child Frankie Elle. In 2017 their second kid was born. Nowadays, the family resides in New York. Besides, they have houses in Puerto Rico.