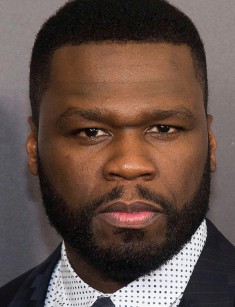 50 Cent is the popular rapper, scriptwriter, director, businessman, and talented actor who has taken part in many significant movies. Curtis Jackson was born on July 6, 1975, in a poor black district in New York. It was a vicious place where people were subject to the law of the jungle.

In his childhood, the boy witnessed the social inequality, dirt, poverty, and deviant behavior; sometimes, he had to fall asleep while somebody was shooting outside, just like in the wild west. Curtis never saw his father: when a 14-year-old black girl Sabrina Jackson discovered she was pregnant, her boyfriend fled and left the young mother alone. However, she did not care about the son much and concentrated on her own business.

Jackson had no permanent job. While the grandparents were looking after the kid, she sold the dangerous mix of cocaine and baking soda. There is no wonder the 12-year-old boy followed in the footsteps of his mother and started drug dealing.

Later, the neglectful mother repented of her attitude toward her child and tried to make amends with expensive presents. Curtis remembered he rarely saw his mother, but each time it was like Christmas: the woman always prepared something for him.

At the age of eight, Curtis was orphaned. Sabrina died in strange circumstances: an unknown man came to the 23-year-old woman’s home, put some sleeping powder to her alcohol drink, turned on the gas, and let her die. The grandparents informed they boy: they said Sabrina would never come home again. Curtis began to live with his grandparents and eight uncles and aunts.

Similar to Mike Tyson, Curtis liked boxing when he was a school student. In his free time, the young man went to a gym where he mastered fighting tricks and blew off his steam on a punching bag. This hobby paid off: today, 50 Cent is a boxing promoter. Jackson associates this sport with music: the art of rap in battles is similar to a boxing match: there are winners and losers in both cases.

There is a “dark spot” in Curtis’s biography: in 1994, a police officer in civilian clothes caught the 19-year-old guy who was trying to buy drugs from a young “entrepreneur.” However, this did not learn his lesson and was arrested again: the police found several ounces of heroin, crack, and firearms in his apartment. 50 Cent was sentenced to three years of prison; nevertheless, he spent a little time there and got an early release.

To some extent, Jackson’s young cousin nicknamed Two Five and 25 Cent introduced the world of hip-hop to Curtis. As the young man got rid of the legal troubles, he realized he should not follow the evil path and decided to direct his energy to the better place. He started practicing in his friend’s cellar and took the nickname “50 Cent” in honor of the famous gangster who lived in Brooklyn in the 1980s. The young man used an old phonograph to have a musical accompaniment.

In 1996, Curtis’s friend introduced him to the popular DJ Jason William Mizell, the member of the mainstream rap group Run-D.M.C. This hip-hop band was the leader of music charts along with Beastie Boys and Public Enemy. This meeting was useful for Curtis: the master of hip-hop taught 50 Cent how to feel the rhythm. At that period, Jam Master Jay Records should have released Jackson’s debuting album, but it never happened.

The young man did not give up. In 1999, he started collaborating with the producers of Trackmasters in Columbia Records. 50 Cent worked super fast: in 14 days, he created more than 30 songs half of which was included in the non-official album Power of the Dollar (2000). The life seemed to be cloudless: 50 Cent was becoming more and more popular. However, in 2000, he was on the verge of death.

The tragic event took place on April 24 when he was sitting in the back of a car not far from his grandmother’s house. An unknown criminal shot at Jackson nine times; one bullet got right into his face; it could have deprived the musician of his voice. Doctors brought the young man to life; it was a miracle he survived. The rehabilitation period lasted for five months; 50 Cent had to walk on crutches for four months. Since that time, the singer always wears body armor in public.

As the rapper recovered, he continued to do what he loved.

50 Cent was lucky to meet Eminem, the guru of rap; later, the musicians recorded several tracks, for instance, “You Don’t Know,” together. The popular rapper appreciated Jackson’s artistic work which helped Curtis to get from rags to riches. Impressed by the young rapper’s songs, Eminem introduced him to the successful beat-maker Dr. Dre. As the one-million contract was signed, 50 Cent recorded the mixtape No Mercy, No Fear.

In winter 2003, Curtis had his first commercial album Get Rich or Die Tryin’ released; this work brought him to the top of the world of rap. The singles “Inda Club” (in 2003, Billboard named it song number one in the US), “P.I.M.P.,” “Don’t’ Push Me,” “If I Can’t,” and others came out. 872 thousand copies of Get Rich or Die Tryin’ were sold in the first four days after the presentation.

The release of the second album, The Massacre, took place in March 2005. It did not take long to see the success: almost 1,5 million copies were sold in the first four days. The singles “Intro,” “Outta Control,” and “In My Hood” sounded in all recorders, and all music channels broadcast his music videos “Candy Shop” created with Olivia, “Disco Inferno,” and “All His Love.”

In 2007, Curtis created the album Bulletproof as the soundtrack for the game 50 Cent: Bulletproof. Two years later, the shooter 50 Cent: Blood on the Sand came out.

In 2008, the single “Get Up” was out; in 2009, the rapper presented his fourth studio album Before I Self Destruct. The next year, fans welcomed the mixtape The Kanan Tape where “I'm the Man” (feat. Sonny Digital), “Nigga,” “Body Bags,” and other hits were included.

50 Cent is not only a successful singer but also a talented actor who can manage any role. Curtis is confident in front of cameras, and directors often offer the rapper to participate in their movies. Today, the musician has appeared in more than 30 projects.

In 2005, Curtis played in Jim Sheridan’s Get Rich or Die Tryin'; its plot literary describes Jackson’s life. The main character is the small boy who breaks the law for money. However, the protagonist changes his attitude toward life and drug dealing: he chooses music.

In 2009, the musician took part in Jon Avnet’s Righteous Kill and collaborated with famous Hollywood actors: Robert De Niro, Al Pacino, and Carla Gugino. Three years later, the man starred in the action movie Freelancers where he played the police officer who swore to punish his father’s murderers.

In 2012, Curtis appeared in David Barrett’s Fire with Fire; the movie tells the story of the firefighter who is put in the witness protection program. Rosario Dawson, Bruce Willis, and Julian McMahon starred in this project.

In 2013, 50 Cent appeared in the drama with comedy elements Last Vegas with Michael Douglas, Kevin Kline, and Morgan Freeman. Besides, he participated in the crime thriller The Prince (2014), Spy (2015) with Jude Law and Jason Statham, and sports drama Southpaw (2015).

The rapper prefers to keep his personal life secret and believes that the details of out-of-stage life should remain private. Journalists discovered that Jackson has a son Marquise with some Shaniqua Tompkins. Curtis often posts photos with his second son Sire on his Instagram page.

Curtis is a successful businessman; he voiced several video games, signed a five-year agreement with Reebok (2003), and starred in the ad of the energy drink “Vitamin Water.”

In 2018, two movies with Curtis appeared on the big screen: the action movie Den of Thieves and the thriller Escape Plan 2: Hades starring Sylvester Stallone and Dave Bautista. 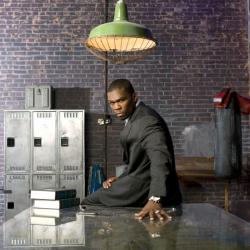