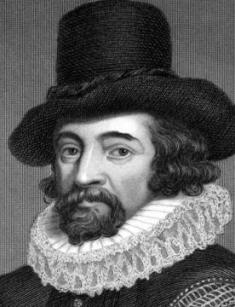 The pioneer of the modern philosophy, the English scientist Francis Bacon is known by contemporaries primarily as the developer of scientific methods of studying nature - induction and experiment. He is the author of such profound literary works as The New Atlantis, Novum Organum (New Method), and Essays.

The founder of empiricism was born on January 22, 1561, in the York House mansion, on one of the principal streets of Central London, the Strand. The scholar's father, Sir Nicholas Bacon, was a politician, and his mother, Anne (Cooke) Bacon was the daughter of Anthony Cooke, a prominent humanist, who raised the King of England and Ireland, Edward VI.

From a very young age, Anne Bacon instilled a love for knowledge in her son. As a woman who knew ancient Greek and Latin, it was easy for her to cope with this task. Besides, the boy himself showed interest in knowledge from a tender age. For two years, Francis attended Trinity College at the University of Cambridge, and then he spent three years in France. He was one of the closest ones of Sir Amias Paulet, the English ambassador.

After the death of his father, in 1579 Bacon was left without a penny. He decided to enroll as an outer barrister at Gray's Inn to study law. In 1582, Francis became a lawyer, and in 1582 - a member of Parliament, and up to the year 1614, he played a prominent role in the debates during the sessions of the House of Commons. From time to time, Bacon wrote letters to Queen Elizabeth I, in which he tried to take an impartial approach to current political issues.

Now biographers agree that had Elizabeth listened to his advice; she would have avoided a couple of conflicts between the Crown and the Parliament. In 1591, he became an adviser to Queen's favorite, the Earl of Essex. Bacon immediately made it clear to the patron that he was loyal to the country and the throne. Thus, when in 1601 the Earl of Essex tried to organize a coup, Bacon, as a lawyer, participated in his conviction as a traitor.

Since Bacon's superiors in rank saw him as their rival, and because he would often express his dissatisfaction with the policy of Elizabeth I in numerous letters, Bacon soon lost the Queen's favor and could not expect a promotion. Under the rule of Elizabeth I, the lawyer did not reach any high positions, but after James I Stuart ascended the throne in 1603, Bacon's career started growing rapidly.

In 1603, Bacon was honored the title of knight, he was given the title of Baron Verulam in 1618, and in 1621 - the title of Viscount St Alban. In the same year 1621, the philosopher was accused of taking bribes. He admitted that the people whose cases fell on his shoulders repeatedly gave him gifts. However, the lawyer denied the accusation that it had influenced any of his decisions. As a result, Francis was deprived of all posts and banned from appearing at court.

Bacon's Essays is considered to be the most significant literary creation of the philosopher, who continuously worked on it for 28 years. Ten essays were published in 1587, and by 1625, the book of essays consisted of 58 texts, a part of which was released in the third, revised edition called Essays.

In these works, Bacon reflected on ambitions, friends, love, science, the vicissitudes of things, and other aspects of human life. The essays were full of point-blank examples and brilliant metaphors. People who seek to achieve extraordinary career goals can find advice in these texts, that are built only on cold calculation. For instance, in these books, there can be observed such statements as:

"All rising to a great place is by a winding stair" and "He that hath wife and children hath given hostages to fortune; for they are impediments to great enterprises, either of virtue or mischief."

Despite Bacon's political activity, philosophy and science took the central position in his life. He rejected Aristotelian deduction that at that time was at its peak of popularity because according to him it was an unsatisfactory method of philosophical experiment and suggested a new instrument of thinking.

The draft of The Great Instauration was developed by Francis Bacon in 1620, as the preface of his Essays. It is known that this work was to consist of six parts (a review of the current state of science, a description of a new method of obtaining real knowledge, a discussion of issues for further scientific investigation, preliminary decisions and the philosophy itself).

Since the basis of the critical part of Francis Bacon's philosophy was built with the doctrine of the so-called "idols" (idola), which distorted the knowledge of people, in the second part of his project, Bacon described the principles of inductive method, with the help of which he proposed to overthrow all the "idols" of the mind. According to Francis, there are four kinds of "idols" that besiege the minds of all humankind:

Describing the prejudices that hinder the development of science, the scholar proposed a three-part division of knowledge made based on mental functions. He referred history to memory, poetry to imagination, and philosophy (which included science) to reason. The basis of scientific knowledge, according to Bacon, consists of induction and experiment. Induction can be complete and incomplete.

Full induction means regular repetition of an object's property in the class, which is under study. Generalizations proceed from the assumption that this will be the case in all similar cases. Incomplete induction includes generalizations made based on the review of only some cases (conclusion by analogy), because, as a rule, the number of all instances is immeasurable, and it is impossible to prove their infinite number theoretically. This conclusion is always probabilistic in its nature.

Trying to create inductive reasoning, Bacon sought not only facts to support a particular conclusion, but also those to refute it. Therefore, he gave birth to two methods of research in natural sciences - elimination and enumeration. And the central role was played by elimination. For example, with the help of this method, he found that the "form" of heat consists of the movement of the smallest particles of the body.

In his theory of knowledge, Bacon held the idea that true knowledge derived from sensual experience (this philosophical position is called empirical). He also gave an overview of the boundaries and nature of human knowledge in each of these categories and pointed to vital areas of research that no one had paid attention to before. The core of Bacon's methodology is a gradual inductive generalization of the facts observed in the experiment.

However, the philosopher was far from simplifying this generalization and emphasized the need to rely on reason in the analysis of facts. In 1620, Bacon wrote the utopia The New Atlantis (published after the author's death, in 1627). It was planned to be as great as Utopia of the brilliant Thomas More, a friend, and mentor of Henry VIII, who later beheaded More because of the intrigues of his second wife, Anne Boleyn.

For this, "the new torch in the darkness of the philosophy of the past," King James granted Francis a pension of 1,200 pounds. In the unfinished work of the New Atlantis, the philosopher talked about the mysterious country Bensalem, which was led by "The King Solomon House," or "Society for the Knowledge of the True Nature of All Things," which united the main wise men of the country.

Francis Bacon's works were distinguished from communist and socialists utopias by notable technocratic features. Bacon's discovery of a new method of cognition and the belief that research should start from observations and not from theories, rank him among the most important representatives of the scientific field of modern times.

It is worth noting that Bacon's doctrine of the law and the ideas of experimental science and empirical method of research, in general, made an invaluable contribution to the treasury of human knowledge. However, during his lifetime, the scientist did not receive significant results either in empirical research or in the field of theory, and his method of inductive reasoning through exceptions was rejected by experimental science.

Bacon was married once. It is known that the wife of the philosopher was three times younger than himself. ‎Alice Barnham, the daughter of the widow of London alderman Benedict Barnham, became the significant other of the great scientist.

Bacon died on April 9, 1626, at the age of 66, by a ridiculous accident. Francis spent his life studying all kinds of natural phenomena, and one winter, riding with the Royal physician in the crew, the scientist came up with the idea to conduct an experiment in which he intended to test the extent to which the cold slowed the process of decay.

The philosopher bought a chicken carcass on the market and buried it in the snow with his own hands. Because of that, he caught a cold, fell ill, and died on the fifth day of his scientific experience. The lawyer's grave is located on the territory of St Michael's Church, St Albans, Hertfordshire, the United Kingdom. It is known that a monument was established on the place of the burial of the author of The New Atlantis book.

"There is no Loneliness sadder than a man without friends. The lack of friends makes the world seem a desert."

"Truth is naked and open daylight, that does not show the masques, and mummeries, and triumphs of the world, half so stately and daintily as candle-lights. . . A mixture of a lie doth ever add pleasure."

"I have often thought upon death, and I find it the least of all evils."

"They are ill discoverers that think there is no land when they can see nothing but sea."