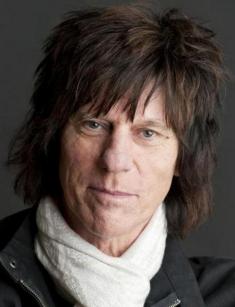 The English musician Jeff Beck is known as one of the three guitarists of the Yardbirds band, as well as the lead singer of his own band called Beck, Bogert & Appice. Seven-time Grammy winner, he is listed the fifth on the Rolling Stone's 100 Greatest Guitarists of All Time. He received The Ivor Novello Award for outstanding contribution to British music and has been inducted into the Rock and Roll Hall of Fame twice: as a member of The Yardbirds (1992) and as a solo artist (2009).

Geoffrey Arnold Beck was born on June 24, 1944, in Wallington, England to Arnold and Ethel Beck. In his childhood, the musician attended Sutton Manor School and sang in a church choir, and then enrolled at one of the best educational institutions for boys in the London burrow. The gifted teenager was interested in art and from the age of six dreamed of performing on stage.

Hearing the song "How High the Moon" on the radio performed by the American guitarist Les Paul, Jeff fell in love with the sound of electric guitar and decided that it was this instrument that he wanted to play. To achieve his goal, Beck borrowed an acoustic guitar from his friend, at the same time learning to play the piano, cello, and drums. Then the young man tried to build his own guitar, using cigar boxes for the body, and a wooden pole from the fence for the neck.

The next steps in the biography of Jeff were studying at Wimbledon College of Art, majoring in painting and decorating, and participation in the student bands Screaming Lord Sutch and The Savages.

After receiving a degree, the young man worked as a car paint-sprayer and a groundsman on a golf course. This lasted till his sister Annetta introduced Beck to Jimmy Page, who opened the music world for the aspiring guitarist.

In 1963, Jeff was introduced to Ian Stewart, a member of The Rolling Stones. With his help, the young guitarist founded his own band Nightshift, recorded two songs on Piccadilly studio and started performing on the stage of one of London's nightclubs. At the same time, Beck briefly joined the band Rumbles, and honed his guitar playing skills, performing songs by Gene Vincent and Buddy Holly.

The beginning of a serious musical career was Jeff's joining the Chiswick band Tridents. The young guitarist liked the band for their blues melodies and compositions in R&B genre, and for a year, he successfully performed with concerts in London clubs and restaurants. At the same time, Beck had a part-time job as a session musician of The Fitz and Startz and recorded "Parlophone" and "I'm Not Running Away" singles together with them.

In March 1965, Jeff replaced Eric Clapton in the popular band the Yardbirds and set himself to work on the Roger the Engineer album. Even though his predecessor recorded the majority of the songs for For Your Love album in 1965, the guitarist's photo appeared on the cover of the American release and this work became part of the official biography of Beck.

In 1966, Jeff shared the duties of lead guitarist with his old friend Jimmy Page, whose main instrument was a bass guitar. The existence of this tandem is evidenced by the video clip used by the cult director Michelangelo Antonioni in the Italian-British feature film Blowup. Later Page finally replaced Beck, who was kicked out of the Yardbirds for his bad character and systematic absenteeism on the rehearsals.

Then the man founded his own band called Jeff Beck Group, which included the bass player Terence "Jet" Harris, singer Rod Stewart, rhythm-guitarist Ronald David «Ronnie» Wood, the piano player Nicholas «Nicky» Christian Hopkins and drummer Micky Waller. The band released two commercially successful albums and after several incidents during their tour, it fell apart in 1969. After that Beck was offered a guitarist position in Pink Floyd and was also invited to Rolling Stones, but the musician preferred the A.N.Other project and recorded four songs for it.

In late 1969, Jeff's career was cut short after a car accident in which the guitarist suffered severe head injuries. After being discharged from the hospital, the musician teamed up with drummer Cozy Powell and producer Mickie Most and founded The Jeff Beck Group.

In October 1971, the band, which included Bobby Tench, Max Middleton, and Clive Chaman released the first album called Rough and Ready. The record consisted of seven songs and marked the beginning of the formation of Beck's signature style, based on Soul music, Rhythm & Blues, and Jazz elements.

After the release of the second record, the band changed the line-up, got a lead singer, and went on a tour of the cities of Great Britain, the United States and the Netherlands presenting the album Beck, Bogert & Appice. One of the concerts aired on Rock Around the World show, and later was released on video by the Japanese company, Sony.

In 1975, Jeff left the band and recorded solo albums Blow by Blow and Wired, demonstrating his extraordinary skills. The record took fourth place in the charts and became the most commercially successful release of the musician.

Beck, with the support of The Mahavishnu Orchestra band, organized a series of concerts, that lasted until May 1975. The audience especially remembered the performance in Music Hall in Cleveland, when the guitarist, dissatisfied with his own sound, broke the legendary Stratocaster instrument on stage.

In the 1970s, the musician had problems with tax, and he lived in the United States for some time. After returning to his homeland in 1980, he released the album There & Back, which included songs written in collaboration with Jan Hammer, followed by a long international tour.

In 1981, the musician participated in a series of historical performances with Eric Clapton, known as The Secret Policeman's Other Ball show and organized a series of charity concerts with the support of the Yardbirds band.

A new album under the title Flash appeared in 1982. "People Get Ready" became the main hit of the record, performed by Rod Stewart and released as a single. The performers starred in the music video for this song and got even more fans after its heavy rotation on MTV channel. Then Beck was offered a role in Twins movie, where he played the guitar together with American pop-singer Nicolette Larson.

In 1985, Jeff's four-year break from his creative work started, during which the musician struggled with noise in his ears that he got after the car accident. When the illness receded, Beck recorded Jeff Beck's Guitar Shop disc, where he first demonstrated the fingerstyle of guitar playing.

In the 1990s, the musician left his solo projects and participated in the performances of Roger Waters, Paul Rodgers, Jennifer Batten, and Guns N' Roses band, and then released the album Who Else!, receiving two Grammy awards for "Dirty Mind" and "Plan B" songs.

On April 4, 2009, Beck was introduced into the Rock and Roll Hall of Fame as a solo performer and got an honorary certificate from the hand of his former colleague Jimmy Page. At the awards ceremony, the guitarist performed "Train Keep a-Rollin' " song together with Ronnie Wood, Joe Perry, and musicians from the Metallica band.

A year later, Jeff presented to the world the record Emotion & Commotion, in which singers Joss Stone and Imelda May sang vocals, and then recorded the song "I'd Rather Go Blind" with American singer Beth Hart. In 2014, the musician started a world-tour, and two years later, he released his eleventh studio album under the title Loud Hailer.

In his youth, Beck got married to Patricia Brown, but because of his bad temper, the couple's love life didn't work out, and the two, having no children together, broke up in 1967.

After living alone for 30 years, Jeff found a new love, Sandra Cash, who in 2005 became the second wife of the legendary guitarist. The woman accompanies her husband on tour and supports his charity work in the wildlife fund Folly.

The musician is interested in the classic hot rods of the Ford brand and devotes his spare time to restoring the original look of the retro cars.

Jeff Beck has a net worth of $18 million. After the concerts, which took place in the summer of 2018, the guitarists took a break from the stage and now is resting from the tour. He lives together with his wife in their house in East Sussex and works in a recording studio.

The rumor has it that in 2019, the musician plans to finish the work on a new album What Might Be A Back-To-Roots and prepare for the next world tour, scheduled for 2020.

Jeff Beck has a net worth of $18 million.