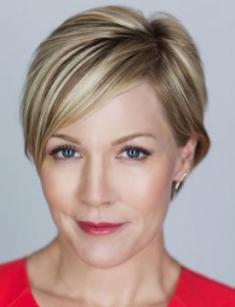 Jennifer Garth is a popular American actress. The Russian audience fell in love with her for her role in the cult television series Beverly Hills, 90210. The bright and cheerful heroine of Jennie attracted attention from the first minutes. However, there are many talented works and projects in addition to this series in Jennifer Garth`s biography.

Jennie Garth (Jennifer Eve Garth) was born on April 3, 1972. The childhood of the future actress took place in a quiet town of Urbana, Illinois. The large Garth family (Jennifer has six sisters and brothers) lived on a ranch. John Garth, Jennie's father, worked as a school administrator and her mother worked as a teacher.

Her family was not wealthy and Jennifer wore clothes from elder sisters and brothers. The future star did not show special talent at school. It seemed that the fate of the girl was apparent: she could work as a salesman in one of the city shops or as a secretary in some small office, it seemed impossible to achieve success in a provincial urban. However, her fate was different.

Jennifer's parents decided to move to another state. So, the girl was in Glendale, Arizona, when she was 13 years old. Perhaps this move predetermined the fate of the performer. Jennie enrolled in a dance school, studying acting, she worked as a model in Arizona. She got the main prize at one of the local competitions at the age of 15. James Randi noticed a young talent there.

Jennie receives an offer to move to Los Angeles and make a career. Garth and her parents reacted to this idea with skepticism for the first time. However, her dreams came true and the girl moved to the city of dreams together with her mother, who supported the daughter. The actress remembers that Los Angeles immediately struck her by the luxury and brightness but the reality was far from ideal. The girl had to go to the auditions tirelessly, arrange meetings with producers and get used to frequent refusals.

There were so many refusals and failures that Jennie Garth thought that this idea was a failure and it was necessary to come back home and forget about courageous dreams. But the girl was lucky: she got the first significant role of Ericka McCray in the television series Brand New Life. The audience fall in love with the series, Jennifer had the first fans, the first income from filming and new offers from serious producers. However, the actress became very famous a year later.

In 1990, Jennie got the role of Kelly Taylor in the TV series called Beverly Hills, 90210. Initially, it was assumed that Jennifer`s heroine would appear in several series but the audience liked her so much that the director decided to remain Garth in the series. This role becomes one of the key roles of the project after a while.

The role of Kelly Taylor was a severe test for the talented performer Jennifer Garth. The heroine had a lot of troubles: the fear of contracting AIDS, the fight against drug addiction, problems with her mother, who was a drug addict, terrible burns, which were received during the fire, attempts to escape from the sect. However, Jennie coped with such a problematic role brilliantly. The TV star could play fear and despair and the joy because terrible difficulties were behind her.

Jennifer starred in the series Beverly Hills, 90210 for 10 years. In 2000, the series ended, the actress had invaluable experience, new friends and even more fans around the world.

Jennifer was awarded the prize Best Young Actor for her role of Kelly Taylor. Besides, the girl acted as a director of a couple of episodes in her favorite series. Jennie Garth`s filmography continued to replenish at the end of the series Beverly Hills, 90210. The actress got the leading roles in such tapes as Falling for You, Lies Of The Heart: The Story Of Laurie Kellogg, An Unfinished Affair and others.

Fans expected movies with the participation of Jennifer Garth with impatience. The performer was included in the lists of the most talented people in Hollywood and the sexiest women. 2002 brought Jennie a role in the project What I Like About You. The TV star starred in this series for four seasons, playing one of the main characters. In 2007, Garth received a role in the tape Girl, Positive, for which she received the prestigious Prism Awards.

The admirers of Jennie Garth were always interested in her own life. The TV star married three times officially. The first lover of beauty was Daniel B. Clark, a successful musician. The happiness of the spouses lasted two years. In 1996, Garth and Clark divorced.

Jennifer announced a new affair after the divorce. Peter Facinelli, who is known for his role of Carlisle Cullen in the series Twilight, was the lover of the actress. The couple legalized their relationship in 2001. Jennifer Garth`s children were born in this marriage. It seemed that the family idyll would last forever but it did not happen. In 2012, the star couple announced about their divorce.

Jennie Garth`s ex-husband, Peter Facinelli, admitted in an interview that the differences in the relationship began long ago but he and Jennie made serious efforts to save the marriage for a couple of years. However, they did not manage to do it and Jennie was left alone again.

There were rumors that Jennie Garth began dating Luke Perry, a former partner in the series Beverly Hills, 90210. Fans of the actress were delighted with the news but Jennie Luke Perry did not comment on these rumors.

In 2015, Jennie Garth married again. The actor Dave Abrams became the third husband of the actress. The man is nine years younger than Jennifer but this fact does not prevent lovers from being happy in marriage.

In 2016, Jennifer Garth shocked her fans with her appearance. There were rumors of unsuccessful plastic surgery or beauty injections. There were a lot of comments on Instagram. Jennie Garth is an award-winning American actress and director with an estimated net worth of $5 million.

In 2017, The fans had to worry about their favorite actress a year later: Jennie Garth is much better now, judging by the latest photos. However, fans of the actress hope that Jennie will pull herself together and new movies with the participation of Jennie Garth will begin to appear on the screen.